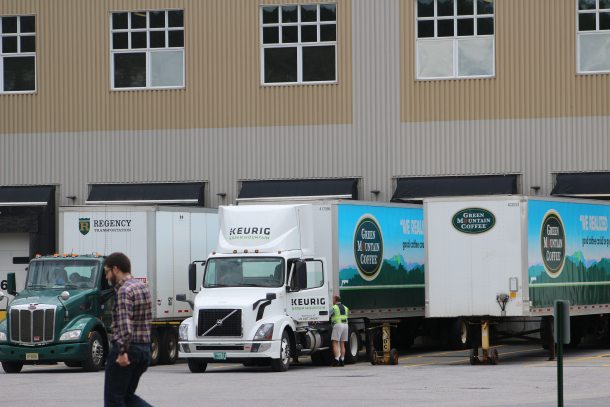 The Keurig Green Mountain headquarters in Waterbury on Tuesday, when the company announced it laid off 108 workers. Photo by Erin Mansfield/VTDigger

[W]ATERBURY — One hundred and eight people in Vermont lost their jobs with Keurig Green Mountain on Tuesday as part of the company’s decision to discontinue its unpopular cold drink-making machine.

The company is headquartered in Waterbury, where it started as Green Mountain Coffee Roasters and became famous for its single-cup coffee makers and proprietary single-serve ground-coffee cups called K-Cups.

The company moved on to the new machine, Keurig Kold, which allowed customers to make single-serve beverages such as soda and cocktails. The product, manufactured at a plant in Williston, was quickly labeled “a flop” in the business press.

Suzanne DuLong, a spokesperson who works out of Massachusetts, said all of the 108 workers in Vermont who are losing their jobs have been notified, and most had jobs related to Kold. She did not know how many workers at each location were laid off.

Workers will receive severance benefits and be encouraged to apply for one of 200 jobs the company has open around the country, DuLong said. Keurig Kold customers will be able to get a full refund on their machines, she said, because all Kold products are being discontinued.

This is the second time in less than a year that Keurig has laid off Vermont workers. On Aug. 6 the company laid off 200 in Vermont, largely at the Waterbury plant, and encouraged displaced workers to apply for open jobs at the Kold headquarters in Williston and other parts of the company.

Gov. Peter Shumlin said the state would offer the newly jobless some help. “The Department of Labor is already working to provide rapid response services and connect affected workers with the many Vermont companies currently hiring and expanding,” he said in a statement. He said his administration “will do everything it can to help these Vermonters find employment elsewhere as quickly as possible.”

“From conversations with Keurig, we understand these layoffs to be related to the canceling of the first generation Keurig Kold system and that other parts of the company will not be affected,” Shumlin said. He called the layoffs “a business decision” unrelated to the 18,000 jobs created in Vermont since he took office.

Lt. Gov. Phil Scott, who is running to replace the outgoing governor, said the following in a statement: “For my part, I will work in conjunction with state leaders, agencies and the employees themselves to get them back to work here in Vermont.”

“Going forward, I hope we can make the economy a priority so that more companies like Keurig can innovate and bring products and services to consumers around the world from home bases in Vermont,” Scott said.

JAB Holding Co., a company based in Germany, bought Keurig in December. The parent company is private and most recently entered a deal to buy the doughnut giant Krispy Kreme.

Previously, Keurig moved its coffee-buying base to Switzerland to avoid paying U.S. taxes. The company has also been a regular recipient of cash grants through the Vermont Employment Growth Incentive program and was approved for $7.7 million in four separate payouts since 2007.

DuLong said the failed Kold system was “a pioneering execution” in which the company “learned a lot — including that customers are willing to embrace the concept of a system that delivers fresh-made, cold beverages in the home.”

“We know that the success of our products is fundamentally rooted in the trust and support of our consumers and their willingness to embrace our innovations, and we are grateful to all of our consumers who have supported our company in the innovation of single-serve beverages,” DuLong said.

Thanks for reporting an error with the story, "Updated: Keurig lays off 108 in Vermont, drops ‘Kold’ machine"