An artist’s drawing shows the Harmony Place development proposed for the space behind Brooks House in Brattleboro.

BRATTLEBORO — The planned “reinvention” of downtown Brattleboro’s Harmony Place isn’t an economic development project in the traditional sense: It won’t directly create or retain jobs, and it doesn’t carry a big price tag or occupy much land.

But the project — which includes a park and performance stage — is still attracting attention.

That’s partly because Harmony Place will serve as an exclamation point to the $23.6 million redevelopment of Brooks House, a landmark ravaged by fire five years ago. And it’s also because backers believe an additional community gathering spot has inherent value for the downtown area.

“It is to provide a green space,” said Bob Stevens, a Brattleboro engineer involved in both the Brooks House and Harmony Place efforts. “But also, the purpose is to add life and activity to Main Street.” 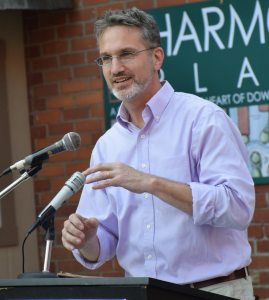 Stevens joined local and state officials Tuesday to officially kick off the Harmony Place project, situated behind Brooks House and adjacent to the town-owned Harmony Parking Lot. The event included ceremonial sledgehammer whacks against the former Frankie’s Pizza building, which will be razed to make way for features including a stage with room for 150 seats, a fountain, tables, trees, flowers and special lighting.

Another concession to the greening of Harmony Place is that vehicle traffic will be permanently barred from a nearby tunnel connecting to High Street. While acknowledging some complaints about that change, Stevens said Brooks House owners are standing by their decision to keep drivers out of the tunnel.

“From early on when the Brooks House team was looking at this, we felt that we could do better than having a space dedicated to cars,” Stevens said. “Maybe there was a way to use this space to add to the activity of downtown.”

Developers note that the main entrance to Community College of Vermont and Vermont Technical College — both Brooks House tenants — will open onto the new Harmony Place park. They envision the space as “a shaded escape, a social hub for lunch or coffee, a gateway to downtown businesses and a campus quad for college students.”

Harmony Place also is expected to host a wide variety of special events that could include live performances, movies, a farmers market, craft fairs and festivals.

“It’s not just putting in a couple of park benches and all of a sudden it’s going to succeed,” MacKay told a crowd gathered for Tuesday’s ceremony. “Great parks … bring people downtown, they stay, they invest, they shop. Really, the goal is to make sure that our downtowns survive.”

The importance of urban green space is underscored by the creation of Parks and Plazas Inc., a Brattleboro-based nonprofit that will fund design and development of Harmony Place as its first project.

Several other entities are involved in the project. Stevens said future physical maintenance will be handled by the Brooks House owners, who also own Harmony Place. Also in the mix is Bast Investment Co. LLC, which owns an adjacent building, and Downtown Brattleboro Alliance, which could assist in making the park a busy place.

“Creating spaces that bring people together like this is really so heartwarming, but it’s also really quite essential for the economics of Brattleboro,” said Michelle Simpson-Siegel, who presides over the downtown alliance’s board and is executive director of Oak Meadow, another Brooks House tenant that provides programs and curricula for home-schoolers. 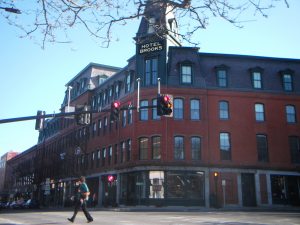 The Harmony Place project won’t take shape right away. Officials said Tuesday they have received a $100,000 “matching challenge” donation from a group of private donors, but much more fundraising is needed to reach the project’s estimated cost of $500,000.

While demolition of the former Frankie’s Pizza building will begin this week, “most of the (Harmony Place) work is probably for next construction season,” Stevens said. “It’s going to take some time to raise the money.”

Members of the Brooks House team are no strangers to raising money. A mixture of public funds and private financing brought the hulking Main Street building back to life after an April 2011 fire rendered it uninhabitable.

The ownership group purchased the property in summer 2013 and celebrated a grand reopening in fall 2014. As had been the case before the blaze, Brooks House hosts a mixture of residential and commercial tenants, but the addition of the two colleges is a big change.

“That was huge to have them as anchor tenants,” Stevens said. “That helps us pay the mortgage.”

Gov. Peter Shumlin’s administration supported the Brooks House project, with Stevens saying that “the state did everything that they could and everything that was necessary to put the building back in use.”

Public money was critical, he added, because the cost of renovations far exceeded the building’s $8.6 million appraised value upon completion. Brooks House advocates knew they couldn’t borrow enough on their own to get the building, which dates to 1871, back into service.

In the end, “the group of partners who took this project on — our motivation was to save the building and to try to be transformative in the downtown,” Stevens said. “It was a civic-minded project.”

Harmony Place, Stevens added, “is really a continuation of a vision that started with the Brooks House.”

Thanks for reporting an error with the story, "Park seen as finishing touch on Brattleboro’s Brooks House"