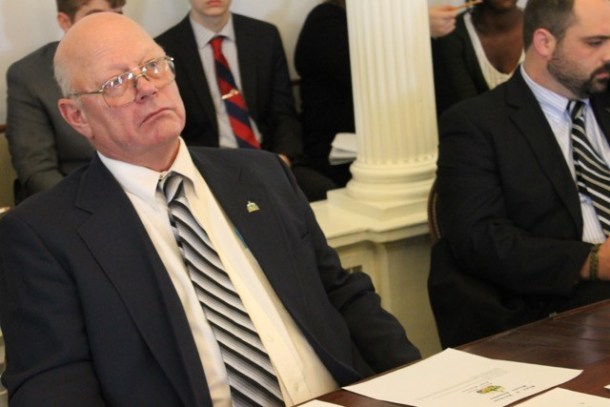 Sen. Norman McAllister was suspended by his fellow senators at the start of the session. File photo by Jasper Craven/VTDigger

(Editor's note: This story was expanded with comments from Norm McAllister and others May 23 at 6:35 p.m.)

[S]tate Sen. Norm McAllister, who faces a trial next month on sexual assault charges, has filed his paperwork to run for re-election.

The Franklin County court operations manager, Jim Pelkey, said McAllister dropped off his paperwork around 10:30 a.m. Monday with at least the 100 signatures of county residents needed to get on the Aug. 9 primary ballot.

McAllister was arrested outside the Statehouse at the end of the 2015 legislative session. He was charged with three counts of sexual assault and three counts of a prohibited act in what law enforcement describes as a scheme in which he pressured women into sex in exchange for housing and employment.

The senator, who was suspended by his colleagues but maintains he is innocent of the charges, said Monday he’s running for a fourth Senate term because he feels he has unfinished business in Montpelier.

“There’s still a lot of work to be done down there that isn’t going to get addressed by the people who are there,” McAllister said, adding that without his presence on the Senate Agriculture and Forest Products Committee there isn’t a strong voice for dairy farmers in the Legislature.

He said he collected the candidate petition signatures over a three-day period, visiting most towns in the county. Virtually everyone who signed was supportive, according to him, and some expressed frustration that he was suspended.

The senator said there was one constituent, a longtime supporter, who was angry with him and would not sign the petition, but ultimately agreed he would withhold judgment until the outcome of McAllister’s trial scheduled for June 15. The charges are to be addressed in separate trials, but the others haven’t been scheduled.

The filing deadline for candidates is Thursday.

McAllister will face off against state Rep. Carolyn Branagan, of Georgia, and Franklin County Sen. Dustin Degree in the Republican primary for the county’s two Senate seats.

Asked how he felt forcing a primary involving Degree, his current seatmate, McAllister said, “I don’t look at it as facing off with Dustin. I just look at it as I’m running.”

McAllister said he was disappointed in Degree for not supporting him after the charges were filed but still considers him a friend. McAllister said he and Degree spent the 2012 and 2014 election cycles working closely on their campaigns. That coincides with much of the period during which the sexual abuse is alleged to have occurred.

“We practically lived together through the campaign cycle,” McAllister said. “He knows more than what a lot of people do. He was with me.”

“It was political. He had to do what he had to do,” McAllister said of Degree’s decision not to talk about the criminal allegations.

The state’s charges broadly allege that McAllister coerced a woman who worked on his farm, and another woman who worked both on the farm and as a paid intern in Montpelier, into unwanted sex. McAllister is also accused of soliciting sex from a third woman, who has since died.

The trial addressing his alleged sexual abuse of the former intern is the one scheduled for June.

Degree acknowledged Monday that he and McAllister were together through much of the 2012 and 2014 campaigns but said he did not wish to comment on the allegations, citing McAllister’s upcoming trial.

“I think it’s been disappointing for everybody all around,” Degree said. “The way we deal with these situations in our country is to have a trial with a defense. I’ve always hoped that he would get that, and that’s what he’s going to get next month.”

McAllister called Degree on Saturday to tell him he was thinking about running and to seek Degree’s guidance. Degree said he was driving at the time, and the two agreed to talk later. That conversation hasn’t happened, Degree said.

“To be honest, I’m about done talking about this whole thing,” Degree said. “It’s been over a year now, and my focus is squarely on the folks of Franklin County and trying to do my best to represent them.”

As for the primary against his old political ally, Degree said he would try to keep the focus on his record in the Legislature and “let the voters have their say.”

Many party members have called on McAllister to resign. Vermont GOP Chairman David Sunderland said Monday he was surprised to learn McAllister had filed for re-election. Sunderland said he had not spoken with McAllister since a brief conversation shortly after the news of his arrest broke.

“I don’t think he should run, and if he were to run, I don’t think it’s the best thing for him to run as a Republican,” Sunderland said.

While Sunderland said he does not want to pass judgment on McAllister’s guilt or innocence, he said the conduct captured in phone recordings by state police is inappropriate for a sitting senator and something Republican voters would find objectionable.

In one recording investigators presented in their criminal affidavit, McAllister tells one of his alleged victims, “I knew I was forcing you to do something you didn’t want to do,” referring to a sex act that caused her pain.

It does not appear McAllister discussed his re-election decision with the Franklin County Republicans either.

Randy Brock, a longtime Franklin County Republican who is running for lieutenant governor, said he was not aware that McAllister had decided to seek re-election.

Brock, who is active in the Franklin County GOP, said McAllister’s potential candidacy was not discussed at any meetings or forums he’s attended. Richard Dickinson, Franklin County Republican chairman, did not return a message left for him at the St. Albans dental practice where he works.

“It’s obviously — you know we live in America, where people are innocent until proven guilty … but you can’t help the observation that public opinion will be a factor in all of this,” Brock said.

It will be no simple task for McAllister to claw his way out of a primary with two other well-qualified Republican opponents, Brock said, especially given the charges he faces and the likelihood that not all of them will be settled before the primary.

“I think it would be, at best, a very difficult race,” he added.

Thanks for reporting an error with the story, "Updated: McAllister files for re-election as sex assault trial nears"