[A] new database maps businesses that operate in a cooperative model across the state of Vermont.

The census, unveiled last week, tracks a total of 130 businesses across sectors including food, energy, education and housing, as well as credit unions. 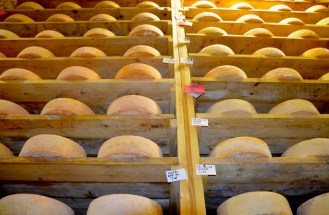 The project, put together by the Massachusetts-based Cooperative Development Institute, is sponsored by two of the state’s most prominent cooperatives: the Vermont State Employees Credit Union and Cabot Creamery.

Joe Bergeron, president of the Association of Vermont Credit Unions, said there was a burst of interest in the cooperative model after the economic crash in 2008.

“As consumer-owned, locally controlled, democratically controlled entities, there was a natural inclination for the consumers of a certain mindset to gravitate in that direction,” Bergeron said.

Bergeron said the data is an indicator of how prevalent the model is in Vermont.

“What is more telling is not just the number of cooperatives, but how many people do business with cooperatives,” he said.

That number isn’t clear, but according to Bergeron, 54 percent of Vermonters work with credit unions. It’s likely, he said, that percentage increases when taking into consideration cooperatives in every sector.

The next step, according to Bergeron, will be to research and measure the total impact that cooperatives have on the state’s economy. “And we think it’s very substantial,” he said.

Nate Formalarie, of Cabot Creamery, said the census was a good first step at building a network of cooperatives in Vermont.

Cabot’s senior vice president of marketing, Roberta MacDonald, was a leader in pushing for the research.

Cabot works with member dairy farms throughout Vermont, but Formalarie emphasized that the model is similar across sectors. “No matter the industry that the cooperative is, the mission is to benefit the members,” Formalarie said.

Formalarie said the census will help to build up partnerships between cooperatives in different lines of business.

“We now know where we are and what we have in the state and what industries are represented,” Formalarie said. “Now it’s time to take it to the next step and figure out if there’s ways to cooperate with each other.”

Rob Miller, CEO of VSECU, said cooperatives are a powerful tool not just for economic development, but also for community development.

“There’s a desire among a lot of us to really do more to support and grow the cooperative sector in Vermont,” Miller said.

In fact, Miller said, supporting other cooperatives is one of the key principles of being a co-op.

“Our belief is that cooperatives are an important part of the economy because they are inherently sustainable,” he said, noting they are locally owned and managed.

In tandem with the unveiling of the census results, VSECU also announced a new investment initiative. Named “Co-op Capital,” the program will make equity investments in other cooperatives.

“There’s no reason to believe frankly that Vermont couldn’t evolve into the same kind of example,” Miller said.

Thanks for reporting an error with the story, "Census finds 130 cooperatives in Vermont"