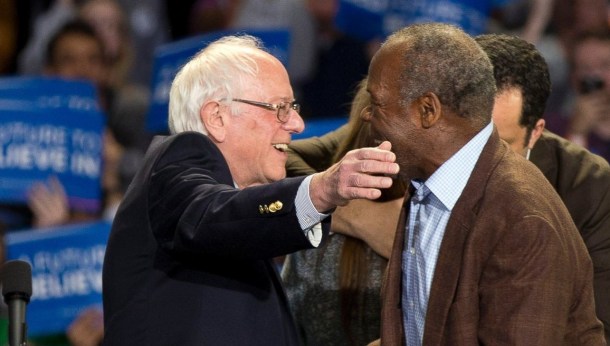 The first lesson to be learned from the failure of the Bernie Sanders presidential campaign is the most obvious: In this country, a left-of-center “political revolution” is doomed without the support of nonwhite voters.

It isn’t that there are no white voters who are as unhappy as Sanders about the shortage of good jobs, the trade agreements that they think shipped so many of those jobs overseas, and the opulent displays of the billionaires Sanders so regularly assails.

But many of these white voters blame the (largely Hispanic) immigrants and the (disproportionately African-American) poor who “get all the benefits,” as one Donald Trump supporter said on television, as much as they blame the billionaires.

Some are also more likely to be angry about secularism, legal abortions and same-sex marriage than about the economy. These white voters might be ready to join a “political revolution,” but not the leftish revolution Bernie Sanders wanted to lead.

For that to succeed, he needed black and Hispanic voters, and he did not get nearly enough of them. He tried. He had the credentials: his arrest for demonstrating against racial segregation during his student days in Chicago, his support for civil rights and immigrant rights in Congress, his solidarity with low-income workers. He recruited celebrities: filmmaker Spike Lee, rap artist Michael Render (Killer Mike), actor George Lopez, TV personality Nancy Alvarez.

But he didn’t have the connections.

At least he didn’t have the connections that Hillary Clinton had, not just with political leaders of the black and Hispanic communities, but with the rank-and-file voters of those communities. They liked her husband’s presidency. They liked the fact that she (and he) had kept visiting them and talking to them in the years since that presidency. They appreciated her, and they connected with her.

That connection is based on intangibles and so is hard to describe. Clinton has and Sanders could not find the right style, the phrasing, the demeanor that would connect with enough nonwhite voters, especially in the South, where Clinton piled up huge delegate leads.

The difference was pivotal, and — for Sanders — fatal. Exit poll results are not exact vote totals. But they do at least point to the possibility that more whites voted for Sanders than for Clinton in the primaries. But she easily outpaced him among Hispanics and won African-American votes by even larger margins.

OK. Let’s pause in this exercise and go back to the top for a moment to deal with objections some people may have with part of the opening sentence: “the failure of the Bernie Sanders presidential campaign.”

Two objections are possible (if not inevitable). One is that — with nine primaries and one caucus still to go — he has not yet failed to win the nomination.

It’s over. Sanders himself knows it. After losing four of five primaries Tuesday, he stopped talking about a possible “path to the nomination.” He has no such path. He started talking about continuing to campaign to work toward a “progressive” platform at the Democratic National Convention.

Here he may succeed, meaning it is possible that, despite not winning the nomination, the Sanders campaign was not a failure. He and his campaign are not the only reasons Clinton has moved leftward on many issues — she was moving that way anyway, as was the whole Democratic Party, as was, indeed, the whole country — but Sanders was certainly a factor here. He has done well enough in the primaries to earn a place at the Democratic table, a role in shaping the platform, a prime time speaking slot at the convention in July.

There is also the possibility that the Sanders campaign will somehow survive as a movement even after the election, continuing to influence the national political debate.

The possibility is not a likelihood. The same kind of talk has been heard from the supporters of losing candidates before. Former Vermont Gov. Howard Dean’s campaign — Dean for America — became Democracy for America after Dean failed to win the 2004 nomination.

It then fizzled. Liberal activists tend to be too diffused — trade unionists, environmentalists, black and Hispanic activists — to unify around an all-embracing political organization. But who knows? This time could be different.

This week’s and last week’s primary losses do not erase how surprisingly well Sanders did earlier. Vermonters may have been less surprised than others. His constituents knew Sanders is a good politician. He put together a first-class campaign operation made up of people who knew what they were doing and really wanted to win. And Vermonters knew that Sanders is a good campaigner. Even though his speeches tended to drag on, often for more than an hour, he held the attention of his crowds.

Well, most of them, and for quite a while. In recent weeks, even some devoted Sanders backers confessed that they were growing a little bored as their candidate kept saying the same thing in the same way, over and over.

All candidates repeat themselves. But this one seemed truly engaged only by his economic message. When he discussed other subjects — racial inequality, foreign policy, the environment — he seemed to many to be going through the motions for a few minutes until he could return to his billionaire-bashing theme. A Washington wag (some said it was Vice President Joe Biden) said, “Every sentence in a Bernie Sanders speech is a noun, a verb, ‘Wall Street.’”

Voters want their president to be consistent. But they don’t want a Johnny One Note. Perhaps one reason Sanders had trouble reaching nonwhite voters was that they sensed that even when he spoke of their specific grievances, he didn’t care as much about them as he did about his economic vision.

In the end, the Sanders message attracted some white working-class voters, or at least white working-class men. He didn’t do as well with the women. But most of his support came from the upper-middle-income white professionals and their college student children. It was essentially the same constituency that backed Dean in 2004, Gary Hart in 1984, Jerry Brown in 1992.

As usual, a lot of people got excited. The candidate didn’t get nominated.

Thanks for reporting an error with the story, "Margolis: What the Sanders campaign’s failure says about the left"