[A]fter nearly two months of procedural delays, the House is expected to discuss the controversial independent contractor bill Monday and could pass it as early as Tuesday.

Lawmakers decided unanimously Thursday in a voice vote to “relieve” the House Committee on Commerce and Economic Development of the bill, H.867. The speaker of the House said it was dead three weeks ago, and the committee abandoned it last week. 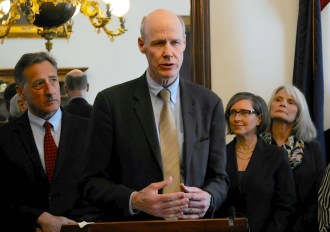 The move means H.867 will head straight to the House floor for debate — avoiding the typical lawmaking process that requires the House Commerce Committee to pass the bill first, and sidestepping the power of the House speaker to delay it further.

Rep. Bill Botzow, D-Pownal, the chair of the House Commerce Committee, made the motion on the floor. Botzow said he expected another member to make the motion, and when he found out, he worked with House Speaker Shap Smith, D-Morristown, and made the motion himself.

“I believe a bill will pass, and I believe we will have two days of amendments,” Botzow said. “Yes, it is probably more thought, anxiety, stress than to just wait until next year. However, I think there are many members in my caucus and the other caucus who really want this discussed, and I respect that.”

The bill has attracted support within the business community, while pro-labor organizations have opposed it.

“When the bill came out of the Commerce and Economic Development Committee and it started to get reviewed by the General, Housing and Military Affairs Committee, I was really concerned about a conflict between the two committees, which seemed very possible,” Smith said back then.

Rep. Heidi Scheuermann, R-Stowe, who sits on House Commerce, has been a vocal advocate for the current version of H.867. She works in the property management industry and said, for example, that current law would make it nearly impossible for her to use independent contractors.

“It’s late now (in the session),” Scheuermann said Thursday. “It didn’t have to go this way. We didn’t dictate the timing. We would’ve preferred to have a bill out on the floor when it came out of committee. But it’s late now, and it’s going to be difficult for us to get the Senate (to agree), but I’m not giving up on that.”

“But if it doesn’t, we have a message in January that we have a bill, and it came out 11-0, and it’s a good, sound public policy bill, and we can get it to the governor’s desk in 60 days,” she said.

Rep. Chris Pearson, P-Burlington, opposes H.867. “This bill satisfies the business community but hangs Vermont workers out to dry,” he said in a statement. “In my opinion, the proposal as it stands isn’t ready to become law.”

Thanks for reporting an error with the story, "Maneuver revives independent contractor bill in House"