BRATTLEBORO – More than two decades after John Grega's wife was killed in a Dover condominium – and more than a year after Grega died in a car crash – the state of Vermont will pay $1.55 million to settle claims that he had been wrongfully convicted of murder.

The settlement of Grega's state lawsuit, and the concurrent dismissal of his federal complaint, mark the end of all legal claims he had made following his release from prison in 2012 after new DNA evidence surfaced.

But even in announcing Friday's settlement, both sides continued to disagree about the most-fundamental fact of Christine Grega's death – whether John Grega was responsible. 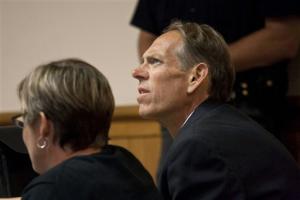 “This settlement is in no way an admission of wrongdoing by the state and does not diminish the thorough and professional investigation and prosecution of this matter to a guilty verdict 20 years ago,” state Attorney General Bill Sorrell said in a prepared statement.

Burlington-based attorney Ian Carleton, representing Grega's estate, said he was disappointed in the state's characterization of the deal.

“The bottom line is, the state does not pay $1.5 million to guilty people,” Carleton said. “As a result, this settlement speaks loud and clear about the fact that the DNA exonerated John.”

John and Christine Grega, residents of Lake Grove, New York, were vacationing with their 2-year-old son in Dover in late summer 1994. On Sept. 12, Christine Grega was found dead in the condominium's bathroom; she had been beaten, raped and strangled.

John Grega said he had been out of the condo with his son at the time of the murder. But in 1995, Grega was convicted of the aggravated murder of his wife and sentenced to life in prison without parole.

The state Supreme Court upheld the conviction in 1998.

Grega remained in prison until August 2012, when a Windham County Superior Court judge vacated the conviction because new evidence testing showed DNA from an unknown male in Christine Grega's body. Prosecutors subsequently filed an amended murder charge against Grega, then dismissed it in 2013.

That case was dismissed without prejudice, so it could have been refiled. But Grega launched his own legal assault: He sued the state for wrongful conviction under Vermont's Innocence Protection Act; and he filed a federal lawsuit against investigators alleging civil rights violations.

He did not live to see the resolution of either of those cases. In January 2015, Grega was killed in a one-car crash near his Long Island home.

Grega's family continued to pursue his lawsuits, both of which have now been resolved. Officials announced on Friday that the Grega estate had “voluntarily dismissed” the federal suit.

Vermont Assistant Attorney General Kate Gallagher said the state had been prepared to defend itself against the federal claims if that suit had not been dropped.

“We were very concerned about the allegations in that case,” she said Friday. “There was certainly nothing that we thought constituted a civil rights violation. We were not going to settle that case.”

Carleton said the Grega family “stands behind every allegation that was in the (federal) complaint.”

“It was dismissed almost simultaneously with the (state's) payment of $1.5 million,” Carleton said. “Beyond that, I think people can draw their own conclusions.”

Vermont's settlement payment resolves the suit Grega had filed in state court. But the attorney general's office still contends that the complaint's central allegation – that 2012 DNA testing showed Grega was innocent – is “unsupported by the facts.”

“The state was prepared to go to trial, especially in light of the compelling evidence of guilt presented at the criminal trial in 1995 and the fact that the new test results did not conclusively establish Mr. Grega's innocence,” Sorrell said. “But the settlement for this relatively modest amount, compared to the state's arguable exposure to over $20 million in damages under the (law), was deemed to be the most prudent course.”

Carleton had a much different take. On Friday, he reiterated his long-standing argument: “As the result of a shoddy and incompetent investigation and subsequent rush to judgment, John was wrongfully convicted for his wife's murder.”

“While nothing will make up for the suffering that John and his family endured, this settlement speaks loudly and clearly that John is, and always has been, innocent,” Carleton said.

Thanks for reporting an error with the story, "State pays $1.55M to settle Grega case"