[T]he state auditor’s office says the Tax Department does not have sufficient data to determine whether it’s doing a good job at collecting delinquent income taxes.

The auditor’s office released a report Monday saying the department was able to collect about half of the personal income taxes that were delinquent in 2013 and 2014, but “was unable to assess the effectiveness of its collection methods.” 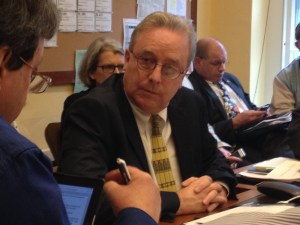 State Auditor Doug Hoffer said in an interview that the Tax Department has “completely inadequate” information technology systems for tracking who has not paid their taxes and how long those bills have been delinquent.

“They really have not had the ability to do any of the things that you would expect if you were going to do an internal self-evaluation,” Hoffer said. “It was very challenging for us to even get data, and we had to switch gears a number of times in the process.”

The audit report said the office chose to look at delinquent personal income taxes — as opposed to those paid by corporations or property owners — because the money made up about 41 percent of all delinquent taxes in 2013 and 2014.

Roughly 5,000 other accounts worth $12.4 million were closed without payment; the report says that could have happened because the people did not end up owing money after they filed relevant paperwork. An additional $7.2 million was still owed on July 24.

The report says that accounts may be adjusted on a case-by-case basis for penalties, interest and additional taxpayer information, so the amounts collected and still owed don’t add up to the original total balance.

The report says the Department of Taxes filed liens in 666 cases to recover delinquent taxes. An additional 181 accounts were being paid back using installment plans. Other cases remained in a grace period in which the department waits for a person to pay the tax bill late, instead of actively collecting the money.

The auditors had trouble finding data to determine whose wages had been garnished to pay taxes, and whose professional licenses were in jeopardy of being revoked for not paying taxes.

“Other collection methods, such as offsets to lottery winnings and bank levy, are available to (the Department of Taxes) but have not been used,” the report says.

The report makes eight recommendations to help the Tax Department improve how it collects on delinquent accounts. Those include referring more accounts to collection agencies within about six months and working with the Vermont Lottery to see if the state can collect delinquent taxes from lottery winnings.

Tax Commissioner Mary Peterson wrote in response that the audit is “a snapshot from the rear view mirror” because the department is working to modernize tax collection through an IT system called VTax.

“When Phase 3 of VTax goes live later this year, we will have the capability to fully adopt all of the business process improvements that our compliance division has been developing,” Peterson wrote.

She added that the data issues the auditor’s office highlighted represent the constraints of legacy IT systems and that delinquent tax collection “can and will be improved greatly with the rapid transition to VTax.”

Thanks for reporting an error with the story, "Auditor identifies data collection problems at Tax Department"