(Editor's note: This story was significantly expanded and updated April 14 at 6:55 p.m.) 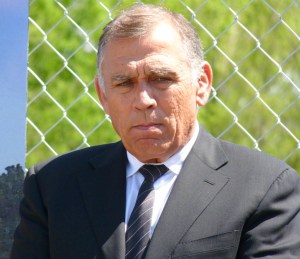 The charges against Bill Stenger and Ariel Quiros also claim Quiros spent $50 million of that money for personal use and in “other ways never disclosed to investors.”

Public officials, including Gov. Peter Shumlin, said they felt betrayed by the developers and called it a “tough day for Vermont.”

Neither Stenger nor Quiros responded to phone and email messages for comment.

According to the federal complaint unsealed Thursday, Quiros improperly tapped investor funds for the purchase of a luxury condominium, payment of income taxes and other taxes unrelated to the investments, and acquisition of an unrelated resort.

The SEC allegations say Quiros and Stenger ran a "Ponzi-like" scheme using money from one set of investors to fund deficits in earlier projects.

The charges were laid out in a federal court case in Miami, where Quiros lives.

Meanwhile in Vermont, U.S. Attorney Eric Miller said his office is investigating whether federal criminal charges should be filed. The SEC violations are civil charges, he said.

"My office has been conducting and will continue to conduct an investigation designed to determine whether or not there have been violations into federal criminal law in connection with EB-5 projects in the Northeast Kingdom," Miller said.

Miller would not say how long his investigation has been going on or how long he thought it would last. He said as of yet, no criminal charges have been filed.

In the 82-page SEC complaint, the federal regulatory body said it was taking action to "stop an ongoing, massive eight-year fraudulent scheme" in which Quiros and Stenger "systematically looted more than $50 million of the more than $350 million that has been raised from hundreds of investors" to construct resort facilities and a biomedical research facility.

“The alleged fraud ran the gamut from false statements to deceptive financial transactions to outright theft,” said Andrew Ceresney, director of the SEC’s Division of Enforcement, in a news release.

The developers solicited funding through the federal EB-5 program, which allows overseas investors to move to the United States in return for creating jobs.

The 52-count complaint gave a detailed account of how the developers allegedly perpetrated the fraud, including diverting funds.

“As alleged in our complaint, the defendants diverted millions of EB-5 investor dollars to their own pockets, leaving little money for construction of the research facility investors were told would be built and thereby putting the investors’ funds and their immigration petitions in jeopardy,” Ceresney said. 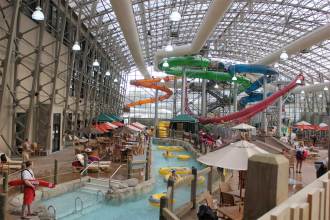 The Jay Peak water park is one of the projects for which the developers sought immigrant investors. File photo courtesy of Jay Peak Resort.

According to the complaint, "Quiros orchestrated and Stenger facilitated an intricate web of transfers between the various Defendants and Relief Defendants to disguise the fact that the majority of the seven projects were either over budget or experiencing shortfalls. These shortfalls were due in large part to Quiros pilfering tens of millions of dollars of investor money for his own use."

Stenger was far from an innocent bystander, the complaint alleges, stating that he “recklessly” ceded control of investor funds to Quiros and “did almost nothing to manage investor money, even when confronted with red flags of Quiros' misuse.”

The Securities and Exchange Commission raided the offices of Q Burke Resort on Wednesday as part of its investigation and seized computers and other property.

The federal complaint focuses on six projects at Jay Peak Resort and a $110 million biomedical research center to be built in Newport, called AnC Bio. The SEC says the developers operated the AnC Bio project “as nearly a complete fraud.”

A federal judge granted motions this week freezing Quiros’ assets and the assets of companies involved in the web of EB-5 projects. The federal court appointed Florida-based attorney Michael Goldberg as receiver to manage the companies and administer the assets of the EB-5 projects named in the complaint.

Goldberg “has managed some of the largest Ponzi scheme liquidation recoveries in U.S. history,” according to the website of his law firm, Akerman LLP. Shumlin said at Thursday’s news conference that Goldberg and his team are on the ground in the Northeast Kingdom. The governor added that based on his conversation Thursday with Goldberg, he doesn’t expect significant job losses.

Day-to-day operations at Jay Peak and Q Burke resorts are being overseen by Leisure Hotels & Resorts, of Prairie Village, Kansas.

In an email Wednesday, Jay Peak's employees were told the resort would continue to operate normally under the outside managers’ oversight and their jobs are not at stake. The resort's communications director, JJ Toland, told employees that Quiros and Stenger remain the owners but "have no authority to conduct business or direct operations of the resort until the SEC matter is concluded."

The federal judge’s orders also prohibit Stenger, Quiros and their companies or agents from destroying documents and gave the SEC authority to “take immediate possession” of property and assets, clearing the way for Wednesday’s raid and a full investigation.

At a hearing scheduled for April 25 at the federal courthouse in Miami, Stenger and Quiros will have the opportunity to appear before a judge and ask the court to lift the temporary orders.

The SEC is seeking unspecified civil monetary penalties and “disgorgement of all ill-gotten gains” from Stenger, Quiros and their myriad companies. Money obtained through disgorgement in securities fraud cases is often distributed by the appointed receiver back to the investors.

The SEC is also asking the Miami judge to permanently ban Stenger and Quiros from participating in future EB-5 companies or offerings. Further, the feds want Quiros barred from serving as the officer or director of any publicly traded company.

Among the many misrepresentations Quiros and Stenger made to immigrant investors was telling them that their money would be used only for the specific project to which each investor contributed, according to the complaint.

Money raised for each project was first placed in an escrow account with a Vermont bank, then transferred to a corresponding account at a Raymond James Associates brokerage office in Coral Gables, Florida, which Quiros used to “perpetrate the fraud,” according to the SEC.

The SEC says it has “numerous” emails, letters, wires and telephone calls among Quiros, Stenger and the Coral Gables brokerage office.

Among other allegations, the complaint says Stenger and Quiros continue to raise money from “unwitting” immigrant investors for AnC Bio, the duo's most recent EB-5 funded project. AnC Bio is a $110 million biomedical research center that is supposed to built in Newport. The pair have raised three-quarters of that money already, according to the SEC.

The offering documents for the project are “rife with material misrepresentations and omissions,” according to the SEC complaint, including stating falsely that they were in the process of getting Food and Drug Administration approval for the center’s research products. They further projected millions of dollars in revenue based on FDA approvals “they had done virtually nothing to obtain.”

Meanwhile, Quiros and Stenger are years behind their original construction schedule for the research center, and the SEC says that as a result of their misuse of investor money, “there is little money left” in the AnC Bio accounts for construction, meaning the project is unlikely to be built.

Investors who contributed $500,000 each to the research center are in “grave danger” of losing their money and having their immigration petitions denied.

Thanks for reporting an error with the story, "Updated: Feds charge Quiros and Stenger with 'Ponzi-like' scheme"