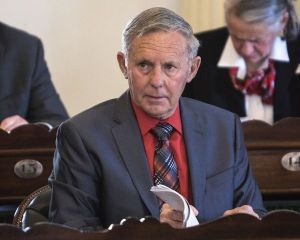 [S]enators gave a skeptical reception this week to a bill that would impose the same criteria on renewable energy development that is now used to regulate real estate development on prime agricultural soil.

Lawmakers in the Senate Finance Committee were concerned that the bill might forestall development of renewable energy projects.

The bill would have the effect of involving Agency of Agriculture attorneys in projects sited on the state’s “prime” agricultural land. Developers would bear the cost.

Sen. Tim Ashe, D/P-Burlington, chair of Senate Finance, asked Starr how he would respond to opponents who say Act 250 regulation of solar development could inhibit new projects and increase the cost of renewable energy installations.

Starr told finance committee members that he wants to balance the need for renewable energy with the need to conserve farmland, and he said the proposal could encourage solar development on more appropriate locations, such as rooftops. He said the added cost was worth it.

“People are blowing smoke about, ‘We’ve got to have this, we’ve got to get this green energy going,’ -- we don’t want to stop this, if people want solar energy, but let’s utilize the spots that’re sitting there available,” Starr said. “It may cost more, but if this is so valuable to us, why not spend a little more and do it? The cheap way isn’t always the best way.”

The bill would automatically include the Agency of Agriculture as a party to any renewable-energy proposal on high-quality agricultural land. Starr complained that agency representatives haven’t shown up at hearings for renewable developments on farmland.

“How much is renewable energy worth, compared to prime ag? As far as I’m concerned, prime ag is worth to people in the state of Vermont much more than solar energy, because you can put solar on roofs, but there’s only so much prime ag soil,” he said.

Starr initially talked about drivers’ annoyance at seeing solar panels in hayfields, and in closing he posed solar development as an existential threat to Vermonters.

“We got along for hundreds of years without electricity in this country, but we never got along without food,” Starr said.

Sen. Virginia Lyons, D-Williston, said there should have been the exact same response from the public and lawmakers “when the Wal-Mart went up in St. Albans -- that’s some of the best soil in the world; it’s good soil."

At the time, Jeff Davis, the developer, thanked Starr for his longstanding support at the project’s groundbreaking in 2014.

The state’s comprehensive energy plan estimates 12,000 acres of solar panels are needed to meet Vermont’s renewable-energy goals. The state contains about 381,000 acres of prime agricultural soil, according to the most recent statistics available from the state department of agriculture.

Starr’s bill, S.205, consists of only two paragraphs, and would apply land-use law Act 250 to renewable-energy projects sited on agricultural soil, instead of the energy-siting law called Section 248 that currently governs such projects.

Critics of Section 248 have said that it unfairly gives renewable-energy developers preferential treatment at the expense of nearby residents.

Starr delivered his testimony during the finance committee’s consideration of another energy-siting bill, S.230.

That bill offers greater deference to municipal and regional plans as a means to grant more local control over where and how renewable-energy development takes place.

CORRECTION: Sen. Tim Ashe did not assert that Act 250 rules for solar development would inhibit development as originally stated in this article. He asked Starr to respond to potential criticism about Act 250 regulation of renewable energy projects.

Thanks for reporting an error with the story, "Senators want to apply Act 250 standards to solar projects"