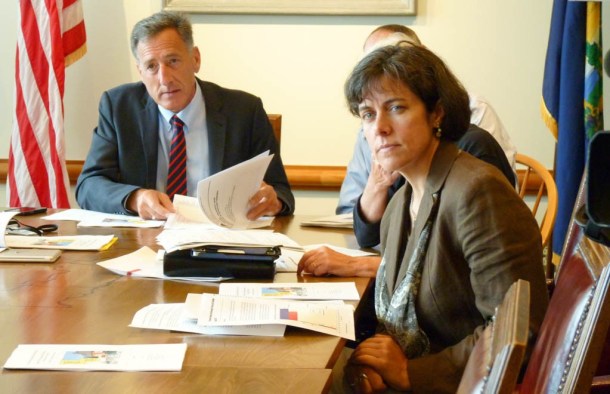 [M]embers of the House tax and budget committees commiserated Friday over the bad news: This year, just like last year, lawmakers are having trouble resolving the state’s budget gap.

And this year, just like last year, legislators are looking for a big chunk of new revenue. Last year the Legislature and the governor raised $30 million in new taxes. The nut for fiscal year 2017 is $35 million.

Last year, Gov. Peter Shumlin and Democrats in the House raised broad-based taxes: an extension of the sales tax to include soda and several changes to income tax deductions. No one is proposing increases this year on meals and rooms, sales and income taxes.

The options are limited: a $20 million hike in fees paid by mutual fund companies; $8 million in higher so-called employer assessments for large companies that don’t offer health insurance for workers; a $2.3 million bump in the franchise tax for large banks; and $3 million in miscellaneous fees.

Members of the House Ways and Means Committee squirmed in their seats as they listened to Rep. Mitzi Johnson, D-South Hero, chair of House Appropriations, explain that they needed to come up with more in tax revenues.

Most of the additional money for this budget cycle, $28 million, is for basic budget expenses that have grown as a matter of course. Of the remaining $7 million, most would largely be used for efforts to abate a growing heroin epidemic that is directly affecting families with small children. About $1 million is for boosting Green Mountain Care Board resources.

There is a disagreement between the Fifth Floor and House representatives over $9.4 million lawmakers say should be included in the base budget. The House Appropriations Committee says the governor omitted key expenditures in his recommended budget, including a pay increase for state workers (estimated at $2 million to $6 million, depending on the results of a fact finder’s report and ongoing contract negotiations), pay increases for child care and direct care workers ($1 million each), and funding for the Low Income Home Energy Assistance Program ($4 million).

As House Speaker Shap Smith put it, the governor’s budget “had some gaps in it,” and the 2.35 percent provider tax on doctors and dentists never had support in the House.

“Our choice was to address those gaps which are in spending that is already happening rather than to spend money on new proposals,” Smith said. “We were looking at a different landscape than the landscape that came to us when the governor put forward his budget. We had to make different choices, and it will be an evolving process.”

That landscape, as it appears now, is windswept. The House Appropriations Committee wiped away most of the Shumlin administration’s new spending proposals. Gone is the nearly $1.88 million Next Generation plan, which would have seeded bank accounts with $250 state contributions for newborn Vermonters who might someday want to go to college. Gone, too, is the $500,000 for the Enterprise Fund, which Shumlin has used as an incentive for big business. Not to mention the proposal to speed up court-ordered involuntary medication for mentally ill patients that lawmakers panned on arrival. And really gone is the proposal to extend the provider tax to independent doctors and dentists, which would have raised $4.8 million for a Medicaid reimbursement offset.

Johnson said lawmakers are focused on core state government spending and human services programs. Wherever possible, her committee members are “going really micro” and figuring out, for example, how to cut grants for the Boy Scouts’ annual Veterans Day parade. So far, in spite of the discrepancy between the governor’s budget and the House budget, they’ve found about $10 million in spending reductions from projected increases for fiscal year 2017.

“People are going over every single grant,” Johnson said. “And while we’re doing micro stuff, the real driver is the policies.”

Johnson said everybody hates to spend money on motels as temporary housing, but under state law, the Department for Children and Families is obliged to provide vouchers in order to protect people from freezing on the streets. To alleviate the need for using motels, the state is expanding homeless shelters, and that change is starting to lower costs for emergency housing, Johnson said.

The House Appropriations Committee wants the administration to take a harder look at who is eligible for Medicaid as part of a “redetermination” process. Lawmakers are also looking at requiring prior authorization in the Medicaid program for more than 24 mental health visits.

Justin Johnson, secretary of the Agency of Administration, said he recognizes that lawmakers are reluctant to increase the provider tax and agree to new rules for involuntary medication. He said the Department of Finance and Management will review the tax and fee proposals and work with lawmakers as they zero in on the final budget bill Friday.

“We would not support increases in rates of broad-based taxes,” Johnson said. “There’s no proposal to do that, so I think we’re all on the same page there.”

Johnson said the provider tax is tied to a reimbursement increase for doctors and dentists who see Medicaid patients for a fraction of the actual cost.

While House lawmakers scrapped Next Generation, Johnson defended the college savings account program and Step Up, an incentive for adult students who need a post-secondary degree to pursue a career, and hopes to restore the proposal in the House budget.

“It’s recognizing we need to make an investment,” Johnson said. “We have a lot of kids who never imagined going to college. The research shows a small amount of money can get them to think about that and really to start imagining that can happen.”

CORRECTION: The bank franchise tax would raise $2.3 million, not $4 million as originally reported, according to JFO.

Thanks for reporting an error with the story, "Budget writers say $35 million needed in new revenues"