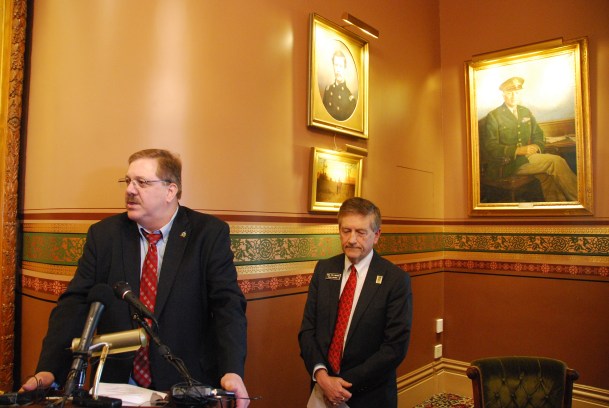 Secretary of State Jim Condos, left, and Democratic Rep. Tim Jerman announce their support of Bernie Sanders as superdelegates on Tuesday at the Statehouse. Photo by Jasper Craven/VTDigger

[V]ermont’s three remaining undeclared superdelegates backed Bernie Sanders on Tuesday, making his Green Mountain State primary victory the only one so far where a majority of the state’s superdelegates are reflecting the will of the voters.

When Sanders’ large electoral margin of victory in last week’s Democratic primary — around 84 percent — is factored into the total delegate count, he takes 22 of Vermont’s 26 delegates.

“It’s unprecedented for a candidate to win their own state by such an immense margin,” Condos said in a news conference Tuesday. “In the stunning show of support, Bernie also won every single town in the state.”

Deans said her support was personal and did not amount to an endorsement from the state Democratic Party.

The Tuesday pledges were all influenced by Sanders’ strong electoral showing in Vermont. Jerman and Condos said they had received letters urging support for Sanders and had been directed to a MoveOn.org petition demanding superdelegates follow the will of the voters.

The delegates said no Clinton or Sanders staffers had lobbied for their support. Nick Carter, Sanders’ political outreach director, who is responsible for delegates, attended the Statehouse announcement and declined to comment.

The three other Vermont superdelegates backing Sanders are U.S. Rep. Peter Welch; Richard Cassidy, a lawyer who served in the administration of former Gov. Howard Dean; and Sanders himself, who as a member of the state’s congressional delegation is granted a vote.

A vocal contingent of Sanders supporters has criticized Clinton’s Vermont superdelegates for not following the will of the people. Over the weekend, Dean got into a heated Twitter war over his support for Clinton, with one critic writing, “You continue to bury what little reputation you had left with the Progressives.”

At Sanders’ Super Tuesday primary party in Essex last week, a supporter held a sign critical of the state’s senior U.S. senator. It read, “Pat Leahy, why aren’t you here?”

On Tuesday, Condos and Jerman said their Sanders support was not influenced by the backlash aimed at Clinton’s superdelegates, but both identified issues with the superdelegate system. Condos said he wished the system were completely proportional, and Jerman said he had “concerns about the perception of unfairness about the process, and I will work to promote changes at the national level.”

Clinton leads Sanders in proportional delegates, 672 to 477, according to The New York Times. When superdelegates are factored in, Clinton’s lead becomes much larger, 1,130 to 499.

The Sanders campaign hopes to catch up in upcoming contests in large states like California and New York. He has also been campaigning aggressively in Michigan and hopes to net a good number of the state’s 147 delegates Tuesday night.

Advisers say that if Sanders can catch up to Clinton in Democratic delegates, they expect that her superdelegates will defect to the Vermont senator.

Jerman added a caveat in his endorsement, saying that if Sanders drops out before the Democratic National Convention in July he would back Clinton.

Thanks for reporting an error with the story, "Remaining Vermont superdelegates pick a side: Sanders"

In St. Albans, a longstanding dispute over public utilities rears its head