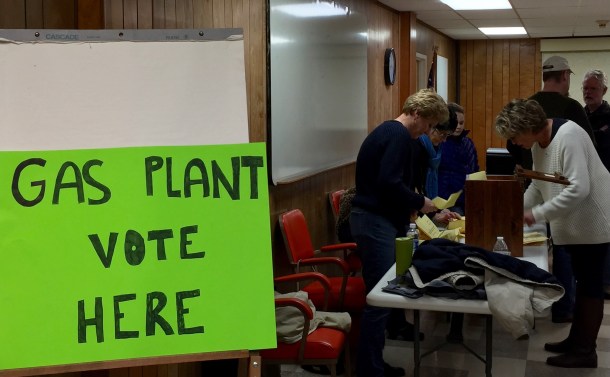 VERNON — Voters on Tuesday overwhelmingly supported a proposed gas-fired power plant, paving the way for developers to push forward with a 600-megawatt facility that could be built in the shadow of Vermont Yankee.

The vote was 677 to 153 in response to a nonbinding referendum question: “Do you support a natural gas-fired electric generating plant being located in Vernon?”

Winhall resident Don Campbell, who has been leading the plant development charge, called the results “breathtaking” given how many questions had been raised about the proposal.

“I’m very pleased with the outcome of the vote and the community support,” Campbell said. “I think that this sends a very strong signal to investors who are weighing Vermont versus other potential generating sites.”

At the same time, Campbell made clear that Vernon residents’ approval was only the first step in the process. A gas plant will require state and federal permits, not to mention substantial financial backing for a project with an estimated price tag of $750 million.

The next step, Campbell said, is “to engage with the broader Windham County and southern Vermont regions, and the state.”

Even as that happens, Vernon Planning Commission officials pledged to keep working on the issue as well.

“Even though the board didn’t take a position (on a gas plant), with voter approval we will be happy to continue to investigate,” commission Vice Chair Janet Rasmussen said after the ballots were tallied Tuesday night.

“Certainly the town has a need for the revenue, as it didn’t cut the budget very much (Monday) night,” Rasmussen said. “And it’s been clear that the region needs more power generation.”

There had been no shortage of debate before Tuesday’s vote. The Planning Commission got the ball rolling by meeting numerous times with Campbell and his partner in the project, Hervey Scudder, of Brattleboro. 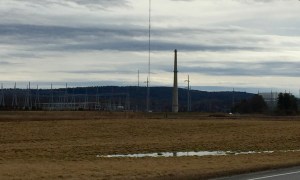 Land just north of Vermont Yankee, visible on the far right, and an electrical switchyard is being considered for a gas-fired power plant in Vernon. File photo by Mike Faher/VTDigger

Campbell, who has a background in utility investment, pitched an ambitious plan: Build a natural gas-fired power plant near Vermont Yankee, taking advantage of the massive electrical infrastructure left behind by the shuttered nuclear plant.

The gas plant would be fed by a 7-mile spur from the proposed Kinder Morgan Northeast Energy Direct pipeline that may pass through northern Massachusetts on its way to New Hampshire.

Plant advocates say the Vernon facility would be a relatively clean-burning source of electricity as well as an economic engine, bringing much-needed jobs and tax revenue in the wake of Vermont Yankee’s December 2014 shutdown.

But many detractors urged a no vote on the gas plant issue.

There was opposition to Kinder Morgan’s pipeline, which would carry gas obtained by the controversial practice of hydraulic fracturing. The pipeline has not yet received federal approval and has spurred vehement opposition in some Massachusetts and New Hampshire towns.

Opposition to locating a gas plant in Vernon also was evident, with some residents wondering about air pollution and safety — especially with Vermont Yankee’s radioactive spent nuclear fuel stored nearby.

The Planning Commission hosted two well-attended public forums on the gas plant. Throughout the process, commission members and Campbell stressed the importance of community buy-in and said they would stop pursuing the project if voters opposed it.

The possible location of the plant had been the subject of guesswork until the second public forum, held Feb. 3. That night, Vernon resident Art Miller disclosed that he and his family had been approached by plant developers; family members are considering selling a portion of their organic dairy farm on the eastern side of Route 142 just north of Vermont Yankee.

Campbell has acknowledged that the Miller parcel may be the best site for a gas plant. But apparently no land deal has been completed.

“The Millers have been very, very supportive of the concept of the gas plant,” Campbell said after Tuesday’s vote. “We continue to have a very open and supportive dialogue with the Miller family.”

“I think the gas plant became a huge issue in this town,” said Patty O’Donnell, a commission member. “People are worried about what our future’s going to be, so it’s no surprise that would draw people out to vote.”

Thanks for reporting an error with the story, "Vernon voters back proposed gas-fired power plant"