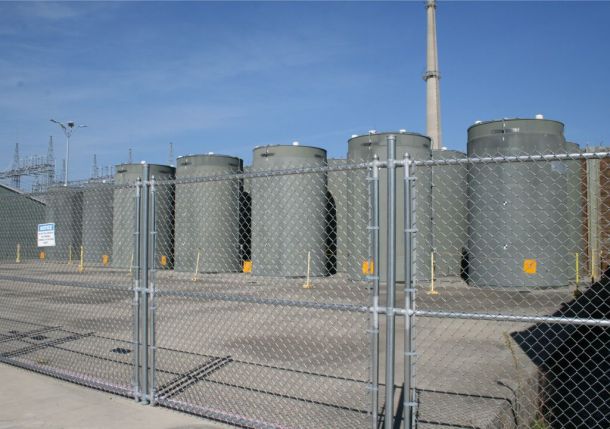 [B]RATTLEBORO — The quest to build a 76-by-93-foot concrete pad at Vermont Yankee already has generated reams of written testimony and hours of debate.

Later this month, the state Public Service Board will extend that debate by holding two days of technical hearings on the topic in Montpelier.

The scrutiny is because the pad eventually will bear sealed casks containing the Vernon nuclear plant's radioactive spent fuel. Though many questions likely will be raised during the Feb. 23 and 24 hearings, Entergy administrators say they remain confident the pad — which would be Vermont Yankee's second such storage area — will get the state's OK relatively soon.

“We expect approval, if everything goes according to the schedule, in May 2016,” said Joe Lynch, Entergy Vermont Yankee's government affairs manager. “And then we will start construction of the second pad later this year.”

Though Vermont Yankee stopped producing power more than a year ago, most of its spent fuel remains in a pool inside the plant's reactor building. Entergy has pledged to have all of that fuel moved into more stable dry casks by the end of 2020.

There are 13 loaded casks at the plant site now. Entergy wants to construct a second storage pad adjacent to the one that's already in place.

“We still have a need for an additional 45 canisters,” Lynch said. “The existing pad has a capacity of 40, so that's the reason we need the second pad.”

There is general agreement that it's best to move the spent fuel into casks as soon as possible. But concerns have been raised that the location of the storage areas — not far from the reactor building — could negatively affect the cost and timing of decommissioning.

Entergy has responded by defending its plans, saying any attempt to change the second pad's location would take years and cost hundreds of millions of dollars.

Those issues likely will surface again at the Public Service Board's technical hearings this month. The sessions, scheduled to take place in the board's hearing room at 112 State St., will include exhibits, witnesses and opportunities for cross-examination, according to a notice issued by the board.

The hearings will include not only plant owner Entergy and state officials, but also interveners in the proceeding such as the Windham Regional Commission. Chris Campany, the commission's executive director, has been the most prominent voice questioning Entergy's plans and their impact on decommissioning.

“I'll likely be cross-examining Entergy and (Public Service Department) witnesses,” Campany said, adding that it's possible another party could call him to the stand based on his previously filed written testimony.

The Brattleboro-based New England Coalition on Nuclear Pollution also is an intervener in the fuel pad case.

The fuel pad issue has been a thorny one for the Vermont Nuclear Decommissioning Citizens Advisory Panel, which has spent hours trying to come up with a recommendation on the topic. After failing to find consensus in December, the panel considered a revised opinion last week and again couldn't agree.

The stumbling block was one line declaring that the cost of any future relocation of spent fuel “will be borne by the property owner” — meaning Entergy.

Panel member Jim Matteau, who helped craft the opinion, said he's not trying to delay Vermont Yankee's spent fuel project. “It's about public assurance that, if something goes wrong, and if the fuel being where it is is a problem, and if that causes additional costs, then that additional cost … will be borne by the owner and not by the taxpayers and not by the (decommissioning) trust fund,” Matteau said.

Though Entergy administrators have said they do not believe the location of the spent fuel pads will affect Vermont Yankee's decommissioning, they aren't in favor of making any public written guarantees. Paul Paradis, the plant's decommissioning director, also said he believes the proposed advisory opinion language strays into radiological decommissioning — and that's the purview of the federal government, not the state Public Service Board.

After a lengthy discussion, the advisory panel tabled the matter. A working group is scheduled to convene Wednesday to try to craft new language for a fuel pad opinion; the full panel would then consider the language at a Feb. 25 meeting.

“Recognize that I'm going into that hearing with my staff, and I'm going to ask these questions,” Recchia said. “There's going to be a lot of evidence on the record one way or another.”

Thanks for reporting an error with the story, "State sets hearings on Vermont Yankee fuel debate"

Andrew Garland: Keeping a keen eye on the cost of care