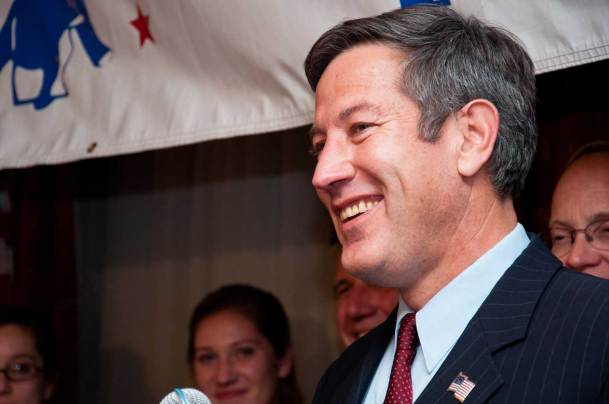 [T]he Federal Aviation Administration, for a second time, gave the go-ahead Monday to a proposed wind farm in Swanton. The FAA found more than a year ago that the project represented no hazard to the flying public. The agency conducted this second study, arriving at the same conclusion, after Swanton Wind developers altered the site’s layout to avoid wetlands.

The federal agency determined that the seven-turbine project would not pose a hazard to air safety, despite coordinated efforts by former Lt. Gov. Brian Dubie and a key state Transportation Agency official who pushed the federal agency to rule otherwise.

Dubie has actively fought Swanton Wind LLC's proposal on behalf of 30 neighbors. Although the developers of the project have not filed a formal application for state approval, Swanton residents have already signaled their opposition in a 731-160 vote.

The one-time Republican gubernatorial candidate lives 1.1 mile from the Swanton Wind site. Dubie, who was a proponent of wind when he held office five years ago, says he now opposes large-scale wind because of associated health risks, environmental harm and noise levels, and because of what he describes as unfair practices of wind power developers.

Dubie, who is a pilot for American Airlines, asked Guy Rouelle, the Agency of Transportation aviation program administrator, to help in making a case that Swanton Wind would pose a risk to air traffic in the vicinity. The wind project would be located 7 miles from the Franklin County State Airport, a small regional airport with a 3,000-foot runway that supports 28 flights a day.

“Any time you put wind turbines on a ridgeline near an airport, I’m going to be concerned,” Dubie said. “I will always advocate for protecting pilots and the public.”

Together, Dubie and Rouelle coordinated efforts and enlisted the aid of aeronautics industry advocacy groups, FAA officials, Vermont’s Army and Air National Guard officers, and subordinates of Rouelle’s in the Agency of Transportation’s Aviation program to fight the project.

Rouelle said he can understand why his advocacy might be viewed to have exceeded the bounds of his position but he said he was motivated solely by air traffic safety. He also said he supports renewable energy.

“In our estimation and evaluation, it would appear that aircraft are going to fly within 800 feet of these turbines, which could put the airplanes in hazardous situations,” Rouelle said. “I’ve been flying for 30 years, and I will always be concerned about wind turbines in close proximity to airplanes. 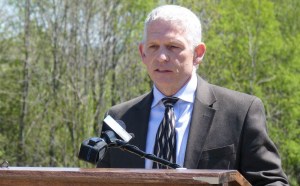 In a series of emails between Dubie and Rouelle, the two discussed tactics and who they might recruit to oppose the project.

Acting in his role as Vermont’s Aviation Administrator, Rouelle asked a manager at one of the state airports to send emails to hundreds of pilots instructing them to write the FAA in opposition to the project.

Rouelle also told Dubie that he wanted to form an independent advocacy group, called the Vermont Airport Managers Association, that would oppose projects like the one in Swanton.

“My thoughts are to found and grow this organization so there is an advocacy group we can call upon when things like Swanton wind turbines pop up,” he wrote to Dubie in an email dated Oct. 17.

Rouelle wants wind turbines to fall under Act 250 land use review criteria instead of Section 248, which does not require a review of the impact on airports. Rouelle told Dubie he’d “planted seeds” with at least one legislator toward that end.

The association could engage legislators in like fashion, Rouelle said, while “tak[ing] the Aeronautics Administrator out of the line of fire.”

Dubie said he’d aid in that effort, and told Rouelle in an email that such an organization would “give you some distance … and cover as a state employee.”

His intention to form a group was motivated purely by a desire for safety, Rouelle said Monday in an interview.

“When folks ask me, ‘Why can’t you do more?’ the fact of the matter is, there are procedures we follow, and then we have to stop and let the process work its way through,” he said. “My job is to make sure the airplanes are safe, and to support the airplanes, and I have limitations to what I can do in my job.”

Rouelle put Dubie in contact with highly placed FAA officials, and coached him on the agency rules Dubie should use in his arguments to the FAA.

But the aviation chief, who apparently went to great lengths to help Dubie understand the FAA process, neglected to tell Dubie when he found out that the FAA had, in fact, not determined the turbines could be a safety hazard.

Instead, Dubie sent a press release out to Vermont media outlets on Nov. 21, saying that the FAA had already made a determination that the turbines posed a hazard. “FAA states Swanton Industrial Wind would be a Hazard to Air Navigation,” reads the subject line to Dubie’s press release.

“Safety is paramount,” Dubie wrote in the press release, quoting himself in his capacity as chair of the Vermont Aerospace and Aviation Association. “The proposed industrial turbines would interfere with the FAA radar and would be a hazard to air navigation."

But just days before, an FAA administrator had told Rouelle that the federal agency had not yet made a determination about whether Swanton Wind posed a hazard to air traffic. The FAA ultimately ruled Monday that the proposed wind farm would not pose a danger to airplanes.

Dubie's erroneous conclusion in the press release was drawn from a FAA notice of "presumed hazard" that was issued Nov. 16. That notice simply said the federal agency needed to study the matter. Dubie misunderstood the notice and as a result made inaccurate public statements.

Rouelle also misinterpreted the notice in the same way and praised Dubie for playing a critical role in what he thought was the FAA’s ultimate decision to block the project.

“Great job, Brian,” he wrote in an email to Dubie Nov. 16. “You were very instrumental in making this happen.” 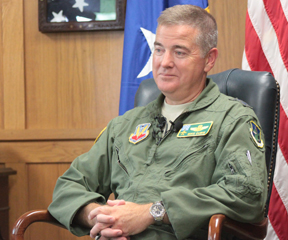 But two days later, Rouelle saw that the wind project was still under evaluation by the FAA, and he emailed FAA Airspace Specialist Cindy Whitten, asking why the federal agency continued to study the turbines after Rouelle thought they’d been found to constitute a hazard.

The project had never been determined a hazard, Whitten said. The turbines had only been studied as “potential hazards.”

The turbines “are not [identified as] hazards at this point in the study process,” Whitten told Rouelle in an email dated Nov. 18.

Vermont Adjutant General Steven A. Cray, who oversees Vermont’s Air National Guard, made the same mistake as Dubie and Rouelle. Cray wrote a letter dated Nov. 17 to the FAA stating that the agency had determined the turbines to be a hazard, and for that reason, he declared that he opposed the project.

Dubie, apparently with Cray’s permission, forwarded the adjutant general's letter to Whitten as evidence of others’ concern over the project’s threat to the public.

Dubie also forwarded Whitten a letter from Vermont’s previous adjutant general, Brian Dubie’s brother Michael Dubie, who also opposed the project on grounds that it represented a hazard to the flying public. Included were identical letters from his three other brothers, all written under their titles as officers in Vermont’s National Guard branches, and all arguing the project posed a danger to airplane passengers, including the possibility of a crash.

Sean Collins, eastern regional manager of the Aircraft Owners & Pilots Association, told Dubie in an email that pressure from his group could result in an FAA issuance of a Notice of Presumed Hazard. The pilots’ association representative also told Dubie that the notice by itself could be used as leverage to get developers to reduce the size of wind farm or abandon the site altogether.

In response to a legislator, who was seeking arguments in order to fight another wind project, Rouelle reiterated he was not opposed to all wind projects.

“My team supports alternative energy when it does not impact the functionality of our airport and airspace system, a system that operates efficiently and safely,” he said.

A spokesman for Swanton Wind said the FAA’s determination of no hazard came as no surprise, and he accused the former occupant of Vermont’s second-highest public office of perhaps attempting to sow misinformation.

“This FAA issue is just one in a growing list of examples where Brian Dubie has presented information about the project in a misleading fashion, either because he misunderstands it … or because he has an agenda against it at all costs, but for whatever reason, this is another instance where he’s gotten the facts wrong,” said Anthony Iarrapino, Swanton Wind spokesman.

Thanks for reporting an error with the story, "Dubie's behind-the-scenes Swanton Wind fight fails to fly"

Photo Gallery: A River of Light spreads in Waterbury