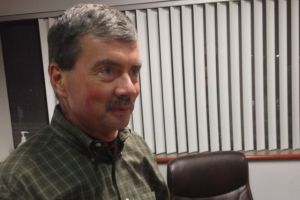 [V]ERNON – Rod McCullum has what you might call conflicting feelings about storage of spent nuclear fuel at Vermont Yankee.

“The fuel will be safe here,” said McCullum, a senior director at the Nuclear Energy Institute. “The fuel shouldn’t stay here.”

While McCullum has full confidence in the safety of Vermont Yankee’s planned dry cask storage system for the radioactive material, he laments the lack of a long-term federal plan for moving that waste out of Vernon.

Asked what he thought about the current projection that all nuclear waste will be off the Vermont Yankee property by 2052, McCullum offered a qualified endorsement.

“2052 is certainly doable,” he said. “But the government has to move in some direction.”

The need to move Yankee’s fuel may be one of the few points on which McCullum and longtime critics of the plant would agree. While regional groups like the New England Coalition and the Citizens Awareness Network have raised safety and environmental concerns about Vermont Yankee both before and after the Vernon plant shudown in December 2014, the Washington, D.C.-based Nuclear Energy Institute is a national trade group and lobbying organization that prioritizes promoting the “beneficial uses of nuclear energy.”

Vermont Yankee’s reactor is permanently defueled, and it is headed into a period of extended dormancy called SAFSTOR. So while there’s not much nuclear activity left here to “promote,” the NEI this week paid a visit to get a better handle on issues faced by operators of decommissioning plants.

One of those issues is the longterm storage of spent nuclear fuel and the federal government’s lack of progress toward building a national repository for such material. McCullum’s specialty is what he calls “used fuel,” and he said Entergy’s plans for Vermont Yankee fuel storage – there will be 58 dry casks on site eventually – is “consistent with what they are doing at every other plant.”

Entergy expects to have all of its spent fuel moved out of a pool and into dry casks by the end of 2020 and has announced plans to start moving that material two years sooner than expected.

McCullum said more than 2,000 dry cask systems have been loaded in the U.S., and “it’s really what I consider one of the great industrial success stories of our time. We did not envision dry cask storage when we built any of these plants.”

“Dry cask storage is proven, and it works,” he added. “We’re even extending licenses now, unfortunately.”

He says “unfortunately” because license extensions signal the continued problem of long-term storage of spent fuel at the nuclear plant sites, in some cases, long after the plants have been dismantled.

The U.S. Department of Energy is working toward interim storage facilities for nuclear waste, but development of a permanent “geologic” facility has stalled. It’s a concern both for plant owners and for citizen groups; last month, groups from Vermont, Maine, Massachusetts and Connecticut joined forces to send a letter to Congress seeking federal fuel-storage solutions.

“The government’s at a complete stalemate,” McCullum said. “Which is why dry cask storage has become so important, which is why we’re extending the licenses of these things.”

The need for permanent storage is one argument against nuclear power. The NEI sees it differently, promoting the lack of carbon dioxide emissions from nuclear plants and the availability of a solution for storage.

“We do know what to do with (nuclear) waste products. We put them in deep geologic disposal,” McCullum said. “In areas where the politics permit, there is absolutely a solution.”

Of course, fuel storage is just one part of Vermont Yankee decommissioning, a project that could take up to 60 years under the SAFSTOR program. That long time frame has attracted the ire of U.S. Rep. Peter Welch, D-Vt., who in September grilled Nuclear Regulatory Commission Chairman Stephen Burns about the “huge price the community pays” for extended cleanup.

Burns told the congressman that the NRC believes SAFSTOR is a “safe and legitimate” method for decommissioning. And McCullum agrees, both for financial and technical reasons.

On the money side of the ledger, “when plants shut down early, there will be cases when flexibility is needed to let the decommissioning funds accumulate.” That’s the case at Vermont Yankee, which did shut down earlier than had been expected: Decommissioning carries an estimated $1.24 billion price tag, and the plant’s decommissioning trust fund stood at $610 million at last report.

From a technical standpoint, McCullum said the delay allows radioactivity to break down over the course of decades. “There’s a lot less radiological risk if you tear it apart 50 years from now, as opposed to tearing it apart now,” he said.

The decision to undertake immediate decommissioning or to enter SAFSTOR “involves a lot of parameters,” McCullum said. “Our view is that every (plant operator) needs the flexibility to make that decision.”

Lately, those decisions are happening more often due to several plant closures. For example, along with shutting Vermont Yankee a year ago, Entergy has announced its intention to close FitzPatrick Nuclear in Scriba, N.Y., in late 2016 or early 2017 and to shut down Pilgrim Nuclear in Plymouth, Massachusetts, by 2019.

McCullum said the NEI wants to make the decommissioning process more streamlined and less expensive by lobbying for clearer decommissioning regulations during the NRC’s current rule-making process, which has just begun.

But the NEI also wants to prevent more nuclear shutdowns due to economics and competition from natural gas, factors cited in each of the Entergy closures. “Those are all in markets that are deregulated, where the electricity prices are driven largely by the price of natural gas and production tax credits for renewables,” McCullum said.

He believes nuclear power – due to its production capacity and reliability, among other factors – ought to occupy a more prominent place in the nation’s power production mix.

“There are efforts afoot to get the markets to recognize the value of nuclear,” McCullum said. “We would say that not all electricity is the same. You pay more for a filet than a hamburger, even though they come from the same cow.”

Thanks for reporting an error with the story, "Industry group: Government must move Vermont Yankee fuel"