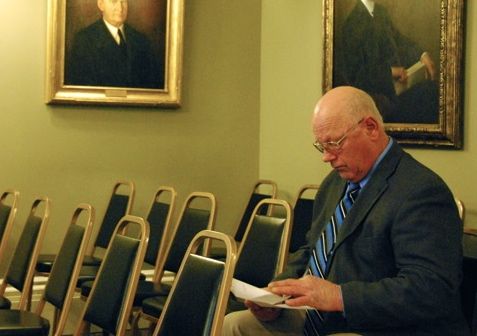 [S]en. Norm McAllister, who faces a Senate vote to suspend him from serving in the Legislature, says if his colleagues follow through, the action will be unconstitutional because it will deprive Franklin County residents of full representation.

At a Senate Rules Committee hearing Wednesday regarding his suspension, McAllister said his constituents want him to remain in office, adding some have promised to file a lawsuit if a suspension is leveled. He again spoke of a lawsuit in an interview Thursday, but did not name any possible plaintiffs.

The Rules Committee voted 3-2 in favor of a suspension resolution. The full Senate is expected to take up the measure shortly after lawmakers return in January.

“I have had constituents that said they might be interested in filing,” he said. “But that’s going to cost money and that will be the drawback.”

But while McAllister claims constituents are considering legal action, a number of Franklin County representatives said they have heard no rumblings of a lawsuit in their frequent talks with party members and voters.

“Nobody has expressed a plan or a desire to take legal action,” said Rep. Carolyn Branagan, a Republican who represents Franklin’s first district. “I think it’s exactly the opposite, the people with whom I know and have spoken to want this over.”

Branagan said the Franklin County Republican Party is not planning to sue, but acknowledged voters are nervous about the impact of a McAllister suspension on constituents.

Luke Martland, chief legal counsel for the Legislature, said Wednesday there might be grounds for legal action if McAllister is suspended, noting the state constitution guarantees equal representation in the Senate for all counties.

“It is arguable that there is a constitutional issue raised here, because those constituents will not have equal representation,” he said.

If suspended, McAllister would still be paid, but could not vote or work as a legislator, according to Senate Secretary John Bloomer.

Franklin Rep. Corey Parent expressed cautious optimism that McAllister would resign before the session begins so that Franklin County could ensure two voting members in the Senate. He said he hadn’t heard anything about a lawsuit until Wednesday’s remarks by McAllister.

“The feeling I’ve gotten from folks is that they had wished he resigned before now, so that there could be a replacement for him,” Parent said.

Franklin Republican Reps. Albert Pearce and Larry Fiske, Independent Barbara Murphy and Democrat Kathleen Keenan also said they hadn’t heard anything about a lawsuit until McAllister’s remarks Wednesday. Nor had Claude Cheralier, the Highgate chair for the Franklin County Republicans.

McAllister was arrested on Statehouse grounds on the next to last day of the legislative session. The senator pleaded not guilty. After he refused, despite pleas from his colleagues, to resign from the Senate last May, he was stripped of his committee assignments.

The senator is charged with multiple felonies for allegations that he rented a trailer on his property to a tenant in exchange for sex and repeatedly raped a woman who served as his intern at the Statehouse last year.

When asked if he would challenge the constitutionality of the suspension if a constituent did not, McAllister said the costs associated with his criminal trial have left him with little money for an additional lawsuit.

“I don’t think I can even afford to hire another lawyer,” McAllister said.

“I don’t even have enough money to have these people evicted off my property,” he added, referring to his alleged victims who live in a trailer on his land. “They are still there.”

McAllister acknowledged he did not know how a legal challenge to suspension would play out, or if it was even possible.

“Three people decided that they are going to be my judge and jury,” he said, in reference to the senators who voted for his suspension at the hearing Wednesday. “So I don’t know what options that leaves me.”

“We are going to check it out,” he added.

Thanks for reporting an error with the story, "Franklin County lawmakers question McAllister lawsuit claim"