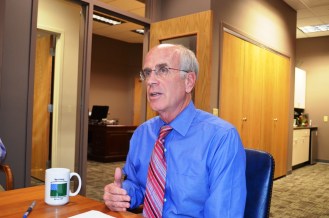 BRATTLEBORO – The creation of new federal regulations for cleaning up nuclear power plants is supposed to address a common complaint: that the decommissioning process doesn't allow for meaningful public participation.

But even as the Nuclear Regulatory Commission gets started on drafting those rules, there is new controversy regarding the rule-making process itself.

Six federal lawmakers, including all three members of Vermont's congressional delegation, have signed a letter demanding that the NRC extend its public comment period and hold more public meetings.

The senators and members of congress say there should be more opportunities for the public to weigh in as the NRC begins what will be a high-stakes, multi-year regulatory process.

“We strongly believe that public meetings should be held in or near nuclear plants' host communities and should provide attendees with ample opportunities to ask questions and understand the meaning and scope of the proposed rule-making,” the letter says.

The letter was sent to NRC Chairman Stephen Burns and is signed by Sens. Bernie Sanders, I-Vt., and Patrick Leahy, D-Vt., along with Rep. Peter Welch, D-Vt. Welch recently has questioned the NRC, both in person and via letter, about Vermont Yankee decommissioning.

The other signatories are Sen. Edward Markey, D-Mass.; Sen. Elizabeth Warren, D-Mass.; and Rep. William Keating, D-Mass. In October, Entergy announced that its Pilgrim Nuclear Power Station in Plymouth, Mass., will close no later than 2019.

The issue has emerged in Vermont as Entergy, after shutting down the reactor at its Vermont Yankee plant, pursued a variety of regulatory exemptions and license amendments for the site. State, regional and local officials have complained that the decommissioning process is so complex – and so geared toward federal oversight – that it effectively shuts them out.

Entergy has maintained that it is compliant with all NRC regulations and that the current federal decommissioning rules have been “proven to work.”

Nevertheless, the company has acknowledged the need for change. Vermont Yankee spokesman Marty Cohn recently said the decommissioning process “could be improved,” noting that some NRC regulations don't differentiate between operating and non-operating reactors.

The NRC is taking a broad look at decommissioning regulations, with an eye toward making them “more efficient, open and reliable.” Topics will include emergency preparedness, physical security, trust-fund spending and public participation – all of which have been issues raised in regards to Vermont Yankee.

The rule-making process, which will extend through 2019 and possibly beyond, kicks off with a public comment period that began in late November and ends Jan. 4. There also is a public meeting scheduled for Wednesday, Dec. 9, at NRC headquarters in Rockville, Md.

In a letter dated Dec. 7, the six federal lawmakers deemed those arrangements inadequate.

“While we commend the NRC for proposing these long overdue regulations, we believe the short public comment period and the plan to have a single public meeting will not give local and state stakeholders sufficient opportunities to participate meaningfully in the rule-making process,” the document says.

The letter urges more public meetings at the start of the NRC's rule-making work, with legislators asking for sessions “in each of the states in which a nuclear power plant is currently being decommissioned or will be decommissioned in the next four years.”

Additionally, the lawmakers are asking that the NRC extend its public comment period by a month, to Feb. 4.

Furthermore, until the new rules are ready, the lawmakers are asking that the NRC stick to its current regulations “instead of approving routine exemptions from existing safety, emergency response, security and financial surety requirements.”

In reaction to the letter, NRC spokesman Neil Sheehan on Tuesday said the yearslong, rule-making effort will allow for other public comment periods and meetings along the way.

“The public meeting (on Dec. 9) is just a starting point,” Sheehan said. “It will allow the staff to discuss the areas to be reviewed and the public to comment on those. There will many opportunities for public input as the new regulations are being developed.”

Thanks for reporting an error with the story, "Vt. congressional delegation: Public needs more say in nuke rules"