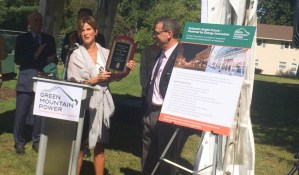 Rutland Mayor Christopher Louras accepts a declaration of his city as the Solar Capital of New England from Mary Powell, president and CEO of Green Mountain Power, in September. File photo by Erin Mansfield/VTDigger

[T]he state’s largest utility expects to soon reach the limit on how much net-metered power it has to buy from Vermonters who build their own renewable energy projects.

Green Mountain Power serves the majority of Vermont households, and reaching the cap means it no longer has to buy any renewable energy, including solar power, from them or do so at an increased rate. Carlson said the company would file documents with state regulators on Friday to propose to extend net metering for households anyway.

Reaching the net-metering cap is directly related to bill-credit incentives the state Legislature passed years ago and the looming expiration of the 30 percent Business Investment Tax Credit at the end of 2016 from the federal government, which has helped solar projects across Vermont go up exponentially in number and size.

Net-metering is a program the Legislature established that requires utilities to buy back all power produced by certain renewable projects and do so at an increased rate. For solar in particular, Green Mountain Power must pay 20 cents per kilowatt hour for projects smaller than 15 kilowatts, such as a roof-mounted array, and 19 cents per kilowatt hour for energy for projects between 15 kilowatts and 500 kilowatts.

Instead of paying cash for the power, utilities must give enhanced bill credits for that amount to the project owner, who is often a homeowner or a large institution that has entered into an agreement with a developer. As part of the program, the Legislature sets a cap so that utilities only have to give these bill credits for a certain portion of their peak load.

In 1998, that cap was 1 percent of a utility’s peak load. Over time it went to 2 percent, then 4 percent. In 2014, the Legislature raised the net-metering cap to 15 percent and didn’t expect utilities to hit that number until the end of 2016.

“This is a tremendous success that people should be celebrating,” Carlson said. “This (net-metering program) has done exactly what leaders wanted it to do, so now what this is about is assuring that we get the right amount of solar and value for customers.”

Going forward, Carlson said the company wants to encourage net-metered residential solar under 15 kilowatts on rooftops and adjacent to homes. (The average roof-mounted array is about 6 kilowatts.)

At least two other utilities also reached the cap

The Vermont Electric Co-op announced Monday it hit its cap in May. The utility says it will allow some small residential projects to join the net-metering program through the end of November. Other large and small solar projects can only participate in net metering if space frees up in the utility’s queue.

Solar development already pushed the Hardwick Electric Department over its net metering cap in July, prompting the utility to stop accepting energy for the time being. The utility had about 1 megawatt, equal to 1,000 kilowatts, in its territory at the time, plus a handful of wind and methane projects.

Several other small utilities are approaching their net-metering caps: The Village of Jacksonville Electric Co. was at 14.6 percent on Friday, according to data from the Public Service Department, and the Village of Hyde Park Electric Department was at 13.3 percent.

“These sudden shutoffs that we’re seeing from Vermont Electric Co-op and Hardwick Electric — it’s troubling because it’s just not sustainable,” said Emily McManamy, the spokesperson for SunCommon. “This industry has grown so much in the past few years because of the demand from Vermonters.”

McManamy said the reduction in net metering availability would “change the solar landscape.” She said SunCommon would support it if the Legislature raised the net metering cap above 15 percent.

“For instance, right now, there’s never been a better time to go solar because of the availability of net metering, and the ability to lock in on energy prices, and the federal tax incentive,” McManamy said. “But these changes, these kind of hard stops, make it difficult for Vermonters to plan their own energy futures.”

Thanks for reporting an error with the story, "Green Mountain Power poised to top net metering cap"