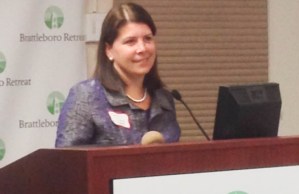 Betsy Bishop, president of the Vermont Chamber of Commerce. Photo by Mike Faher/VTDigger

But the chamber's president also has a relatively new tool, and it's got no pictures or brightly colored graphs. Instead, it's a dense, still-expanding document running to nearly three pages and featuring more than 50 bullet points detailing taxes, fees and mandates that have been imposed recently on Vermont residents and businesses – as well as those that could be considered in 2016.

Dubbed the “total impact list,” it's designed to ensure that state lawmakers look backward even as they seek new ways to address future budget deficits. In the next legislative session, Bishop expects to use the strategy to combat proposals such as an expanded sales tax, a carbon tax and mandatory sick time.

“It's not just about the issue that you're addressing today,” Bishop said. “We're looking at the cumulative impact over the past five years of the amount of taxes, fees and mandates that have been loaded onto businesses. That's starting to really hurt. Give us some time to absorb what you just did.”

Bishop's remarks came Wednesday morning at a breakfast sponsored by Brattleboro Area Chamber of Commerce. Several Windham County lawmakers were in attendance, and she made sure to thank those who had worked during the 2015 session to pass a bill that includes an additional $200,000 for marketing aimed at tourism and economic development.

“It was a paltry sum that was ultimately approved, but I'm thrilled with that paltry sum, because it was a start,” Bishop said.

She also lauded several legislative changes from 2015 including elimination of the cloud tax; updated regulations for limited liability corporations; and expanded eligibility for the Vermont Employment Growth Incentive program.

And Bishop took time to praise the budget-cutting work that she witnessed during the past session. “It's really tough to do,” she said. “There's nothing in our state budget that's easy to cut. There's not fat there. There's real need there.”

Nevertheless, Bishop's main theme was clear. She recounted recent headlines about state budget gaps, including last week's news that the state's Medicaid program is far over budget both for the current year and, according to current projections, for fiscal 2017.

“This is about the fifth year in a row that we've seen (a budget) gap,” Bishop said. “That's not a temporary problem. That is a structural deficit problem, where the state has continued to think about how we can spend more when our revenues are lagging.”

Increased state spending, she argued, is taking a toll on Vermont's businesses – both large and small. Bishop produced a pie chart detailing more than $52 million in new taxes, fees and mandates approved by the Legislature in 2015. The biggest chunks are $22.9 million in income tax changes, $7.9 million from a new soft-drink tax and $7.5 million in fees to support expanded clean water efforts.

“In addition to that, my guess is, we will be looking for new revenues for water cleanup in the coming years,” Bishop said.

Looking ahead to the next legislative session, Bishop detailed the Chamber's policy concerns including:

Bishop said the Senate Finance Committee last spring debated the expansion of the sales tax as a way of broadening the base and potentially lowering the rate. But lawmakers couldn't come up with a way to make it work, and Bishop was no fan of those proposals.

“Just so no good idea goes to waste, the Senate Finance Committee instructed the Tax Department to go away over the summer and fall and come up with a better strategy so they can do this next year,” Bishop said. “Will it happen? I'm not sure. Will it be talked about at length? Yes, it will.”

• Increasing the rooms and meals tax, possibly to pay for water cleanup. The Chamber opposes any such increase.

Rooms and meals is “a favorite tax to talk about every year,” Bishop said. “We have been successful in the last three years in defeating that idea, and we will work hard to push that back (in 2016) as well.”

• Instituting a carbon tax. Such a levy would be intended to cut reliance on fossil fuels, but the Vermont Chamber of Commerce believes it would put Vermont manufacturers at a “competitive disadvantage.”

While Bishop said legislators from all party affiliations support making a change on that front, she isn't optimistic. “Right now, we have no clear path, and we haven't for years,” she said. “We will continue to work on that.”

• Allocating more money for tourism and economic marketing. “We got that started,” Bishop said. “We intend to bring that back (for additional funding).”

An important element of the marketing initiative, she said, is to send a message to those who have left Vermont and are looking for a way to return. “We need to reach that population and get them to think about Vermont as a great place to be,” Bishop said.

That was seconded by Steve Gordon, president and chief executive officer of Brattleboro Memorial Hospital.

“I'm very concerned about Medicaid, because the easy thing to do … is going in and just slashing reimbursement rates for providers,” Gordon said. “The problem with that is, it exacerbates the cost shift, going back to all the businesses that pay into health insurance. Their rates are increased, and you get into this vicious cycle.”

“The state's got to look at how Medicaid is administered in this state, starting in Montpelier and the departments that are involved in the Medicaid budget,” Gordon added.

• Mandating paid sick days for most Vermont workers. That initiative passed the House in April but has not yet been approved by the Senate, and Bishop said it is unpopular among Chamber members.

“We did not support it when it came through the House,” Bishop said. “We're very concerned about the impact – another mandate on businesses when they're already trying to absorb new taxes and regulations.”

Among those attending Wednesday's meeting was state Rep. Tristan Toleno, a Brattleboro Democrat who has been a prominent supporter of the sick day bill, H.187. Toleno, who is himself a small businessman, defended the bill as modest – for example, it does not apply to temporary or seasonal workers – and incremental. Employees must earn their sick time, and employers can impose a waiting period during which new hires cannot use their time off.

“They will earn it by proving long-term value to their business,” Toleno said. “When businesses start to look under the hood, they're going to see that this is a very reasonable bill.”

Thanks for reporting an error with the story, "Vermont Chamber warns cumulative tax impacts are hurting businesses"