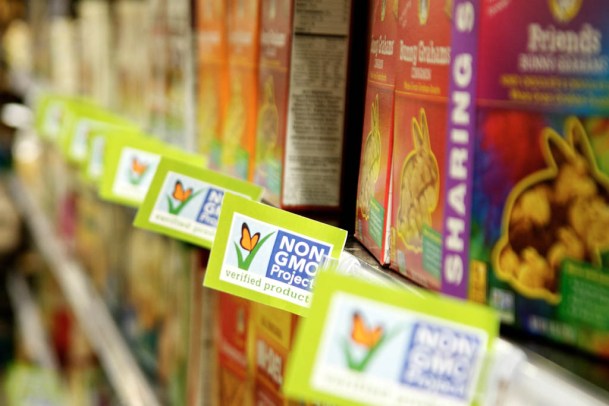 Some products contain a voluntary label indicating they were produced without GMOs. Photo by John Herrick/VTDigger

Attorneys general in Connecticut, Maine, Maryland, Massachusetts, Hawaii, Illinois, New Hampshire and Washington filed a friend-of-the-court brief this week in the U.S. Court of Appeals for the Second Circuit in New York City.

Laura Murphy, associate director of the Environmental and Natural Resources Law Clinic, said in a statement that Vermont Law School was "honored" to file the brief on behalf of the four environmental groups that were "so instrumental" in passing the 2014 law."

"The legislative process for this law was very thorough and thoughtful, and there are many reasons why this law is different from Vermont’s rBST labeling law,” Murphy said. “We look forward to seeing this case through."

By fall the Second Circuit is expected to hear oral arguments, and the court is on track to make a decision by the end of 2015. Depending on what’s decided, that could push the case back down to U.S. District Court in Vermont for a trial, according to Attorney General Bill Sorrell.

"We’re pleased to have the help of businesses, of states, and the various other organizations favoring food safety and consumer rights," Sorrell said. "Basically, it’s a First Amendment case, freedom of speech."

Sorrell compares the lawsuit to a historic case that required meat packers to show the country of origin. “It’s a straightforward, non-editorialized (labeling),” he said. “It’s not like tobacco products that say ‘hazardous to your health’ or whatever."

Most recently, in June, the Grocery Manufacturers Association wrote to Gov. Peter Shumlin to say that its members could end up paying $10 million per day in fines. The group said that was too much money considering that Vermont is the second-smallest state in the country.

Shumlin issued a snarky response: “Here’s an idea for the industry: Just label your products. All of them, nationwide. Sixty-four countries already do it. I’m sure the food industry in America could summon the moral imagination to be the 65th.”

Sorrell said the state or the food groups might end up asking the U.S. Supreme Court to review the issue. “I guess I’ll be surprised if the Second Circuit decision is the end of the case,” he said.

Thanks for reporting an error with the story, "Eight states, environmental groups back Vermont in GMO labeling lawsu..."