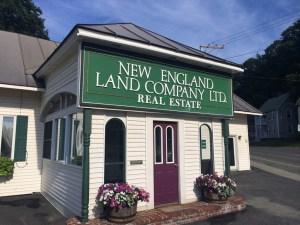 [R]ANDOLPH CENTER -- A plan for a large development off I-89 in Randolph drew stiff criticism in a preliminary environmental review hearing Friday.

Jesse “Sam” Sammis wants to build a 1.15-million-square-foot, 173-acre project on farmland just off the Exit 4 ramp of Interstate 89. The Green Mountain Center project would include a visitors center, a store for showcasing Vermont products, a hotel and more than a dozen single-family homes and buildings for light industrial companies.

Critics of Green Mountain Center complain that Jesse “Sam” Sammis did not come to an environmental hearing on Friday with enough information to prove that the project would meet two key criteria under Act 250, the state’s land use development law. The hearing took place before the District 3 Environmental Commission, which reviews projects under the auspices of the state’s Natural Resources Board.

Sammis owns the Three Stallion Inn and the New England Land Co. in Randolph. He and his wife, Jinny, bought the 1,300-acre Green Mountain Stock Farm in 1971, built a housing development, subdivided the land into 100 lots, and have sold 45 of them as of May, according to written comments he sent VTDigger this week.

Several years ago, according to Sammis, the couple turned the former Central Vermont Railroad Station into the Randolph Depot restaurant, renovated three buildings in downtown Randolph and bought and improved the Montague Golf Club. Many of the projects were aimed at “maintaining the character and vitality of downtown Randolph,” he said in written comments.

Now his most ambitious development proposal is under scrutiny from environmental groups who say the farmland next to the Exit 4 ramp is too valuable to be built upon. Primary agricultural soil is extremely valuable for growing crops, environmentalists say, and is irreplaceable.

The commissioners pressed Sammis on the details of the land plan and its effects on farmers. The Conservation Law Foundation and the Vermont Natural Resources Council argued that the project as designed would not meet two Act 250 criteria that relate to soil, and a requirement that any proposed development fit in with Randolph’s town and regional plans (9B and 10, respectively).

“It’s not an innovative site design,” said Brian Shupe, executive director of the Vermont Natural Resources Council. “They’re not doing everything they can to mitigate the effect on agricultural land holdings.

“The landowner owns significant land holdings in town that are suitable for many of the uses that are being proposed,” Shupe said.

Under the current site design, developers would build a set of single-family homes on the north side of Vermont 66 — farther north than the McDonald’s just off the exit ramp — in a design that resembles cul de sacs. There would also be light industrial office buildings built on the north side.

To the south, developers working for Sammis want to leave plenty of green space open in what is currently a driving range for golfers across the street from the McDonald’s. They would build the visitors center adjacent to Vermont 66; the 180-room hotel and conference center would be further south.

Across the property, plans envision fenced-in areas for animals to graze and a recreational trail running around the property, according to plans submitted to the commission. There is also a brook running through the property. 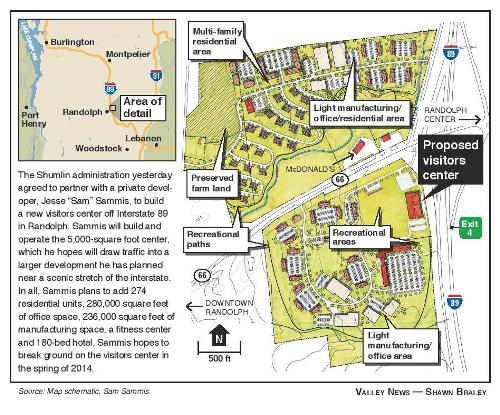 The approval process is still preliminary, and the District 3 commission is evaluating the project against only two criteria: 9B, which concerns primary agricultural land use, and 10, whether the development conforms with local and regional plans.

Sammis also wants the state to let him use a special “off-site mitigation” process that would allow him to pay a fee to the state to conserve land elsewhere in exchange for developing Exit 4.

“Before you can ask for this mitigation, you’re going to have to do a reasonable job at clustering the site,” said Tim Taylor, chair of the commission. “I want to understand better why you can’t shift this around some more.”

Taylor said he is a farmer who is concerned about “compact design.” He consistently pressed Sammis on how he could make the project more consistent to Randolph's agricultural character.

John Benson, an engineer working on the proposal from DuBois and King, said the developers were trying to leave space between a brook on the property and maintain open space.

“Another thing we were trying to do is create a buffer between what is commercial industrial property and what is [agricultural land],” Benson said.

The Conservation Law Foundation brought in two local farmers, including one who works for the Vermont Creamery in Randolph as a goat farmer. The organization also questioned representatives from the Vermont Natural Resources Council as witnesses.

“If you’ve got some creative ideas for this master plan, I’m all ears,” Sammis said. He and his lawyers from Downs Rachlin Martin were unable to be reached for comment Friday evening, but they also said during the hearing that they were open to the commission’s ideas.

Sandy Levine, a senior attorney for the Conservation Law Foundation, was not convinced. She said Sammis “has not made efforts to address the clear requirements of Act 250.”

“The project will pave over more than half of the very valuable farmland that is at the project site,” Levine said. “This project is just terrible for Randolph, and it’s terrible for farming, and the applicant has made no effort to address the concerns that the commission has raised.”

The commission will hold more hearings on the proposed Green Mountain Center.

Thanks for reporting an error with the story, "Environmental groups challenge Exit 4 development plan"