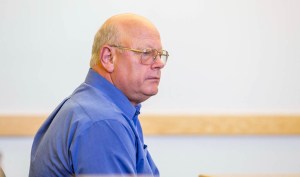 Defense attorneys and prosecutors in the sex assault case against Sen. Norm McAllister, R-Franklin, have agreed to a schedule that could result in a March trial — smack in the middle of the 2016 legislative session.

However, legal experts say that in a case like McAllister’s with multiple felony sexual assault charges, motions are likely to delay a trial beyond a normal adjournment date for a legislative session.

That would make it possible for the Franklin County Republican to serve out his term, assuming his Senate colleagues don’t act to remove him, which Senate Pro-Tem John Campbell, D-Windsor, has indicated they will.

McAllister, a 63-year-old dairy farmer, was arrested outside the Statehouse in May and arraigned on three charges of sexual assault and three charges of prohibited acts. The probable cause affidavit alleges McAllister coerced two women to have sex with him in exchange for work and shelter. He pleaded not guilty to a total of six charges, three felonies and three misdemeanors.

McAllister said Tuesday he would like to complete his sixth term in the Legislature.

“If it was at all possible I’d like to, but we need to get this stuff resolved,” he said. At this point any further statement would be speculative, he added.

“I’ve got to wait and hear from my lawyers before I can make any kind of a decision,” he said. McAllister was not aware that a pretrial schedule had been agreed to by his attorney and the state. His attorney, Brooks McArthur, could not be reached for comment.

McAllister reiterated that he has no intention of resigning his seat in the near future.

The discovery and pretrial schedule were set July 7, according to a Franklin County Superior Court clerk. The witness list is due Aug. 15; defense and state depositions are to be filed Jan. 4; motions and notices are due Oct. 1; and the pretrial hearing and jury drawing are set for Feb. 16.

David Cahill, executive director of the Department of State’s Attorneys and Sheriffs, estimated that the average time to go from arraignment to jury trial for a sexual assault case in Vermont is 12 months. Defender General Matt Valerio estimated the average to be longer, likely 18 months to two years.

Both agreed that the window from pretrial and jury selection proceedings happen much more quickly for defendants who are held in custody. McAllister was released on bail following his arraignment.

The time from his Feb. 16 pretrial hearing to the start of a trial could be anywhere from an hour to several weeks. Defendants have the right to a “pick-and-go trial,” meaning the trial begins immediately after a jury is drawn. Cahill said that right is frequently waived.

It’s still possible the two sides will reach a plea deal, which Cahill said is how the majority of felony cases in Vermont are resolved.

The trial could also be delayed significantly if the prosecution or defense file motions. Valerio said he expects there will be motions filed in McAllister’s case. The odds are good that McAllister won’t go on trial before the likely adjournment of the 2016 legislative session, he said.

“Every case has a life of its own, but I would guess it takes longer than that,” Valerio said.

Cahill agreed that motions are likely in a case like McAllister’s. In such cases, a protracted process tends to favor the defendant, providing motivation to file motions that will delay a trial.

Thanks for reporting an error with the story, "McAllister sexual assault trial could coincide with 2016 session"

Reese Kelly: Consider my perspective when voting for school leadership

Michael Long: A mayor for this moment, principled and more than capable too