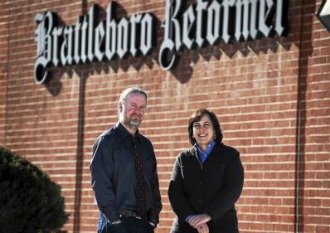 New England Newspapers Inc., has laid off 10 editorial employees in Vermont and Massachusetts.

No formal announcement has been made by the newspaper chain, which includes the Brattleboro Reformer, the Bennington Banner, the Manchester Journal and the Berkshire Eagle in Pittsfield, Massachusetts.

The company laid off three newsroom staffers at the Reformer. Tom D’Errico, the manager of content marketing, Mike Faher, senior reporter, and Pat Smith, the newsroom clerk, were given notice on Friday. On June 12, Michelle Karas, the managing editor of the Reformer and the Banner left earlier to take a job at The Colorado Springs Gazette. The Banner laid off newly hired reporter Jacob Colone, and the Journal let go of Brandon Canevari.

That leaves skeleton crews at all three newspapers. Andrew McKeever, the editor of the Journal, has no reporter on staff. There will be just two reporters at the Reformer, Dominic Poli and Howard Weiss-Tisman, as reporter Chris Mays has been dispatched to the Banner where he will work with Keith Whitcomb and Derek Carson.

Kevin Moran, the regional vice president of the New England Newspapers, was not immediately available for comment.

The Reformer building is listed for sale.

Apollo Global Management, a hedge fund, was poised to purchase the company in the spring, but backed out. Not long after, John Paton, the CEO of DFM, stepped down, according to Jim Romensko, a newspaper industry reporter. In recent weeks, Digital First sold off properties in New Mexico and Texas to Gannett, according to the Poynter Institute blog.

On Friday, The Saratogian and the Troy Reporter in New York announced layoffs and voluntary buyouts for 11 editorial staffers.

Thanks for reporting an error with the story, "Brattleboro Reformer, Bennington Banner, Manchester Journal lay off e..."