[T]he state has been investigating issues with the services and practices of Rutland Mental Health Services going back to at least November 2013, records obtained by VTDigger show.

RMHS is the designated service agency in Rutland County, one of 11 nonprofits the state contracts with to provide mental health, disability or substance abuse services in regions across the state. The agency operates under the umbrella of the Community Care Network, and through its various programs serves 3,000 people in Rutland County and employs 325 full-time equivalents. 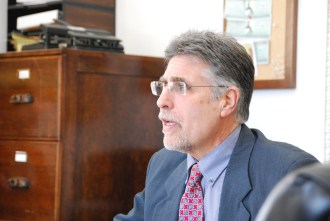 Secretary of of the Vermont Agency of Human Services Hal Cohen. Photo by Elizabeth Hewitt/VTDigger

Hal Cohen, secretary of the Agency of Human Services, said two state departments have been looking into care quality and clinical issues “for more than a year.”

In December, then acting AHS Secretary Harry Chen wrote a strongly worded letter to former Board Chair Robert Bliss stating that Rutland Mental Health Services was “out of compliance” with the terms of its master grant agreement with the state.

The letter says the state would not approve a new master grant agreement and intended to “delay” the concurrent designation process — a regulatory review social service nonprofits must go through every four years to maintain status as the designated service agency in their region. The designation process for RMHS has resumed, according to state officials.

But Rutland Mental Health Services still does not have a new grant contract with the state, according to Cohen. A provisional extension of its current contract is in place to keep the money flowing through June 30.

The December letter cites nearly 50 ways in which RMHS is said to be out of compliance in its agreements with DMH and DAIL, though some are redundant. The most serious is that safe staffing protocols were not followed “leading to near-death suicide attempt.”

Investigators from DAIL, following up on a complaint, discovered a “significant medication error” in November 2013. The state requested that RMHS come up with a plan to better track medication, but a January letter from Cohen states DAIL never received such a plan.

Given the “serious nature” of recent incidents, including the “untimely death” of a developmental services client, the state may prohibit certain “home placements and other service arrangements” as it continues to review RMHS operations, Cohen wrote in the January letter. He also requested information about the hiring of a contractor, Health Enhancement Services Inc., which RMHS brought in to help the organization come back into compliance with its grant contracts.

In a February letter to current Board Chair Chris Keyser, Cohen again states the agency was out compliance with its grant contract and restates many of the same concerns enumerated in Chen’s December letter.

Cohen also writes that allowing Dan Quinn, who resigned earlier this week as CEO, to serve as a voting member of the RMHS Board of Directors is not “best practice” for a nonprofit and creates perceived, if not actual, conflict of interest. Keyser said the agency has since changed its bylaws to prevent employees from serving on the board. Quinn could not be reached for comment.

After Chen wrote his letter, RMHS hired Anne Cramer, an attorney with Primmer Piper Eggleston & Cramer, to guide them through its grant negotiations and the redesignation process. Communication between Cramer and state officials shows her acting as an intermediary for the two sides.

Rutland Mental Health is seeking the redesignation of its adult and child mental health programs and its developmental disability programs. The designation process is governed by administrative rules that place ultimate authority with the state to approve designation.

There are standing committees for each program type that are made up of clients, family members and clinicians. Those committees review state findings and the nonprofit’s proposed corrective action plans. They are able to ask the agency questions, and ultimately make recommendations to the relevant commissioners.

The range of outcomes go beyond redesignation or revoking designated status and include various “provisional statutes” that trigger new correction plans. The agency has 30 days to submit a new plan, and once approved, it typically has 180 days to act on it. If corrective action fails, the state can revoke the agency’s designation.

Thanks for reporting an error with the story, "State’s concerns with Rutland Mental Health Services date back ..."