When William MaGill was made House Clerk toward the end of the legislative session last month, there was no discussion or debate and he was elected by a voice vote.

Outside of the Democratic leadership, the Republican minority leader and committee chairs, it’s unclear how many representatives knew when MaGill was elected that he had been disbarred less than a year earlier for failing to act with “reasonable diligence” on a client’s behalf and commingling his money with that belonging to clients.

There were no criminal allegations brought against MaGill, and he voluntarily gave up his law license, but he also did not contest the facts that led to his disbarment.

House Speaker Shap Smith and Minority Leader Don Turner said that while they were aware MaGill had issues winding down his legal practice, neither was familiar with the facts of his case. Smith said he was aware that they had to do with “commingling funds,” but he had not looked into the specifics.

MaGill said he informed the Clerk’s office and the Speaker when his legal license was suspended in 2012 and again when he was disbarred two years later. The House Clerk is not required to have a legal license.

Turner, who nominated MaGill, said it was not clear to him that MaGill was disbarred — only that he was no longer practicing law. (Smith said he told Turner about the disbarment before the nomination, but Turner said he can’t recall precisely what he was told in the whirlwind final days of the session.) Turner did not attempt to share anything he may have been told with his fellow Republicans, he said.

In hindsight, Turner said, “It probably would have been a good idea to have this vetted — at least within the caucus.”

Smith said he shared what he knew about MaGill being disbarred with the House committee chairs, but did not inform the full 150 member body. Other members of the Democratic leadership told VTDigger they were at least partially aware of MaGill’s situation.

Smith and Turner said the facts of MaGill’s misconduct as an attorney has no bearing on his ability to serve as House Clerk, and both said they believe MaGill has done exemplary work for the Legislature.

“I don’t know what happened in his law practice,” Smith said Tuesday, but MaGill’s service as Assistant Clerk has been “above reproach.”

After the substance of MaGill’s case was explained to him, Turner said he would nominate him again today. MaGill has always been fair, straightforward and reliable in his dealings, he said.

“There were opportunities and people knew about it, so it could have been discussed,” Smith said. He said he asked the committee chairs and Turner whether they should seek other candidates, and the consensus was that MaGill was the man for the job. 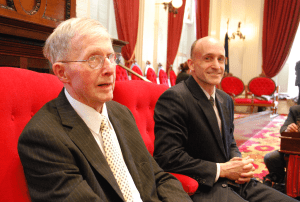 House Clerk Don Milne (left) and William MaGill on the final day of the legislative session. Photo by Elizabeth Hewitt/VTDigger

For the last year-and-a-half, MaGill served as the de-facto House Clerk as his predecessor Don Milne struggled with health problems, Smith said. During that time, Smith and those he consulted felt MaGill had performed admirably, he said.

“We made the decision to have continuity in the clerk’s office with the full understanding that, if it didn’t work out, we could revisit our decision in January of ‘17,” Smith said.

Milne, father of Republican gubernatorial candidate Scott Milne, has served as House Clerk since 1993. His resignation will be effective, and MaGill will take over officially, on Oct. 31, 2015.

Milne also had legal troubles as an attorney, though his were more serious than MaGill’s. In 1966 Milne was charged with forging client signatures and embezzling their money. He was convicted, disbarred and served 18 months in prison, according to a Free Press report.

The Clerk is a silent but powerful force in the House Chamber. Part-parliamentarian, part records keeper, the Clerk keeps order and makes sure that representatives are following the arcane rules and procedures of the House.

What happened? The facts of MaGill’s case

MaGill joined the Clerk’s office in 2003 and became First Assistant Clerk in 2004. By 2010, he was feeling “overwhelmed” by trying to balance his legal practice, his work for the Legislature and issues in his personal life.

A year earlier he had begun to wind down his legal practice, but he continued to serve a “couple of clients,” according to a court filing. In January of 2012, the Board of Professional Responsibility, which handles attorney misconduct, issued MaGill a public reprimand for “failing to communicate with his clients.”

In May, a client filed a complaint that MaGill, as their trustee, was failing to make timely payments on their life insurance policy. MaGill’s license was suspended after an initial inquiry by Disciplinary Counsel, the attorneys who prosecute alleged misconduct by other lawyers. That client did not return a call requesting comment.

An audit of MaGill’s trust account in 2013 found that five checks totaling $9,000 contained “insufficient information” to determine the reason for payment or from which client matter the checks were drawn.

In court filings, MaGill states that while he can’t be “absolutely positive” the $9,000 was all “most likely” earned legal fees. Three of the five checks were dated while the Legislature was in session.

In March 2014 MaGill filed for a No Contest Disbarment in which he acknowledged the “material facts” of his misconduct were true and that he could not “successfully defend against the charges” brought by Disciplinary Counsel — which were that he neglected a client matter, failed to communicate and commingled funds.

Though he did not recognize it at the time, MaGill said that during the period from 2009 to 2012, when the violations took place, he was suffering from “pretty severe depression.” He has since sought professional help and is “in a much better place” today, he said.

It was difficult to seek that help, because he feared the stigma he might encounter if people found out he was struggling with depression. It’s something that’s still hard for him to talk about, he said.

MaGill said he decided it was best for his health and wellbeing to voluntarily give up his legal license. He ultimately found it too difficult to balance private practice, parliamentary work and the tumult in his personal life — “you add it all together it was just the perfect storm,” he said.

“It wasn’t an easy decision by any means,” he added.

Mike Kennedy, an attorney with the Professional Responsibility Program, said that trust account violations, such as MaGill’s commingling of funds, are “far and away” the most common violations that result in disciplinary action.

Kennedy described a No Contest Disbarment as a “streamlined” proceeding that avoids prosecution when an attorney no longer wishes to practice law, or knows they can’t defend against the charges they face and fears they will be disbarred. It’s not a common thing, he said.

It’s impossible to know if MaGill had defended himself against the charges, and was found at fault, whether it would have led to his disbarment, another suspension, a public reprimand or private admonition.

Kim Rubin, Deputy Disciplinary Counsel, who prosecuted MaGill’s case, said she can’t be sure how it would have played out, but added, “I know what I would have expected to be appropriate.” She said sharing her opinion on specific case, however, would violate confidentiality.

Of those 29 cases 12 involved trust account violations. All of those cases resulted in private admonitions. The result of any case, Rubin noted, is a function of the aggravating — or mitigating — circumstances. MaGill was also communicating poorly with some clients and was slow to act on their behalf.

However, it appears unlikely he would have been disbarred as a result, given how similar cases were resolved, and the severity of violations in other cases that led to suspensions or disbarment.

One suspension was the result of a misdemeanor identity theft conviction, and the other is an interim-suspension during a pending investigation.

The two disbarments since MaGill’s were for far more serious violations. One was for making a settlement offer without a client’s permission and falsifying records. The other was the result of a criminal conviction for possession of child pornography.

Thanks for reporting an error with the story, "Newly elected clerk of the Vermont House was recently disbarred"