BURLINGTON — Standing on a platform on the Lake Champlain waterfront he helped preserve, in the city where he forged his political career, Sen. Bernie Sanders, I-Vt., asked thousands of supporters to elect him president and help him build a new political movement.

That movement, Sanders said, will restore democracy in America, rebuild the middle class, protect the environment and, ultimately, reclaim the future for ordinary citizens.

In his inimitable blunt style, Sanders outlined the starkness of the nation’s situation as he sees it.

The wealth gap between rich and poor in the United States is “greater than any other major country on Earth,” he said, and continues to grow. That wealth is being used to rig the political system in favor of the wealthy and corporations, undermining democracy and ultimately American prosperity, Sanders said.

“Not only will I fight to protect the working families of this country, but we are going to build a movement of millions of Americans who are ready to stand up and fight back,” he thundered from the sound stage, with his earnest gesticulating delivery.

Sanders chose a sweltering late-spring day at Burlington’s Waterfront Park to launch his Democratic bid for the U.S. presidency Tuesday. The festival-like event drew more than 4,000 people, according to the Burlington Police Department. The crowd was exuberant and sweaty, with demographics one might expect in Vermont — mostly white, with a range of ages.

Surrounded by labor leaders and progressive activists of all stripes, Sanders pledged his campaign would take its message “directly to the people” across the country in town meetings, door to door, in the streets and online.

Sanders railed against familiar foils: the billionaire class, congressional Republicans, corporate greed and the fossil fuel industry (Ben Cohen, of Ben & Jerry’s who introduced the senator, said Sanders’ refrains would be boring if they weren’t so inspirational).

It is “profoundly wrong” that 99 percent of all new income goes to the top 1 percent of earners, Sanders said. Income inequality is the great moral, economic and political issue of our time, and he promised a presidency that would redistribute wealth in America.

That process will start with “jobs, jobs and more jobs,” he said. 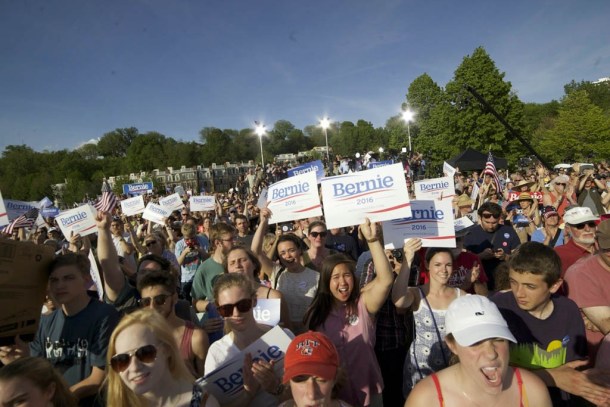 Sanders said he would also push to increase the minimum wage to $15 per hour over “several years” to take workers from a “starvation” wage to a “livable” wage. No one who works a 40-hour week should live in poverty, he said.

He called for comprehensive tax reform to ensure corporations and the wealthy finally “pay their fair share,” and pledged to break up the largest financial institutions in the country, because “too big to fail is too big to exist.”

To get money out of politics, Sanders said he would advocate for a constitutional amendment to overturn the Supreme Court’s Citizens United decision that equates money with free speech, and he would only appoint justices to the high court who are committed to its reversal. Long-term, he said, the U.S. needs to switch to a publicly financed election system.

The nation must also address climate change by leading the transition away from fossil fuels and toward renewable energy.

Sanders renewed his longtime commitment to universal health care, noting that “despite the modest gains” of the Affordable Care Act, there are 35 million uninsured people in the U.S. and the country continues to spend more than other industrialized nations, he said.

He called on his supporters to help spread the message: “Now is not the time for thinking small.” For those who doubt his viability as a presidential candidate, Sanders asked them to consider the location he chose for his campaign launch as an allegory for his presidential aspirations.

When he took office as mayor of Burlington in the 1980s, the waterfront was an “unsightly” rail yard, and not the beautiful public space it is today.

“We took that fight to the court, the Legislature, and the people, and we won,” he said. The lesson to be learned, he said, is that “when people stand together, when people are prepared to fight back, there is nothing that cannot be accomplished.”

State Sen. Anthony Pollina, P/D-Washington, a former Progressive candidate for governor, said the conventional wisdom among pundits and much of the national media discounts the degree to which Sanders’ message will “resonate” with average voters.

That’s because Sanders’ message and the issues he champions are reflected in the daily lives of most Americans who will feel it “on a gut level.”

“I can’t say for sure — I don’t travel the country — but people want somebody who’s going to talk to them and connect with them,” Pollina said.

Running as a D is a “practical,” “reasonable” decision, Pollina said. Sanders can’t win without being in the debates and, Pollina added, he personally can’t wait to see those debates.

“He talks directly about issues that other candidates are scared to talk about,” he said. The Vermont Legislature, he said, wasn’t able to pass a joint resolution on income inequality this year. That’s how Nick Wilson, 27, of Burlington said he felt about Sanders.

“There might be other candidates who talk about those issues,” the Howard Center mental health worker said, “but [Sanders] is the only one who is committed to acting on them in any meaningful way.”

Heather Lanphear, 45, of Woodbury — an hour’s drive from Burlington — was sitting in the bleachers for two hours before the event began in the sweltering heat. Her son lay prone in the shade beneath them.

“This is an exciting, historical moment. There’s no way we weren’t going to be here,” she said.

Bernie’s stance on higher education is appealing to the mother of two. She wants them to have the opportunity to go to college. Neither she nor her husband graduated college — “We’re regular working Joes” — and they can’t afford to pay their children’s way. Earlier, she said she met a young woman with close to $300,000 in student loan debt.

“That’s just not right,” Lanphear said. “Kids should not come out of a four-year education with that kind of debt.”

Sanders still trails significantly in early polling for Democratic primary candidates in New Hampshire and Iowa, and it remains to be seen if his early fundraising can be sustained. Former First Lady Hillary Clinton is favored and former Maryland Gov. Martin O’Malley is expected to announce his candidacy this week.

Sanders’ first campaign stop as an official presidential candidate will be Wednesday in New Hampshire, home of the nation’s first primary. He will be in Iowa on Thursday. Sanders was not circumspect about the political challenges he would face in winning his presidential campaign: low voter turnout, general political malaise and the moneyed interests he’s spurned.

In one meme posted to the Bernie Sanders for President 2016 Facebook page, white text over a gesticulating Sanders says, “If everyone who says ‘I’d vote for him but he can’t possibly win,’ would vote for him … He would win.”

Whether or not that’s true, it neatly summarizes the sentiment among supporters, that if the fair-weather fans could be brought into the fold, the Vermont senator has a chance.

As he exited the stage to Pete Seeger’s rendition of Woody Guthrie’s “This Land Is Your Land” and people streamed out — or waited to get free Ben & Jerry’s ice cream (their catering coordinator estimated they gave out 70 pounds) — the excitement that Sanders might be able to once again beat the odds was palpable.

Thanks for reporting an error with the story, "Thousands boost Bernie Sanders onto the campaign trail"