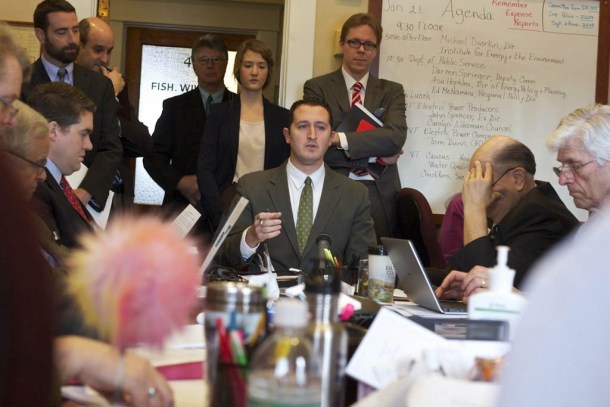 Darren Springer, deputy commissioner for the Department of Public Service, presented details of a new renewable energy program, known as RESET, to a packed House Natural Resources and Energy Committee during the opening weeks of the legislative session. Photo by John Herrick/VTDigger

At the start of the legislative session, the Shumlin administration presented lawmakers with a fix to what they said was a looming 6 percent statewide increase in the price paid for electricity.

The bill, H.40, would resolve that concern, allowing utilities to continue earning about $50 million in revenue from the sale of RECs. The bill repeals Vermont's current incentive program, known as SPEED, and for the first time sets mandatory renewable energy targets. Double counting would not be allowed. This is similar to energy policies in all other New England states.

It was the risk of a rate increase that helped to build support for the bill through the Senate on the eve of adjournment despite attempts to tack on provisions that would have limited where renewable energy projects could be built. The issue of siting is likely to resurface next year when a summer task force presents proposed legislation at the start of the session.

The renewable energy standard puts the state on a track to continue building renewable energy projects, such as wind, solar and new technologies like manure digesters. This bill requires that 55 percent of a utility's electricity come from renewables, including large-scale hydro power, by 2017. The target increases the ratio to 75 percent by 2032.

Some of the electricity must come from in-state projects limited in size. The Department of Public Service estimates at least 25 megawatts of new generation must be built in Vermont each year over the life of the program.

The expansion of renewable energy has spurred resistance from municipalities and neighbors who are concerned about where the projects are built. While towns pushed for more of a say in the Section 248 permitting process before the Public Service Board, most environmental advocates say renewable energy is a public good that should not be obstructed by local opposition. Fearing unintended consequences, lawmakers passed a policy putting in place statewide setbacks and local screening for solar projects. Towns will also have automatic party status in the permitting process for solar projects.

The bill requires an annual report beginning in 2018 on the impacts of the program on electric rates, including projections 10 years ahead. Utilities can apply for waivers if they prove the requirements would increase electric rates.

No action was taken on a carbon tax this year, but a foundation is being set for a full debate in the years ahead.

Just months before the start of the legislative session, advocates announced a campaign to put a price on carbon emissions, the top greenhouse gas responsible for climate change. Lawmakers then began discussion on a controversial policy that they expected would take at least the entire session.

Advocates say putting a price on carbon would cut emissions, grow the economy and generate revenue needed to transition off of fossil fuels. Fuel dealers and industry leaders oppose the tax. Gov. Peter Shumlin prefers a national carbon tax because a state tax, he says, would harm the state's economy.

Some green businesses testified this year in support of the tax, arguing it would benefit the long-term financial stability of their operations that have been stymied in the past by extreme weather events like Hurricanes Irene or Sandy. One non-partisan consulting firm, Regional Economic Models Inc., found the tax would grow the state’s economy, largely because most of the revenue would be used to reduce other taxes under a tax model proposed by advocates.

But lawmakers are treading lightly on the issue. Fuel dealers are strongly opposed to the tax, arguing it will hit the 4,000 workers in Vermont’s fuel delivery industry, especially in border communities. The proposal by advocates would exempt electricity, but retailers are concerned about energy costs.

Gasoline wholesalers dodged an effort by lawmakers to launch an investigation by the Attorney General’s Office into conspiracies of price fixing in northwestern Vermont.

Gasoline prices are higher in the Burlington area because of the high cost of doing business and low traffic to recoup cost, dealers say. But some lawmakers and the Attorney General’s office have hinted it may be due to lack of competition or illegal price fixing, though they have no evidence to confirm the suspicion.

One bill was intended to help the Attorney General’s office investigate conspiracies of collusion and price fixing among wholesalers and dealers. The bill would have required the reporting of gasoline sales from wholesalers to dealers and that dealers give the Attorney General advance notice of any station purchases in order to keep tabs on consolidation.

The bill was attached to the miscellaneous agriculture bill in the Senate, but in a floor vote, lawmakers determined it was not germane. The Attorney General's Office says they are willing to speak with anyone who suspects there is price fixing occurring.

Thanks for reporting an error with the story, "Legislative Wrap: State passes ambitious renewable energy goal"

Brian Ricca: Students learn best when they are safe and welcomed