Editor's note: This article is by Robert Audette, of the Brattleboro Reformerc, in which it was first published April 28, 2015.

BRATTLEBORO -- Following a review on an application from Entergy, the Nuclear Regulatory Commission has concluded there will be no significant environmental impacts if emergency preparedness at Vermont Yankee nuclear power plant in Vernon is scaled back. 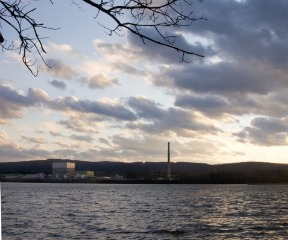 Vermont Yankee on the banks of the Connecticut River. Photo by Deborah Lazar/Special to The Commons

The boiling water reactor at Yankee ceased operations on Dec. 29, 2014. Less than one month later, Entergy filed with the NRC an exemption request from federal regulations that haven’t been updated to address potential emergency scenarios and the differences between an operating power plant and a shuttered plant.

“The presidentially appointed commission that oversees and sets policy for the NRC has tasked the agency’s staff with formulating new regulations in the area of nuclear power plant decommissioning,” said Neil Sheehan, spokesman for the NRC. “That would be achieved through the rulemaking, or regulation development, process. But because of the many steps involved, including public involvement opportunities, that process can take several years. As such, any changes would not have a bearing on the Vermont Yankee exemption requests currently pending before the NRC.”

Sheehan noted that all of the other U.S. nuclear power plants that have permanently ceased operations have been granted exemptions allowing changes to their emergency plans.

“The basis for the approvals is that the risk of a severe accident at a plant is significantly reduced once the reactor will no longer operate. In the case of Vermont Yankee, the proposal is for the Emergency Planning Zone to go away 15.4 months after the last batch of fuel was removed from the reactor, at which point the fuel’s temperature would have dropped significantly.”

The 30-day clock for public comment on the statement will start after the report is published in the Federal Register, which should take place within the next several days.

Entergy has selected the SAFSTOR decommissioning option and has 60 years to clean up the site. The estimated decommissioning cost is $1.24 billion in 2014 dollars. Currently, the trust fund established for cleaning up the site has about half the amount necessary.

The current emergency plan for Yankee will remain in effect until April 2016, when the nuclear waste in the plant’s spent fuel pool has decayed enough to limit the type of accident that could occur if the ability to cool the pool was damaged enough to cause an emergency.

There are 2,996 assemblies in a cooling pool and 884 assemblies already placed into 13 steel-reinforced concrete casks. Entergy has applied to the Vermont Public Service Board to build another concrete pad to store the casks necessary for emptying out the spent fuel pool, which is expected to be completed by 2020.

After all of the spent fuel is moved to dry storage, the fuel will remain on the spent fuel storage pad until the Department of Energy removes it from the site.

CORRECTION April 29, 2015, 10:25 a.m. -- The Reformer incorrectly stated Vermont Yankee’s spent fuel pool contains 2,628 assemblies, but that was prior to shutdown. Following the ceasing of operations at Yankee, fuel assemblies were moved from the reactor into the cooling pool. It now contains 2,996 assemblies.

Thanks for reporting an error with the story, "NRC says no significant environmental impacts to Entergy’s reduced ..."