A number of Vermont farmers would like to grow hemp, which has uses ranging from cosmetics to biofuel. There’s a catch, however: The federal government could arrest them for growing the plant because it is a variety of the marijuana plant. 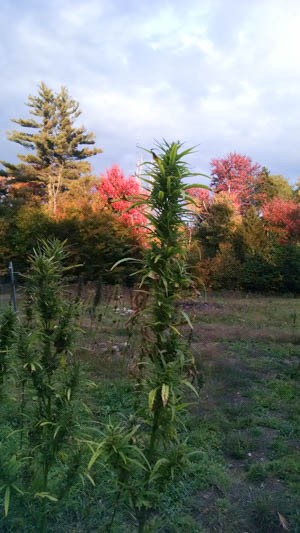 It’s a question of opportunity for farmers like Ken Manfredi and his partner, Robin Alberti, who grew a quarter-acre of hemp last year on leased land in the town of Chittenden.

And it’s hardly a new idea – George Washington and Thomas Jefferson, both of whom were farmers, grew hemp because of its utility.

Marijuana and industrial hemp are two varieties of the same species, Cannabis sativa. By definition, however, industrial hemp contains no more than 0.3 percent of tetrahydrocannabinol, or THC, the psychoactive ingredient in the plant, and cannot produce a high unless consumed in large quantities.

Act 84 legalized the growing of industrial hemp in Vermont, with the caveat that producers register with the state and be notified that cultivation of the plant remains a violation of the federal Controlled Substances Act of 1970. In 2014, however, President Barack Obama signed a farm bill under which higher education institutions and state agriculture agencies could grow industrial cannabis “for purposes of research conducted under an agricultural pilot program” notwithstanding the act, which treats all cultivars of the species as illegal.

The 357 pages of the farm bill made no mention of the Drug Enforcement Agency (DEA), which enforces the Controlled Substances Act. Federal narcotics officials have, however, long required that anyone importing cannabis seeds obtain a permit; and importing seeds from places where hemp cultivation is fully legal is the recourse for research institutions, since there are no U.S. suppliers of certified hemp seed – that is, seed certified to have the characteristics sought, such as high oil or fiber content. University of Vermont field crops expert Heather Darby said that some of her faculty colleagues have taken an interest in working with hemp.

“Initial research, if we receive proper permits, will focus on basic production and agronomy,” she said in an email. She noted that companies as diverse as cosmetics manufacturer Nivea and automaker Ford “have been in contact with us here in Vermont, looking for opportunities.” The latter, she elaborated, “would use the fiber in a number of interior parts of the vehicle — dashboards would be one.”

But having to start with seeds that the DEA treats as marijuana puts the university in what she termed “an interesting situation. Do you move forward with research and put yourself at risk of prosecution?”

“The DOJ and the DEA aren’t part of the farm bill – they don’t follow the same rules,” she said, referring to the Department of Justice, which includes the DEA. “It doesn’t make a lot of sense.”

The Controlled Substances Act “creates a closed system,” DEA spokesperson Barbara Carreno said. To track materials in that system, it requires registration of the substances’ handlers.

In theory at least, the act tasks the DEA “with tracking the flow of all controlled substances in the United States. Collectively, that would include all the seeds,” Carreno elaborated in a follow-up email. Monitoring every cannabis seed once it enters the country may seem as hopeless a task as following a BB pellet as it rolls around in a boxcar, and as legalization of cannabis gains momentum across the country, but the DEA is not abandoning what it perceives as its duty.

In the tug of war over cannabis, the agency has yielded some ground. In May 2014, three months after the farm bill’s enactment, the state of Kentucky imported 130 kilograms of hemp seeds from Italy, only to have the DEA seize the shipment on its way to several Kentucky universities and farmers contracted for a pilot growing program overseen by the Kentucky Department of Agriculture. Two lawsuits ensued. The DEA backed off and allowed the program to proceed.

“At this point, we don’t see importation as being a limiting factor on the program, because we have a process that is satisfactory to both DEA and the [Kentucky] Department of Agriculture,” said the department’s industrial hemp program coordinator, Adam Watson.

Some Vermonters are eager to test industrial hemp’s potential here. Last year, 17 parties registered to grow the crop. Tim Schmalz, who manages the registry at the Vermont Agency of Agriculture, said the registrants expected to grow 190.41 acres all told, but only about an acre was actually planted. The shortfall, he said, was because of difficulties in getting seed and the tendency of would-be farmers not to realize the amount of work involved.

As of March, only five parties have registered with the state to grow the crop this year. They include Joel Bedard of Huntington, who said he hoped to get through the DEA red tape and import as much as 3,000 pounds of seed, which would yield up to 100 acres to be cultivated by farmers contracting with him as a broker. He sees hemp as a jack-of-all-trades crop and identified two Vermont breweries that might make hemp beer. The crop’s uses, he said, include remediation of polluted waterways, since very dense plantings filter runoff, preventing it from entering the water.

Hemp is also “capable of fixing heavy metals [and even] radioactive isotopes,” he said. “It was utilized at Chernobyl.”

Some cultivars’ seeds, he said, contain up to 30 percent oil, a percentage he termed “off the charts. And the hearts are more nutritious than flax seed. And it’s gluten-free.”

For processing, his crops would go to Full Sun Company in Middlebury.

Netaka White, a co-founder of Full Sun, grew a garden plot of industrial hemp using low-THC seed ordered online from Europe last year – enough to yield a pound of seeds. This year, he intends to plant that seed, which he hopes will produce 60 pounds. In 2016, a 60 pound planting could yield a two-ton seed crop, enough by his calculation to plant 260 acres in 2017. That season’s yield would be enough to begin commercial processing for feed meal as well as food oil, which UVM’s Darby characterized as “the low hanging fruit” for Vermont’s nascent hemp industry, since processing facilities such as Full Sun already exist.

Too small to bust?

White did not obtain a DEA permit to import his seed. The DEA hasn’t come after him, he said, because “I really have to believe that the DEA doesn’t have a lot of interest in pursuing small endeavors.” An August 2013 policy memorandum issued to U.S. attorneys by Deputy Attorney General James Cole, outlined eight priority areas for enforcement of the Controlled Substances Act. Cultivation of industrial hemp was not one of them.

For their 2014 crop, Manfredi and Alberti, who like White have signed on to the state registry, ordered food-grade hemp seeds from abroad, since hemp as food can be imported legally, although the growing characteristics of the noncertified seed are unknown. They viewed the effort as experimental.

But, even with their quarter-acre – a thousand plants — “we still had the biggest legal plot in the Northeast,” Manfredi said.

Manfredi and Alberti are using the yield from those plants solely for seed.

“We’re going to expand from what we did,” Alberti said. “We’d love to get as many acres as we can.”

She and Manfredi would like ultimately to concentrate on growing a high-oil variety for pressing. They are not growing the seed on their own land, however, and that could put the farmers hosting the crop at risk of an uninvited visit from the DEA. 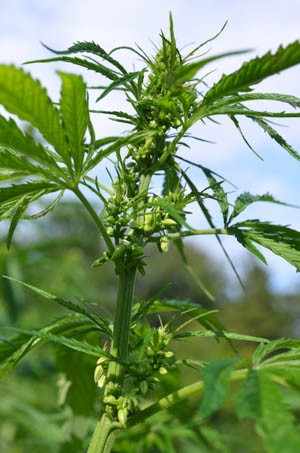 “The Farm Bill does not exempt farmers in general from federal law that prohibits the growing of hemp,” the DEA’s Carreno said. Such farmers “could be at risk of DEA action. That said, in allocating its enforcement resources, DEA applies the guidance” in the Cole memo.

All of which answers the crucial question of possible busts with a definite maybe. In an interview, Schmalz expressed the uncertainty hovering over growers: “DEA reserves authority to come in and intervene if they feel someone is growing cannabis that might be more than 0.3% THC.”

Against that backdrop, Manfredi, Alberti, Bedard and White are supporting legislation in Congress that would remove barriers to the commercial production of industrial hemp by simply excluding low-THC cannabis from the federal definition of marijuana.

Sponsors include majority leader Mitch McConnell, R-Ky., in the Senate and Peter Welch, D-Vt., in the House. In a noncommittal statement, the office of Sen. Patrick Leahy, D-Vt., said he looked forward to “consideration of the bill on its merits” in the chamber’s Judiciary Committee, of which he is the ranking member. Jeff Frank, a spokesman for Sen. Bernie Sanders, I-Vt., said only that Sanders had sponsored similar legislation in the past.

With Kentucky — and cannabis-friendly Colorado — already making strides in hemp production, Vermont’s challenge may be to leverage its advantages before hemp’s potential finds a home in other states.

“If farmers are growing hemp for human consumption, for example, or the production of cosmetics, the Vermont label has a certain value,” Schmalz noted, alluding to the marketing factors that give “pure Vermont maple syrup” an aura that “pure Wisconsin maple syrup” hasn’t matched.

“We’re breaking new ground, and there are going to be some hiccups, but once they’re ironed out, hemp is … a good addition to the crops that Vermont farmers can grow,” Schmalz said.

“I imagine it is just a matter of time,” UVM’s Darby said, “before all this [legal wrangling] seems ridiculous and people look back and wonder how this happened.”

Thanks for reporting an error with the story, "Slow growing: Hemp cultivation stymied by federal rules"