The landmark legislation launches a cleanup effort expected to take decades in waterways such as Lake Champlain. It aims to curb pollution runoff from farms, roads and developed areas and raises $8 million in state revenue to support the cleanup.

Proponents say the bill is a historic step toward restoring dozens of impaired lakes, ponds, rivers and streams. Farmers, municipalities and private landowners will shoulder the more stringent pollution prevention measures. Much of the money included in the bill will be used to leverage federal funds and provide grants for projects. 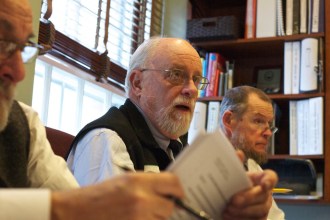 David Deen, D-Westminster, chair of the Fish, Wildlife and Water Resources committee, defended the bill as concerns were raised about how to pay for it.

“Now is the time for us to put our money where our mouth is. We say we want clean water, but are we willing to pay for it?” Deen said told House lawmakers late Wednesday.

The lawmakers later approved $8 million in new revenue for fiscal year 2016. This includes $2.3 million in fee increases largely paid by polluters, and $5.7 million through a 0.2 percent surcharge on the property transfer tax that sunsets in six years. The fees would pay for 20 new staff positions to implement the state’s water quality plan. The tax revenue would go into a new Clean Water Fund.

Some Republicans wanted to use existing money in the state budget to pay for the cleanup. They proposed an amendment to redirect money currently allocated from the property transfer tax to leverage government bonds. The amendment was voted down along party lines, 100-40.

Water quality advocates said the policy makes long overdue changes in state law to address pollution sources across all sectors. But some question whether the bill could have placed more stringent regulations on polluters.

“It’s a mile wide and an inch deep,” said Kim Greenwood, a staff scientist with the Vermont Natural Resources Council. “It touches on all of these programs but it doesn’t require that much from all of them.”

Others say it could do more to remediate waterways that are already polluted. Currently, the state does not include a plan to restore South Lake and Missisquoi Bay. The state has set a 20-year timeframe for restoration of Lake Champlain.

Ehlers said the bill should include a pilot program for projects that would pull phosphorus out of the water, such as a floating island where plant roots suck phosphorus from the water column. Lawmakers and officials say the state needed to rein in pollution first.

Phosphorus is a nutrient that is blamed for blue green algae blooms on Lake Champlain in summer. The algae produce toxins that can cause illness in humans, pets, fish and waterfowl.

“Unless you stop the inputs of pollution into the waterbodies, you are just fighting a losing battle. You have to control those first for it to be cost effective to do an in lake or in stream remediation,” said David Mears, commissioner of the Vermont Department of Environmental Conservation.

The bill will require all farms — including small farms, which have yet to be defined — to self-certify that they are in compliance with the state’s water quality rules.

The bill will help educate farmers about their responsibilities and provide them the financial support to make changes to their operations, according to Chuck Ross, secretary of the Agency of Agriculture, Food and Markets.

Farmers who continues to violate water quality rules after a three-step enforcement process — a warning letter, a cease-and-desist order and an official notice of violation — will face civil penalties from the agency. The bill also allows the agency to remove farms from the state’s current use program, which provides tax breaks, if farmers continue to violate water quality standards.

The bill funds seven new farm inspectors, bringing the total number up to 12.

“I think they all should be refamiliarizing themselves with the (accepted agricultural practices),” Ross said. “I think they need to understand that we are about building a new culture across Vermont within the farming community with respect to our concerns and effort to improve water quality. We need their help.”

The Agency of Agriculture, Food and Markets has the authority to update the accepted agricultural practices, or AAPs, which were first adopted in 1995. The bill requires the agency to update the rules to include new standards for manure stacking, livestock exclusion and tile drainage by July 1, 2016.

Water quality advocates want new standards adopted sooner. They say the bill could do more to limit runoff from farms, which accounts for 40 percent of Lake Champlain’s phosphorus load. The Conservation Law Foundation is among those calling for stricter pollution controls in the most affected waterways.

The bill ramps up the state’s stormwater management program by targeting existing developed land, such as roads and parking lots.

The bill gives the Agency of Natural Resources the authority to require permits for existing developments of three acres or greater. The bill also requires stormwater permits for new roads.

The legislation does not change existing stormwater permits. Currently, only construction that disturbs one acre or more needs a permit. Water quality advocates want to see the threshold reduced to half an acre or less to capture more runoff.

“It would get at more commercial developments and certainly more single-family residences. When you look at what the developments are like in Vermont, that’s a large part of new impacts that are not covered anywhere,” said Greenwood, of the VNRC.

Mears said his department is open to the idea because these smaller developments could add up to a lot of pollution. But he said the bill requires the agency to study the costs and benefits of the proposal. A report is due by Jan. 15, 2016.

“We’re certainly open to it and it is certainly an issue,” he said. But, he added, “we feel like we have enough on our plate at the moment. We don’t want to lose focus on priorities.”

In the Lake Champlain basin, only 9.9 percent of all impervious coverage is permitted under the state’s stormwater management program, according to the Department of Environmental Conservation.

Vermont Way or the EPA Way

Most House lawmakers were aware that federal regulators are watching to make sure the state has the resources it needs to implement the plan it submitted to the Environmental Protection Agency to restore Lake Champlain’s water quality. The EPA is overseeing the creation of a new plan and will use a Total Maximum Daily Load, or TMDL, that requires the state to reduce phosphorus pollution by 34 percent. A draft decision on whether to adopt the state’s plan is expected this spring.

Mears said the bill will allow his agency to carry out the state’s implementation plan.

“We’re headed in the right direction. But there is still room for things to get off the tracks,” he said.

If Vermont fails to provide so-called “reasonable assurances” that it can clean up the lake, EPA will step in with its own plan.

Gov. Peter Shumlin has been critical of the EPA’s approach. “Their way makes no sense,” Shumlin said last week. “Their only tool is to require us to swap out every single wastewater treatment plant in Vermont for hundreds and hundreds of millions of dollars.”

EPA could remove the state’s authority to implement the Clean Water Act. That would mean EPA’s Region 1 Office in Boston would issue stormwater permits — not the Agency of Natural Resources — and the state would lose federal grant money for local watershed groups and towns. Vermont would also see longer permit delays and less coordination among the state’s agencies, according to Stephen Perkins, director of ecosystem protection for the EPA’s Boston office.

“We don’t work for the governor,” Perkins said in a recent interview. “The Vermont sources would go on a long list that includes the New Hampshire and Massachusetts sources. We’ve got water quality challenges in those other states as well. And EPA would not get any additional staff to do the additional work. It would just get added to the pile.”

“I don’t feel like we would get a huge environmental benefit from them overseeing environmental programs in Vermont, but I feel like it would be a massive wake-up call for Vermont to have that delegation revoked,” said Kim Greenwood, a staff scientist with the Vermont Natural Resources Council.

Perkins said the bill appears to give the agencies the authority and ability to carry out the state’s plant — though the plan still lacks details on how to address agricultural pollution in certain lake segments.

“But it’s also the case that certain doors could get closed in the last few days of the legislation working on this,” he said. “It looks right so far.”

Thanks for reporting an error with the story, "Legislative redux: Water quality bill with $8 million in new revenue ..."