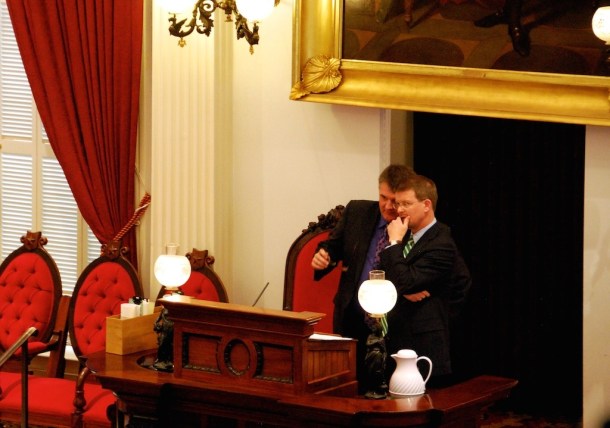 [A]fter spending 10 weeks erasing an massive budget deficit, the House gave final approval to two bills that will constitute the backbone of Vermont’s finances in the coming fiscal year.

Earlier, lawmakers sent the budget’s companion tax bill on its way to the Senate. H.489 raises $33.2 million through changes in the state income tax code.

Lawmakers convened in January needing to fill a $113 million gap between projected revenue and expected spending. As passed by the House, the general fund budget for FY 2016 totals $1.47 billion, a 4.8 percent increase over this year’s $1.407 billion general fund budget.

On both sides of the aisle, lawmakers were unhappy to see the elimination of state funding to a low-income home energy assistance program (LIHEAP) in the budget. Paid primarily through support from the federal government, the budget removes $6 million in state money from LIHEAP.

The House did approve an amendment to the bill offered by Rep. Susan Davis, P-West Topsham, to bolster the fund if state revenue improves. Under the amendment, the first $5 million of general fund surplus in the next year will go to LIHEAP.

Rep. Mitzi Johnson, D-South Hero, chair of the Appropriations Committee that crafted the spending plan, said that the success of the amendment confirms the commitment that the Legislature has to LIHEAP. 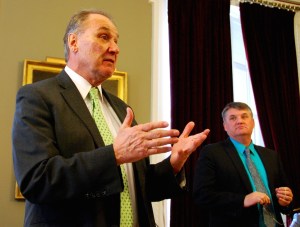 Rep. Paul Poirier, I-Barre, offered an amendment that would restore $3 million of state funding to LIHEAP. He did not propose a source of funds for his amendment, which would have put the budget out of balance. His amendment failed, 115-24.

Although Vermont is not bound by law to pass a balanced budget, the Legislature has a strong tradition of doing so.

Poirier warned that federal support for LIHEAP benefits could wane this year with a change of party leadership in Congress.

Earlier this week, Rep. Peter Welch, D-Vt., rallied bipartisan support in Washington, D.C., to ask that Congress support $4.7 billion for LIHEAP nationwide, which would be $1.7 billion more than the amount appropriated this year.

Lawmakers in Montpelier on Friday also voted down an amendment that would have cut $40 from their current weekly pay of $679.

Rep. Job Tate, R-Mendon, proposed an amendment that would reduce pay for legislators to $639 per week in FY 2016. Under the budget, lawmakers are slated for a raise to $690.

“I believe we need to share some of the pain,” Tate told the Appropriations Committee earlier in the day.

The amendment proved unpopular on the floor, too. A cut in pay would make it harder for low-income Vermonters “to be part of the conversation here in this building,” said Rep. Sarah Buxton, D-Tunbridge.

Tate raised a disapproving murmur from members of the House when he said, in response to the concerns of Buxton and others, “We can all absorb it.”

Tate later apologized for his comments.

Ultimately, an amendment from Rep. Oliver Olsen, I-Londonderry, was substituted for Tate’s. Olsen’s amendment, which was defeated on a voice vote, would have allowed legislators to take a voluntary cut in pay and give that to the charity of their choice.

H.489 raises $33.2 million in taxes. Partnered with a fee bill that already passed the House, the legislation provides $35 million in new revenue.

The bill changes two aspects of the state income tax. It caps itemized deductions at 2.5 times the standard deduction, which would shake out to be $15,500 for an individual or $31,000 for a couple filing jointly. It also eliminates deductions for state and local taxes from the previous year.

Several Republicans helped to usher the bill through a preliminary vote Thursday by a narrow margin, after Progressives and liberal Democrats supported an amendment to find an additional $12 million in revenue.

However, House Minority Leader Rep. Don Turner, R-Milton, made it clear that the Republican Party does not support the new revenue.

“Please, no more taxes,” Turner said in a statement on the floor after the vote Friday.

The House rejected two amendments that would have cut back on the amount of revenue raised.

One amendment, proposed by Rep. Paul Dame, R-Essex Junction, would have exempted anyone who makes less than $60,000 a year from the itemized deduction cap.

Thanks for reporting an error with the story, "House passes budget, tax bills"