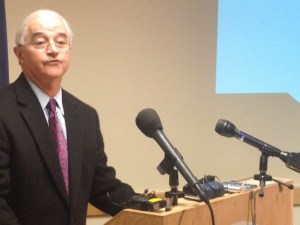 Corren, a Progressive who also earned the Democratic nomination in his bid for lieutenant governor last fall, is accused of asking the state Democratic Party to send an email to party supporters on behalf of his campaign.

Corren received more than $180,000 in public financing in his bid to unseat Republican Lt. Gov. Phil Scott. As a condition for receiving public money, Corren was prohibited from “soliciting contributions” or “facilitating related expenditures” from any other source, Sorrell said at a Wednesday news conference.

The Vermont Democratic Party reached a “settlement in principle” with the attorney general, agreeing to pay up to $10,000 in fines for not reporting the email as an expenditure, though that agreement has yet to be finalized. 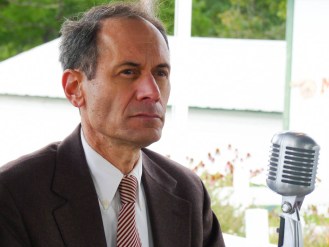 An Oct. 24 email blast from Dottie Deans, Democratic state chair, with the subject line “How you can help me help Dean Corren,” went out to more than 16,000 people on a Democratic supporter list. That’s the equivalent of a $255 donation, according to Sorrell, which Corren didn’t pay for or list on his campaign finance reports.

Corren could be subject to fines for two violations: Taking an in-kind contribution and not reporting. Each carries a penalty of up to $10,000. Sorrell is seeking an additional $52,000 from Corren, because the law requires publicly financed candidates to repay the balance of public funds at the time of a violation, which for Corren was $52,000, according to Sorrell.

Corren did not return requests for comment Wednesday, but his attorney John Franco said the countersuit, filed five days ago in anticipation of Sorrell’s lawsuit, argues that the VDP email fits within “several different exemptions” in the public financing law.

The countersuit, filed in federal court, also challenges the constitutionality of Vermont’s campaign finance laws on the grounds that they violate the First Amendment by not giving publicly financed candidates the same freedom of political association as other candidates.

“Nobody’s going to run for office under the public option if they’re looking at a catastrophic penalty for an inadvertent violation,” Franco said. “I mean, they’re going after Dean’s retirement,” he added.

The attorney general said he finds it unlikely that the violation was inadvertent.

After receiving a citizen complaint about the VDP email, Sorrell’s office began an investigation. The probe turned up emails between Corren’s campaign manager, Megan Brooks, and VDP staff that show Corren requested and helped craft the email blast.

That and other evidence gathered in the investigation make it a “tall order” to believe that Corren’s violation was inadvertent, Sorrell said. Corren signed an affidavit stating that he understood and agreed to abide by Vermont’s campaign finance laws before accepting the public funding, Sorrell said.

In addition, emails between VDP and Corren show both sides had attorneys involved and were aware that coordinating the mass email had potential legal implications, according to Sorrell.

Sorrell said his office will look at whether portions of the $52,000 were “irrevocably committed” at the time, and should be excluded, but said state law leaves “little room for debate” over what penalties should be enforced.

In a statement, the Democratic Party said the attorney general’s allegations “involve claims where reasonable minds could differ.”

“To avoid the cost of litigation and move forward, both for the benefit of the Party and the State, the VDP decided to settle with the Attorney General’s Office,” the statement said.

As part of the settlement, VDP will agree to cooperate with Sorrell’s office in its investigation and litigation against Corren.

Sorrell said he does not believe a federal court should have jurisdiction over the suit Corren filed against him and he will seek to have it transferred to Washington (County) Superior Court, where his civil lawsuit against Corren was filed Wednesday.

Because Corren filed his suit several days before Sorrell filed his, the Superior Court lacks jurisdiction, Franco said in an email.

Below is the text of the email sent by Deans on behalf of Corren in late October:

“Dear Friends,
Many of you know I’m a strong supporter of Dean Corren for Lt. Governor but maybe you don’t know why. Dean has the skills and experience to support our Vermont Democratic Party Platform and overcome some of the greatest challenges we face.

Dean has openly shared his positions and ideas for stimulating the economy, enacting health care reform, supporting job growth and positioning Vermont to be a leader in taking on climate change. In addition, he has been enthusiastically endorsed by the Vermont Democratic Party’s State Committee and some of our most prominent leaders.

I believe Dean would make an excellent Lt. Governor, but to make this happen we all need to pitch in. Here are a few ways you can help.

1. Come to a Rally! This weekend we are joining Senator Bernie Sanders, Governor Peter Shumlin, Dean and local candidates at four GOTV rallies across the state. Come to one nearest to you!

3. Tell Your Neighbors! We are working every day to talk to voters in Vermont into getting to the polls on Election Day. Sign up to volunteer for a shift here. For other ways to help, please [email protected]

I appreciate all the work you are doing on behalf of our candidates around the state and look forward to celebrating great victories with you on the 4th. Now get out and vote for Congressman Peter Welch, Governor Peter Shumlin, Dean Corren for Lieutenant Governor, and the rest of our amazing Democratic ticket!

Thanks for reporting an error with the story, "AG seeks up to $72,000 from Dean Corren for alleged campaign violatio..."