Editor’s note: This story is by Tommy Gardner, of the Stowe Reporter, in which it was first published March 19, 2015.

A cost-saving proposal to close a prison in Windsor is causing alarm, because the inmates prepare vegetables to help feed the hungry in Vermont.

An inmate at Southeast State Correctional Facility shows Gov. Peter Shumlin how to properly weigh a bag of potatoes during a packaging session in November 2012. Photo by Alicia Freese

Salvation Farms, a Morristown-based organization, works with area farmers to get their surplus late-season crops to food shelves, schools and hospitals.

The nonprofit group has been employing inmates from the Southeast Regional Correctional Facility in Windsor to do some of the work and recently raised $156,000 to renovate a prison building to increase output.

The House Appropriations Committee is trying to close a $113.2 million gap in the state budget, as revenue continues to lag behind projections.

The committee is now discussing about $13 million worth of cuts, including $820,000 from closing the Windsor prison. The prison houses 100 inmates.

The shutdown would also put the Salvation Farms’ project in limbo, which is already underway. The nonprofit has raised $73,500 from 130 individuals and businesses and $82,500 from 10 foundations to renovate the food processing facility at the prison.

The organization has spent $20,000 for design expenses and invested $7,000 in Black River Produce, which trucks the produce between the prison and the various food shelves and institutions.

“For a small organization of 1.75 employees, it’s taken a lot of energy and determination, and it would be unfortunate to lose this,” Theresa Snow, Salvation Farms’ founder and executive director, said last week. “It has substantial program implications for us, as we try to build the Vermont Commodity Program.” 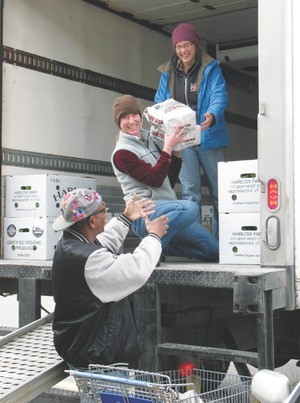 Krempecke was “really upset” to hear that the prison could be on the chopping block, “especially now that (Snow) finally got it together. As a small organization, we’re in awe when someone can raise that amount of money.”

The Vermont Commodity Program, launched at the prison in 2012, “gleans” surplus crops that might otherwise rot on the vine or wind up in the compost pile. So far, according to Snow, 275,414 pounds of gleaned produce has been processed at the prison with the help of about 50 inmates. That volume — more than a quarter-million pounds of crops such as potatoes and winter squash — came from only 14 farms over three harvest seasons. More than half of it, 187,000 pounds, has gone to the Vermont Foodbank.

Last Friday, Snow asked the House Appropriations Committee to reconsider the plan to close the prison.

The $13 million savings package was introduced by committee chairwoman Rep. Mitzi Johnson, D-South Hero, and includes cuts to Vermont Health Connect, the Vermont Housing and Conservation Board, Vermont Public Television, the Department of Innovation and Information, and the Department for Children and Families.

Even with the aforementioned proposed cuts, Johnson’s plan for the state budget comes up short by $1.26 million.

“At some point, when you’re digging this deep, the cuts become really difficult,” Johnson said.

House Speaker Shap Smith, D-Morristown, said he’s a big fan of Salvation Farms — Snow agreed he’s been supportive over the years — but he also thinks the state has to look at whether it has more prisons than it needs. He said the proposal to close the Windsor prison is really about long-term savings and efficient management of the Department of Corrections.

“I certainly think the work that Theresa has done is great, and I’d be concerned about the potential impact” of closing the prison, Smith said. “I would hope that it could be replicated somewhere else, because it’s a really good idea.”

Snow and Jennifer O’Donnell started Salvation Farms in 2005, and independently gleaned produce to deliver to food shelves in this area and to the Vermont Foodbank, with which it eventually joined forces in 2008. Salvation Farms became independent in 2011, with its own board of directors, and the next year began its relationship with the Southeast Regional Correctional Facility.

Along the way, the list of organizations that receive produce through Salvation Farms has grown. Several places in the Windsor area now receive food, as do longtime partners in Lamoille County.

Krempecke said getting fresh produce 10 years ago was a game-changer for Lamoille Community Food Share. The organization gets cleaned and packaged potatoes from the Commodity Program for 12 cents a pound, delivered right to its Morristown doorstep. 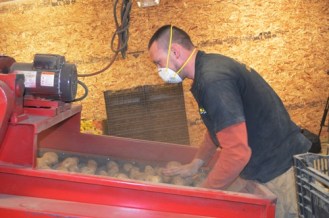 “We all have those staple items, canned goods and packaged foods, but to have the addition of fresh vegetables is just huge,” Krempecke said. “That started the ball rolling for us.”

She also sees a connection between people serving prison sentences and the circumstances that lead other people to seek help feeding themselves and their families.

“We will see families where there’s maybe a family member who’s taking care of children because someone is incarcerated,” she said. “And then the person comes out of prison and they’re looking for work, and they come in looking for food.”

Indeed, inmates who work with Salvation Farms, both in the fields and at the packing facility in Windsor, have said harvesting, cleaning and packaging food for others is empowering, a way to contribute to a society they wronged in some way. Snow used one inmate’s testimony in her appeal to the House Appropriations Committee.

“You have given me a chance to expand my knowledge and understanding in how our food is grown and handled, as [to] where it comes from; in doing so ignited a passion per se in seeking stronger ties with the world around me,” the unidentified inmate said.

Snow thinks that, instead of closing prisons and sending Vermont prisoners out of state, the corrections system should do more help inmates rebuild their lives when they leave prison. Snow has worked alongside convicted sex offenders, thieves and drug dealers, in her work at Salvation Farms, and she said prisoners would benefit from the same kind of support that is made available to addicts and borderline criminals: anger management counseling, job search assistance, substance abuse counseling and money management training.

Snow said Salvation Farms raised the money for the prison program because it knew state money was tight. And Salvation Farms already has plans for expanding the Commodity program within Windsor, by working with the Department of Corrections to make the concept part of its industry plans.

“Our goal for the next two years is, with this renovation, to continue improving the concept,” she said. “If Vermont is fortunate enough to retain this prison, it has even more benefits than what we’re using it for.”

Thanks for reporting an error with the story, "Food program may be hurt if Windsor prison closes"