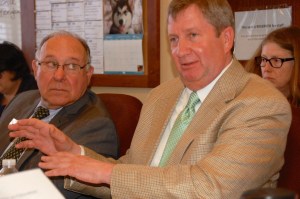 A bill that would prohibit Vermont public school teachers from striking passed the House Education Committee on an 8-3 vote Tuesday.

The bill, introduced by Rep. Kurt Wright, R-Burlington, originally required mandatory binding arbitration in contract disputes, but that language was struck. The bill instead calls for mediation and fact-finding but bans strikes while the two sides work toward an agreement.

“I think we’ll be doing a good thing for Vermont,” Wright said just before the vote. “I think this is a bill that’s found a reasonable compromise, and I hope that the committee will support it.”

“I think it changes the balance of negotiations in favor of school boards and that it will work to suppress wages in the state,” said Sharpe, the committee chairman. “Recognizing that 80 percent of school costs are in the cost of labor and benefits, the problem, in my view, is the number of people that are hired, not the wages of any individual person.”

A spokesman for the Vermont NEA called the bill “anti-union.”

“If the Legislature wants to ban teachers’ strikes and ban school board impositions, the final decision must be submitted to binding arbitration,” Darren Allen said. “What happened today can only be viewed as hostile to unions and disrespectful of teachers.”

Before the vote, the committee heard from Massachusetts and New Hampshire experts about how those states handle teacher labor negotiations and impasses. Every other state in New England prohibits teacher strikes.

In Massachusetts, mandated bargaining is required, the committee was told, and in most contract negotiation cases, the sides bargain to conclusion.

The state has had two strikes in the past 20 years, Glenn Koocher, executive director of the Massachusetts Association of School Committees, told the committee. He said if continued work to reach a resolution does not occur, it becomes very costly for both sides.

“Nobody wins a strike, pretty much everyone loses in a strike,” Koocher said. “So when the expectation is that you will bargain to conclusion, people find a way to reach settlements, and they usually do.” 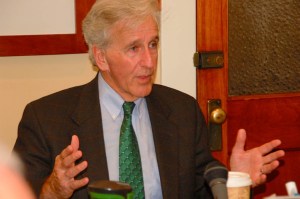 Joel Cook, director of Vermont-NEA, addresses the House Education Committee about a bill that would ban teacher strikes. Photo by Amy Ash Nixon/VTDigger

Joel Cook, director of Vermont NEA, offered the committee an analogy of the impact of teacher strikes over a 40-year period.

Cook said that except for one long “brutal” teachers’ strike in 1985 in the town of Hinesburg, which went for 84 days, strikes have been short. Since that time, all of the strikes in Vermont combined tally up to only 150 days.

Cook suggested that the impact of teacher strikes had seen less disruption over time to children’s education in Vermont than snow days.

Wright bristled at that comparison.

He pointed to the town of Colchester, which, he said, “still has scars” from a teacher strike that played out there about a decade ago.

“Snow does not cause a parent in South Burlington to say, ‘I will not be able to look at my teacher in the same way after the strike,’” Wright said.

“It would help if we kept in mind the relatively small dimension of the problem — we all ought to at least acknowledge this perspective. Any time there is a snowstorm that blankets the state of Vermont, that single day causes more disruption to our students than the entire history of teacher strikes in the state.”

Under the bill, negotiations would occur 60 days sooner than they do now. If a contract cannot be reached in six months, the Vermont Labor Relations Board would hold a hearing and recommend a settlement to the parties. The board can also seek to mediate a dispute.

There would be a penalty imposed on the homestead tax rate in communities where failure to meet a contract goes on a year past the contract expiration.

Stephen Dale, executive director of the Vermont School Boards Association, said it is in everyone’s best interest, in terms of reaching a settlement, to avoid long periods in which teachers are operating without a contract.

The bill allows the parties to agree to go to binding arbitration if necessary, the committee was told.

The ban on strikes removes the “nuclear option,” Wright said.

“When an impasse occurs that is not able to be resolved by mediation, the negotiations will simply continue, they will operate under their existing contract,” he said. “There are incentives for both sides to resolve the dispute within a timely fashion. That’s the guts of the bill.”

“The School Boards Association is very supportive of collective bargaining as a means of getting fair working conditions for teachers,” Mace said. She said the collective goal needs to be attracting and retaining the best teachers for the state’s public schoolchildren.

The VSBA is open to banning strikes, but is opposed to mandatory binding arbitration, Mace said.

Thanks for reporting an error with the story, "Bill banning teacher strikes approved"

Don Keelan: Except for a few, everybody in Vermont is a flatlander