The Attorney General’s offices signed a petition on Jan. 27 requesting the Nuclear Regulatory Commission to investigate Entergy’s financial health. The plant in Vernon permanently shut down last year, but the state says long-term activities at the plant could affect the safety of Vermonters. 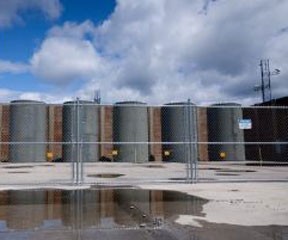 The dry cask storage units outside of the Vermont Yankee plant. Photo by Laura Frohn, News21.org

“The State of Vermont has a direct interest in the NRC abiding by its statutory duty to ensure that Vermont Yankee’s owners and operators have—and will continue to have—the ability to pay for these activities,” the state told NRC in their letter.

Entergy, the Louisiana-based company that purchased the plant in 2002, has set aside a special decommissioning trust fund to pay for nearly all expenses since the plant went offline on Dec. 29. These expenses include the moving of spent nuclear fuel from a cooling pool into long-term dry casks, as well as keeping the site secure.

“The 2.206 petition filed by the Citizens Action Network is without merit. The licensees remain financially qualified to own and operate the facilities, and are committed to safe operations at those facilities while meeting all NRC requirements,” said Marty Cohn, an Entergy Vermont Yankee spokesman.

He said the company has submitted a Post-shutdown Decommissioning Activities Report to the NRC demonstrating that the plant’s decommissioning trust fund will be adequate to complete decommissioning activities, including spent fuel management, safely and within the time period allowed by the NRC.

But the state and Entergy disagree over what costs should be recovered from the decommissioning trust fund. The state wants the company to keep in place a 10-mile radios emergency planning zone and emergency monitoring system. 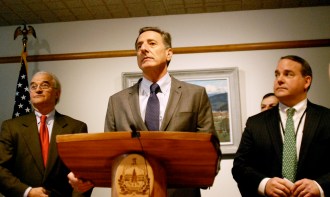 “I’ve been concerned for quite some time what they want to use the decommissioning trust fund for given the fact that they say they are not going to put any more money into the fund,” said Attorney General Bill Sorrell. “I think there are very few Vermonters who want the decommissioning process to be unduly long.”

Entergy has said these are unnecessary expenses for a plant that is no longer producing power — or making money. Any additional costs to the company will likely come out of the decommissioning trust fund and therefore delay decommissioning.

“Vermont Yankee is its own entity. It’s a non-operating facility generating no money,” Cohn said. “We are meeting every requirement by the Nuclear Regulatory Commission.”

Some residents in the emergency zone say the parent company should step in to pay for basic safety functions at the plant.

“It’s madness not to have the emergency planning in place. This should come from the parent company,” said Deb Katz, the executive director of the Citizens Awareness Network, one of the groups that joined in the original petition sent to the NRC in spring 2013.

In March 2013, a financial investment firm said two of Entergy’s reactors, Vermont Yankee and FitzPatrick in New York, were financially tenuous. Between 2011 and 2013, the companies' net income for the plants dropped nearly 70 percent. As a result, the nuclear watchdog group filed a petition calling on the Nuclear Regulatory Commission to investigate Entergy’s financial health. The New York and Massachusetts attorneys general supported the petition to investigate the company’s finances. 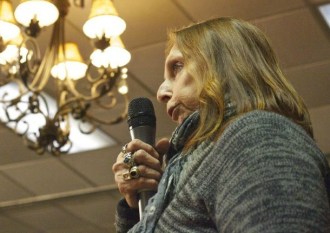 Deb Katz, the executive director of the Citizens Awareness Network, spoke before the Nuclear Regulatory Commission during a hearing on the decommissioning of the Vermont Yankee nuclear power plant in Brattleboro on Thursday, Feb. 19, 2015. Photo by John Herrick/VTDigger

“If even operating they weren't going to make money, but lose money, then there were real questions about whether safety would be compromised,” Katz said.

But in 2013, the company said it would close the Vermont Yankee plant for economic reasons. In January it removed all spent nuclear fuel from the reactor and is in the process of transferring spent nuclear fuel from a cooling pool into dry casks. It will then begin the process of dismantling and decontaminating the plant, a process that will take decades.

The state said regulators should determine whether Entergy — and its subsidiaries or parent company — has enough money to pay for decommissioning without relying on the decommissioning trust fund.

The company wants to eliminate its off-site energy planning. Entergy says the plan will save money and expedite the decommissioning process. The state opposes the plan, and says emergency planning should remain in place until all spent nuclear fuel is placed into dry casks. The state said it would even consider allowing Entergy to use the decommissioning trust fund to pay for these costs.

"I’m willing to talk about that,” said Department of Public Service Commissioner Chris Recchia. “I actually think this is a function of a plant that was operating and I don't think it’s appropriate. That said, we are willing talk.”

The current emergency planning zone casts a 10-mile radius that includes 18 towns in Massachusetts, New Hampshire and Vermont. The company has requested eliminating this planning zone to the limits of the plant compound about one year after its shutdown. Entergy plans to reduce staffing levels at the power plant from 316 to 127 workers by June 2016. The company says the employee drawdown will hasten the decommissioning process. Maintaining staffing levels for emergency response through 2020 would cost an additional $120 million, Entergy says.

Katz is among the advocates that want the company to only move spent nuclear fuel into dry cake when school is not in session at the Vernon and Hinsdale elementary schools.

“What you have done is you have extended decommissioning by years,” Cohn said. “We believe that the process in place for the moving of spent fuel from wet to dry is one that has been proven that can be done safely to not only our employees but the public as well.”

Thanks for reporting an error with the story, "Vermont seeks details on Entergy's finances"