Lawmakers are working on a bill that would change the way utilities buy and sell renewable energy credits.

State officials want to repeal the Vermont's current energy development program, known as the Sustainably Priced Energy Enterprise Development Program, or SPEED, for economic and environmental reasons and replace it with a new renewable portfolio standard.

If the state doesn't set new rules for renewable energy generation, ratepayers could face a $50 million increase in electricity rates, a roughly 6 percent rate hike statewide. In Burlington, rates could go up as much as 20 percent.

The so-called Renewable Energy Standard and Energy Transformation or RESET program would replace SPEED. RESET requires utilities to sell power generated from renewables like wind and solar, and make investments in the heating and transportation energy sector to replace fossil fuels.

Under RESET, 55 percent of a utility’s electricity must come from an existing renewable generation plant. By 2032, that number increases to 75 percent. Approximately 40 percent of the state's electricity now comes from renewables, according to the Department of Public Service. 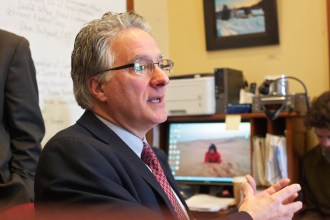 Robert Dostis, director of government affairs at Green Mountain Power, presents lawmakers with a report on the utility's power supply portfolio during testimony before the House Natural Resources and Energy Committee on Wednesday. Photo by John Herrick/VTDigger

Meanwhile, Vermont's electric utilities are asking the Legislature for more flexibility in order to comply with the new renewable energy program.

“The greater flexibility in this, the better, because there are a lot of unknowns,” he said.

Dostis said the utility plans to meet most of its obligation through hydroelectric facilities and a contract with Hydro-Québec. He said about 47 percent of the utility's electricity supply comes from resources that would qualify under the program.

The company’s contract with Hydro-Québec expires this year. It is entering into a new 20-year contract for the power that will supply up to 30 percent of the utility’s power supply at 5 cents to 7 cents per kilowatt hour.

Green Mountain Power could sell its Hydro Quebéc credits, but other states are unlikely to buy them because, unlike Vermont, most don't count existing, large-scale hydro toward their top-level renewable energy goals.

To comply with the state's renewable energy goal, utilities will trade renewable energy credits, or RECs, with power suppliers in New England. The value of the credits vary based on supply and demand, and the type of renewable power they represent.

Under Vermont’s program, all existing renewable energy sources count toward the state’s compliance target. That means utilities can sell high-value credits — largely from wind and solar farms in Vermont — and purchase less expensive credits that other states cannot use to meet compliance goals. Utilities say it will be easy to meet their obligation under the program.

Burlington Electric Department can sell many of the credits from the McNeil biomass plant, as well as other renewables in its portfolio, for $50 per credit on the regional market; in exchange, the utility can purchase second-tier credits for less than $5 per credit, said Ken Nolan, manager of power resources for BED.

“I don't think it will be too difficult, nor do I think it was intended to be,” Nolan said.

Connecticut passed a law that may prohibit utilities from purchasing Vermont renewable energy credits, and other states may follow Connecticut's lead. If Vermont were unable to sell credits, there would be a 6 percent rate increase statewide, according to the Department of Public Service.

“You take what could be a 20 percent rate increase if we are carved out of the Connecticut market and have no recourse, and you turn it into a half-percent rate impact,” Nolan said.

Sandy Levine of the Conservation Law Foundation has concerns about the RESET program. She said most other states in New England require utilities to purchase credits from new projects that come online. She said Vermont could do more to encourage construction of renewable energy infrastructure.

“It would be very helpful for Vermont to provide additional incentives for new renewable energy,” Levine said. “And if all we are doing is playing with our accounting practices and not actually building and using more renewable power, we fall far short of meeting our renewable energy goals.”

The proposed program would require that utilities meet at least 1 percent of their retail sales with new, in-state renewable energy projects that are less than 5 megawatts in size. This target increases to 10 percent by 2032. If the goal is not achievable, utilities can ask regulators for permission to build larger projects.

Dylan Zwicky of the Vermont Public Interest Research Group supports the RESET program. He said he will work with lawmakers to create incentives that will speed up development of small scale energy generation projects in Vermont.

“One of the goals of a [renewable portfolio standard] is to actually get more renewable energy built," Zwicky said. "As this proposal is drafted, it’s pretty clear that we are going to continue to build out small-scale renewable at the pace we already do.”

One utility executive said more wind power will be necessary because many alternatives are less cost effective. 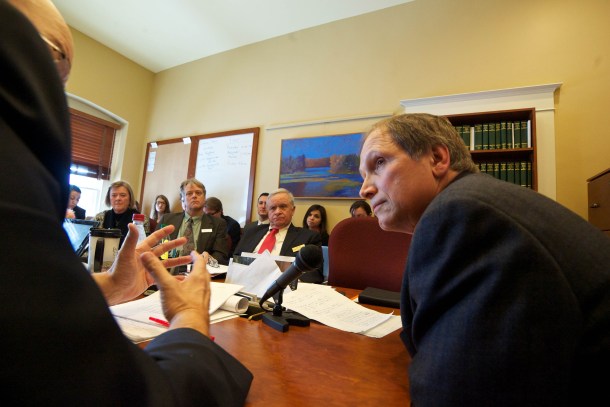 “If you don’t have wind you’re not going to make it. ... There are no alternatives,” said Vermont Electric Coop CEO David Hallquist. “It’s physics.”

The bill also requires that utilities invest in technologies that replace fossil fuels in the heating and transportation sector with cleaner electricity, a policy dubbed “strategic electrification.” This would mean that utilities would be responsible for installing heat pumps, electric vehicle charging infrastructure and other measures that reduce fossil fuel consumption, for example.

Utilities want more flexibility in how they satisfy this requirement.

Burlington Electric asked lawmakers to revise the bill so that utilities are not entirely financially liable for certain investments in projects that turn out to be less cost effective than predicted. The change the utility is proposing would allow it to recover costs from ratepayers.

Nolan, of BED, said there may be cases when certain investments may be considered cost effective, but it may turn out that some assumptions were not perfect. He said if regulators approve the assumptions, the utility should not be on the hook.

“That’s not something that we are used to doing. So we are going to be making some assumptions and designing programs that are not traditional utility programs,” Nolan said.

The new program is raising questions about the effect added consumption will have on electricity prices. In year one, the investments the utilities would have to make are equal to installing 2,000 air source heat pumps, according to the Department of Public Service.

The department says utilities must encourage customers to run their appliances at times when energy demand is low, and when electricity costs less. Otherwise, consumption will add to the region’s peak, sending up prices and requiring investments in new infrastructure to handle the load.

Utilities are considering ways to deter customers from using electricity when demand is high, and rewarding consumption when rates are low. Equipping electric appliances with smarter technology may allow the utility to dial up and down the appliances to avoid rate shocks.

Dostis said all appliances are going to become smarter so that they can turn off and adjust based on load.

“If you have a dryer and when there is plenty of energy it can fire up on all cylinders and when energy is needed, or the grid just needs more power, it can automatically turn off,” he said.

But some lawmakers say constituents do not want utilities controlling their electricity consumption. Also at issue are privacy concerns about the data utilities would collect to manage demand.

Hallquist said there should be provisions in the bill that would allow regulators to make changes to the program if necessary.

“You are treading into an arena that has a lot of risk,” Hallquist told lawmakers. “And I applaud you for that.”

Thanks for reporting an error with the story, "Utilities want flexibility under renewable portfolio standards"