[G]ov. Peter Shumlin says the fiscal year 2016 budget is the “toughest” he’s ever had to deliver to the Vermont Legislature. He made the remark in delivering his fifth budget address to lawmakers Thursday afternoon.

The governor’s budget fills a $94 million gap between state spending and tax revenues by spreading cuts across state government and raising $20 million in new revenues through the elimination of a tax break used by 30 percent of tax filers and other sources.

“Like a family trying to adjust its budget to meet reality, it is our responsibility as state leaders to match spending with Vermonters’ ability to pay,” Shumlin said. “Government must be effective, efficient and affordable.”

The governor said he recognizes the state faces a structural economic problem. The state has faced eight years of budget gaps, and the economic situation isn’t expected to change anytime soon. State revenues are projected to increase by 3.5 percent annually for the next five years, while expenditures have increased by 5 percent or more in the past few years.

The hour and 15-minute speech was part two of the governor’s state of the state address. A week ago, Shumlin was re-elected to office by lawmakers after he narrowly beat out Republican Scott Milne in the general election.

In his inaugural address, the governor outlined a plan to clean up Lake Champlain and enhance investments in the state’s renewable energy sector. The inaugural ceremony was interrupted by protesters who were incensed that the governor decided to abandon his single payer health care initiative just before Christmas.

While his inaugural address sidestepped the concerns of voters who are uncertain about the state’s economic future and are weary of high property tax rates, the second half of the governor’s address tackled these issues head on.

“We know many of the drivers of this unease: Rising health care costs and rising property taxes and no corresponding rise in incomes and property values,” Shumlin said.

The governor drew applause from lawmakers when he talked about driving down the cost of health care. The most controversial health care proposal will likely be the introduction of a 0.7 percent payroll tax to boost Medicaid reimbursements for doctors and hospitals. The tax would raise about $55 million from January through June of 2017. All of those proceeds would be funneled into a special health care fund. Medicaid reimbursements would be increased from 60 percent of provider costs to Medicare levels, which reimburse at 80 percent. The Shumlin administration says the higher reimbursement rates will soften the impact of the Medicaid cost shift that has increased insurance premiums.

When he laid out a plan for cutting education spending that includes eliminating small school grants and phantom student subsidies, and giving the State Board of Education the authority to close schools, lawmakers murmured.

The governor’s proposed fiscal year 2016 General Fund budget of $1.47 billion represents a 1.8 percent increase over this year’s budget. The gap between spending and revenues was originally $100 million. The total was reduced by $6 million because less money was needed to cover retirement obligations.

The pain is meted out between state workers who will see a $5 million reduction in contracted pay and benefits that has not yet been negotiated, an array of Agency of Human Services grants and programs which will be cut by $22 million ($6 million of which will come from the Low Income Heating Assistance Program), $22 million in reductions in spending across the rest of state government.

“My budget relies on the principles of balance,” Shumlin says. “We cannot just restructure and cut to close our $94 million hole without inflicting significant damage upon Vermonters who need us.”

The governor emphasized that Vermonters’ tax burden is already “high enough,” and he does not raise income tax rates, sales or rooms and meals taxes, he does eliminate an income tax loophole.

Shumlin plans to eliminate the deduction for state and local taxes paid the previous year claimed by tax filers who itemize. The change generates $15.5 million in new income tax receipts. The administration says 30 percent of Vermont income taxpayers itemize deductions. The average cost per taxpayer is $175 per year, according to Jim Reardon, the commissioner of the Department of Finance and Management.

The administration also proposes to use $2.8 million of the property transfer tax and $1.71 million in revenue from the U.S. Marshals use of 60 beds for inmates in St. Albans to balance the budget.

The Shumlin administration also plans to restructure government and consolidate programs that officials say will save money in the long run.

Here is a sampling of proposed cuts:

• Reducing the amount the state allows for property tax relief on farm buildings from 100 percent to 70 percent, boosting state revenues by $1.6 million.

The cuts to state government and programs are on top of $34 million in reductions the Shumlin administration and the Joint Fiscal Committee made in July after economists downgraded state revenues. Income tax receipts have consistently fallen short of expectations in 2014 and have continued to come in under the new estimates from state economists.

Jeffrey Carr, the Shumlin administration’s economist, and Tom Kavet, the Vermont Legislature’s economist, will present a new consensus revenue forecast for fiscal year 2016 to the governor and lawmakers next week.

House Speaker Shap Smith says the governor struck the right balance between revenues and cuts, but "we'll have to vet it more fully." 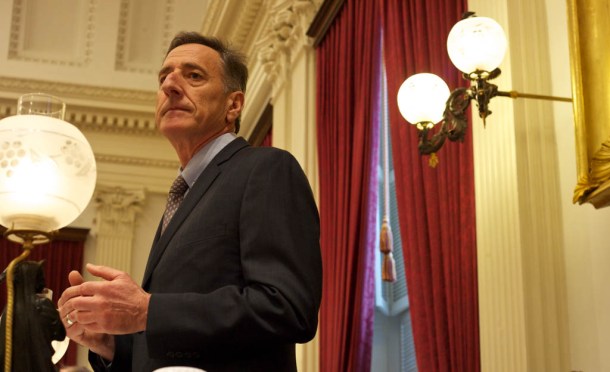 Smith said there are reductions lawmakers will not be comfortable with (he pointed to LIHEAP as an example), "but the reality is if we don't go forward with them we have to put an alternative on the table."

Republicans complained that the budget numbers were not made available 24 hours before the governor's address. In the past the GOP members of the House and Senate have had time to read the budget detail in advance.

Shumlin touted his administration's job growth and economic development efforts. He proposed spending more on tourism and marketing and making more investments in the Vermont Economic Growth Incentive, which has leveraged $21.4 million in new full-time payroll. New companies in North Bennington, Springfield and Essex that have taken advantage of the state cash incentives will create 550 high-paying jobs, Shumlin said.

"Vermonters need to understand these annual budget gaps are self-inflicted by the governor," Turner said. "Our caucus was predicting this year after year and we couldn't prove it until last year when the budget that came out of this body that we didn't support ended up with a rescission of $31 million in the fall. We have been saying for the past couple of years 3 percent growth, they've been spending over 5, it's just not sustainable."

Lt. Gov. Phil Scott, the only Republican holding statewide office, said in a statement that he had difficulty adding up "the cuts proposed versus the additional taxes levied."

“There were a number of areas within the speech where I do have concerns, one being that, while I agree we have a structural problem with the Medicaid cost shift, I’m hesitant to fund the ‘fix’ through a payroll tax," Scott said. "Opening the door to even a small increase will, in my opinion, lead us to further tax growth. Once that seed is planted, we have a tendency in this building to over-fertilize, and I fear there will be further proposals to increase taxes on Vermonters and small Vermont businesses, who are already struggling to make ends meet. I am also concerned the Governor may be overly optimistic in regard to negotiating $9 million in savings with the Vermont State Employees Union, as well as the sustainability of leveraging state dollars in order to receive what could be one-time federal money.

Thanks for reporting an error with the story, "Shumlin spreads the pain in budget address"