[V]TDigger’s choice as the top story of 2014 is barely 10 days old. For our voters, Gov. Peter Shumlin’s Dec. 17 announcement that the state could not afford to pursue a publicly financed health care system in the near future drove to the finish line like Secretariat. 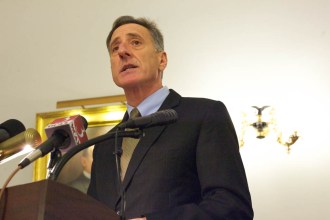 Gov. Peter Shumlin announces that single payer health care will not go forward in the next legislative session. Photo by John Herrick/VTDigger

After waiting two years for the administration to share a financing plan, Vermonters finally learned how much it would cost. The answer was “too much,” given the state’s tepid recovery from the recession and an unexplained decline in personal income tax forecasts.

Shumlin somberly reported the news that, at least for now, his dream of making Vermont the first state in the nation to provide universal, publicly funded health care was over. The governor called it the “biggest disappointment” of his public life.

The anticlimactic decision was celebrated by opponents of the plan, many of whom enjoyed their “I told you so” moment, and it was jeered by supporters, many of whom felt betrayed by Shumlin’s abandonment of the idea. 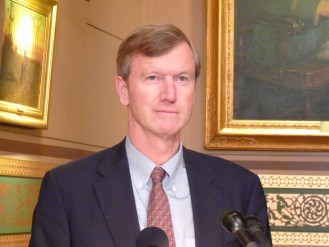 The result, which is not official until the Legislature chooses a governor on Jan. 8, was seen by pundits as a repudiation of Shumlin’s policies, positions and personal style. He admitted to being humbled by the lack of voter support and vowed to better “listen to Vermonters,” if lawmakers give him a third term.

Milne has refused to concede the election, although he did not contest the results and has acknowledged that Shumlin won more votes.

The website of the state’s Obamacare health insurance exchange continued to experience glitches for a second year and was shut down in mid-September for about eight weeks.

Security concerns prompted federal officials to warn Vermont that it would be disconnected from the federal data hub if it did not address the issues. The site was back online for new customers to sign up during open enrollment last month.

However, small businesses are still unable to use this system and existing customers were urged to avoid the site to extend their coverage. Users are also still unable to make changes to their accounts online and billing issues have plagued many of the insured.

4. Vermont Yankee to pull the plug

Vermont’s 42-year affair with its only nuclear power plant will start a new chapter Monday, when the reactor will no longer produce energy.

Entergy, the Louisiana-based company that owns the Vernon facility, announced late in 2013 that it would close the plant for economic reasons.

The company last fall released a decommissioning plan that put the cost of removing the plant at $1.24 billion. The process could take up to 60 years, but Entergy and the state have said it might happen sooner.

This list was compiled by a vote of VTDigger staff and freelancers. Voters chose from a list of more than two dozen stories we covered in 2014.

The violent deaths of two toddlers who were placed back into homes by the state’s Department for Children and Families put a spotlight on how child protection officials make decisions regarding child safety.

More social workers were added in the wake of those deaths and several investigations followed, aimed at improving the way in which social service agencies, courts and police share information. The Legislature is expected to address some of the findings in the upcoming session.

Rumors turned to reality in October as a company owned by the Emirate of Abu Dhabi completed a transaction to acquire IBM’s chip-making facilities in Vermont and New York.

IBM gave GlobalFoundries $1.5 billion to take over those operations, which include IBM’s facility in Essex Junction. GlobalFoundries said it intends to keep producing the computer chips in Vermont. Once Vermont’s largest private employer, IBM has steadily reduced its workforce over the past several years.

The highlight of the 2013-14 biennium was a law that won’t go into effect for two years and could cost up to $5 million to defend.

Several participants in a federal immigrant investor program spoke out against changes made to their agreement with Jay Peak Resort to build the Tram House Lodge.

Several of the 35 investors in the project say the terms of their contracts were altered without consulting them and that they weren’t notified of those changes for months. Jay Peak managing partner Bill Stenger said the changes were legal, but admitted to mistakes in notifying the participants.

The investors also contend that their complaints to the state’s regional EB-5 center were dismissed, and that the center is too closely aligned with Jay Peak management.

The election that nearly gave Republican Scott Milne a plurality of votes for governor also changed the fortunes of the GOP in the Statehouse.

Republicans, who had been losing ground to the Democratic and Progressive “supermajority,” rebounded in November by picking up a net of eight seats in the House and two in the Senate.

Almost every candidate VTDigger spoke to during the campaign season said voters were telling them that property taxes are too high and getting higher.

This issue trumped single payer for almost all of them and lawmakers apparently heard the message. Democrats have made education finance reform a centerpiece for the new Legislature and the administration has sent its top education official into the field to meet with school districts on cost containment.

Finishing just outside the money were the saga of MIT economist Jonathan Gruber and the state's ban on using a hand-held electronic device while driving, which tied at No. 11.

Thanks for reporting an error with the story, "Year in Review: VTDigger's Top 10 stories of 2014"

Frustrations over racial equity simmer on the Vermont Climate Council

By Tom Kearney and Maggie Reynolds

Darryl Benjamin: What it’s like to move to Florida as a liberal