The Shumlin administration is calling for an end to Vermont’s primary renewable energy program.

The administration is considering a plan instead that would require the state’s electric utilities to sell a certain amount of renewable power to Vermont customers, an official said Monday. Vermont is the only state in New England without such a requirement.

The new program would replace the state’s voluntary SPEED program with a mandatory renewable energy standard. Darren Springer, deputy commissioner of the Department of Public Service, provided the department’s recommendation for a net metering program to the House Committee on Natural Resources and Energy. Photo by John Herrick/VTDigger

“We see an opportunity at the department to transition from the SPEED program to a new renewable energy program,” said Darren Springer, deputy commissioner of the Department of Public Service.

The switch could affect the transportation and heating sectors, which make up the majority of Vermont’s fossil fuel consumption, according to a three-page report by the Department of Public Service sent to lawmakers Monday.

Unlike Vermont’s current renewable energy program, known as SPEED, a renewable portfolio standard, or RPS, would likely require utilities to sell a certain percentage of their renewable power to customers in Vermont. This power includes low-carbon emitting wind, solar and biomass, for example. The new standard would reduce the carbon footprint of Vermont residents; utilities would no longer be allowed to sell renewable energy credits to other states.

The department is considering a mandatory requirement for utilities and will present a proposal to lawmakers in early January, according to Springer. Springer did not provide additional details on the plan.

Rep. Tony Klein, D-East Montpelier, chair the Natural Resources and Energy Committee, is drafting a renewable portfolio standard bill. He said the legislation would require utilities to “retire,” or keep, some of the renewable power that is generated in Vermont. That means the utilities could not sell that renewable power to outside entities through renewable energy credits, as the SPEED program allows. 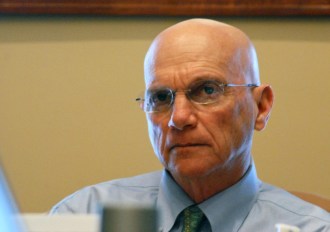 “There is going to be a requirement,” Klein said, who has been speaking with the department about a bill. “There is definitely going to be some sort of level that they are going to have to retire.”

House minority leader Rep. Don Turner has said he wants to make sure the RPS proposal does not affect rates. Springer said the department wants the program to provide a net benefit to ratepayers.

The administration wants to include the heating and transportation sectors in the new program, which together account for more than two-thirds of Vermont’s fossil fuel consumption, according to the department.

“I think what we are talking about today is a broader vision that might include elements from [a renewable portfolio standard], but that has more to it. And we’re talking in concept,” he said.

He said electricity provides clean heating and transportation options that could reduce the state’s fossil fuel emissions. Technologies that use electricity in these sectors include air source heat pumps and electric vehicles. Springer said the department would also have to consider the impact the technologies have on driving up peak demand.

The administration is not considering mandates for thermal and transportation technologies. He also said the proposal would not affect electric efficiency (as opposed to thermal) because the sector is already regulated and recognized nationally for its success.

The state’s current SPEED program is scheduled to sunset in 2017, and Springer said now is a good time to rethink the state’s renewable energy program. He said the program should be phased in to give regulators, utilities and energy brokers time to adjust. He said the change is necessary in order for the state to reach its ambitious goal of 90 percent renewable use by 2050.

Another reason, he said, it to “harmonize” with the other New England states, which already have renewable portfolio standards. Utilities in the region buy and sell renewable energy certificates, which account for the renewable power on the electric grid. Utilities purchase the credits and sell them to their customers.

Some utilities are concerned the market for Vermont power will dry up under the current program. Vermont utilities sold $46 million in renewable power credits in 2013. Failure to sell this power could result in a 6 percent rate increase, the department estimates.

Outgoing state Sen. Peter Galbraith, D-Windham, a critic of utility-scale renewable energy generation, prompted the department to review whether it would be feasible for Vermont utilities to keep all of the renewable power sold after July 1, 2014.

The department believes this is a bad idea. The report states that retiring RECS is “not the most cost-effective manner in which to achieve Vermont’s energy goals” and would cost ratepayers $14 million per year in 2017 and later years. Galbraith’s amendment never became law.

“I think that the provision that saying all SPEED projects without exception should have RECs retired is not even consistent with other regional programs,” Springer said. “It’s almost punitive to say that we are not going to allow you to participate in the regional market as some other states do.”

The state has built wind, solar and other renewable power generation that could supply about 15 percent of the state’s electric retail sales. The state’s goal is to generate 20 percent by 2017, but there is no requirement in state law that this power is to be sold to Vermont customers.

Even though Vermont’s program does not require it to retire credits, some utilities do sell renewable power generated from hydro, smaller scale net-metered projects and power that utilities keep in their portfolio.

Thanks for reporting an error with the story, "Administration prepared to scrap SPEED program"