House Republicans filed a public records request Thursday for work produced by economist Jonathan Gruber for the Shumlin administration, and for communications between Gruber and state officials.

Gruber is under contract to provide policy advice and perform economic modeling of different single-payer financing options, though the governor says the MIT professor’s job is limited to economic analysis.

The MIT professor’s credibility has been tarnished by a series of on-camera remarks denigrating the public and touting the benefits of limiting transparency. 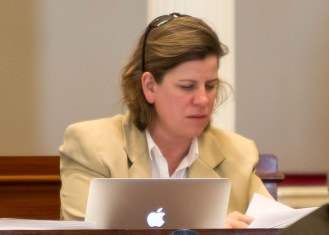 That in turn has caused Republicans and others in Vermont to question his role in developing the governor’s plan for single-payer.

“Given Mr. Gruber’s history of deceiving the American people by manipulating the data and purposefully causing confusion, it is also critical that we understand exactly what Mr. Gruber has said about the Vermont health care reform efforts, and the process he has employed to do the work,” said Rep. Heidi Scheuermann, R-Stowe, in a statement Thursday.

Scheuermann and several other Republican lawmakers said that it’s “incomprehensible” for the governor to rely on Gruber for accurate information given that the economist has, they say, manipulated data for political ends.

In 2006, Gruber’s econometrics greatly underestimated what it would cost to provide insurance subsidies as part of the Massachusetts health reform program, which became the model for the Affordable Care Act.

During the national debate over the Affordable Care Act in 2010, Gruber penned an op-ed for the New York Times making arguments about how the law should be crafted, without disclosing he had a consulting contract with the Obama administration — despite having signed an agreement with the Times to disclose any such conflicts.

Gruber has agreed to forgo close to $120,000 in compensation, which the Shumlin administration requested he do, arguing that his recently publicized remarks devalue the work he’s doing.

But Republicans say docking his pay is only half of the equation.

“The second, more important, issue is trust. That Governor Shumlin continues to rely on the work of someone who has already proved he is willing to dupe the public is an offense to all Vermonters,” they wrote in a news release.

The public records request will restore transparency to the process, Republicans said. The administration has 10 days to respond.

Thanks for reporting an error with the story, "Republicans request records of Gruber’s work for Vermont"