In a wide-ranging news conference Wednesday, Gov. Peter Shumlin repeated his commitment to single payer health care but promised to listen to Vermonters who feel he’s moving too fast on that and other issues.

Holding his first full-blown news conference since his narrow victory over Republican Scott Milne in last week’s election, Shumlin promised to “talk, listen and learn” from the results.

Shumlin said he remains an advocate for publicly financed health care but is more concerned with finding alternatives to rising health care costs.

“I believe that moving Vermont to a single payer system of health care will save us money, make us a better state and will improve the affordability that our businesses and individuals are faced with,” he said. “It’s clear that on any issue there was a very clear message to this governor to listen, learn, reflect, be more inclusive. It was humbling. And on every issue I am taking that approach.”

The governor's narrow electoral victory first has to be confirmed by the Legislature. Because neither he nor Republican Scott Milne captured a majority of the vote, lawmakers must select who will be the next governor in January. In final results released Wednesday, Shumlin still held a 2,434-vote margin over Milne, who has not conceded and did not petition for a recount.

Shumlin also announced some changes in his inner circle Wednesday. 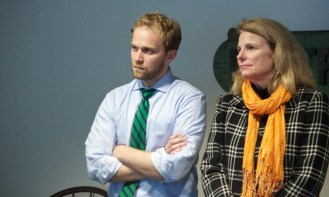 Susan Allen, who has been Shumlin’s press secretary, will become the administration’s top legislative lobbyist and serve as secretary of civil and military affairs. Shumlin’s campaign manager, Scott Coriell, will replace Allen.

He said there will likely be more staffing changes ahead, but offered no specifics. He gave interim Secretary of Human Services Harry Chen a big boost, saying the job was essentially his if he wanted it. Chen moved to the cabinet post from his post as Health Commissioner when Shumlin fired AHS Secretary Doug Racine in August. Shumlin said he was still reviewing other candidates should Chen decide not to accept a permanent appointment.

In addition, Secretary of Administration Jeb Spaulding announced in September he is taking a new job as chancellor of the Vermont State Colleges. Shumlin said he is still vetting candidates for a replacement.

After the announcement, Shumlin fielded questions from the media on issues likely to be taken up this legislative session, including rising property taxes, single payer, budget cuts and energy policy.

While student enrollment has declined, school spending has increased in recent years. This has put upward pressure on statewide property taxes, which have gone up 9 cents in the past two fiscal years.

Last year, the administration did not put forward a plan to restructure the state’s education finance formulas. Lawmakers have made the issue a priority for 2015.

Shumlin emphasized ongoing administration initiatives to persuade school districts to consolidate voluntarily. He said he will ask the Legislature to approve a measure that “prioritizes school spending to any group of communities that make the tough decision to consolidate or make changes to their school structure.”

Shumlin said he has some ideas on how to address school spending, but did not detail his proposals. He did say that the issue should be addressed through a partnership with teachers, parents, school boards and communities.

“We’ve got to work together to figure other things we can do to not only address our spending problem, but our quality problem,” he said.

Shumlin said the state is on track to relaunch the Vermont Health Connect website Saturday. He said he is optimistic that security challenges have been fixed and the online health insurance marketplace will be more user friendly.

“We think it’s going to work,” he said. “I’m not going to over-promise. I’m really hopeful we’re getting it right.”

Republican lawmakers this week urged the governor to scrap Vermont Health Connect and move the state onto a federal health care exchange.

Shumlin said there are challenges in moving to the federal website. First, he said, the state wouldn't be able to make the transfer during the upcoming open enrollment period, which begins Saturday. Second, he said, Vermont offers higher premium subsidies than those under the federal exchange, so switching would mean higher premiums for many Vermonters. Last, he said, the U.S. Supreme Court will consider a case that could put subsidies at risk in states that don't have their own exchange.

“Why wouldn't we give it a chance since we think it’s going to work?” he said of Vermont Health Connect.

According to the state’s Joint Fiscal Office, the state will need to fill a $100 million budget gap for fiscal year 2016. This is in addition to the $31 million in rescissions the administration made in July after the state's revenue forecast was downgraded by economists.

Shumlin said in the next five years the state will have a slower economic growth rate than was previously projected, but he said he will make sure to balance the budget for the next fiscal year and will address “structural” problems in the budget process in the years ahead.

He said in the short term, he prefers budget cuts to tax increases.

“We’ve got to match growth in spending with Vermonters’ ability to pay,” Shumlin said.

When asked if there is any form of a tax on carbon emissions he would support, Shumlin again said he will listen. He has said if he was president, he would pass a carbon tax.

“It’s much more difficult for a small state to do a carbon tax than a region or the country,” he said. “If you have a high carbon tax in a gas station on this side of the Chesterfield (N.H.) bridge and you have no carbon tax on the other side of the bridge, it’s pretty clear what you're going to do to go fill up your tank.”

Shumlin said a carbon tax implemented regionally could be more successful. However, he said he has not spoken with Northeast governors to discuss the policy.

He also declined to comment on whether the Legislature should adopt a Renewable Energy Standard that would require utilities to provide a certain amount of renewable energy to customers.

Thanks for reporting an error with the story, "Shumlin committed to single payer, vows to listen, learn"