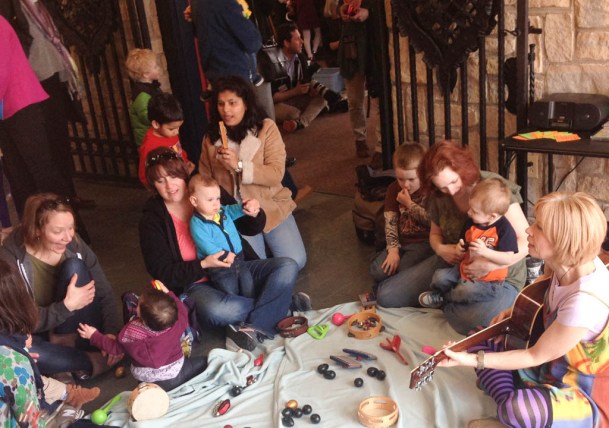 Children sang and played at the launch event for Let’s Grow Kids, a statewide public education campaign about the importance of early childhood experiences. Photo by Hilary Niles/VTDigger

Not all parents are equipped to be good parents, Cary Brown concedes. But among the ready and willing, too many never get the chance.

The consequences surpass parental regret, a panel of speakers suggested Tuesday night in Montpelier at an event moderated by Brown, executive director of the Vermont Commission on Women. When parents can’t provide or afford high-quality early childhood care, their children suffer and society pays.

That was one takeaway from a new documentary “The Raising of America,” that was screened at the event.

The film was preceded by a short presentation on early childhood brain development and followed by a panel discussion, The event was sponsored by the nonprofit Let’s Grow Kids, which is holding a series of 10 film screenings and “community conversations” around the state. Organizers hope to jumpstart discussion about the importance of early childhood care for Vermont’s schools, communities and economy.

Let’s Grow Kids campaign director Robyn Freedner-Maguire said a recent survey revealed that most Vermonters know little about the implications of early brain development. Neuroscientists say that 80 percent of a child’s brain develops before age 3, with another 10 percent forming by age 5. The strength with which a young child’s neurons are connected lays the foundation for that child’s potential throughout life.

But most people don’t know this, Let’s Grow Kids organizers say. And that may help explain why early childhood care is a struggle for so many families: It’s not a priority.

More than a frill 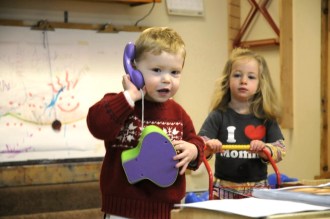 Beth Ann Maier, a retired pediatrician who presented a lesson in “Brain Development Basics 101” to an audience of about 35, said in an interview Wednesday that enriching early childhood experiences are more than a “frill.” Feedback from responsive, caring adults establishes the mental architecture that shapes a child’s ability to grow into society as an adult — socially, educationally and in the workforce.

This isn’t to say that children who don’t receive high quality care at a young age can’t achieve the same results later in life, Maier said. But they face bigger hurdles to success because their brains are likely to be less supple, less adaptive and less adept at problem-solving.

She said it’s hard to draw a line between bad and good child care. “Poor would have them sitting in front of the the TV or laying in a crib,” Maier said. Mediocre child care is harder to describe, and how much mediocrity can be countered by loving parents is hard to say.

“I prefer to think of (mediocrity) as limiting the potential for this very rich architectural framework the brain,” Maier said.

Improvements to early childhood care may be part of the solution to generational poverty, she said.

“We won’t have a workforce if we keep turning kids out who don’t have potential,” Maier said.

Poverty, Maier said, can be a primary cause of inadequate early childhood care.

“The biggest barrier I see is the amount of stress and day-to-day chaos that it takes just to make ends meet,” she said Tuesday night.

The burdens on young families

More than 70 percent of Vermont children under age six come from families in which all parents work outside the home, according to Let’s Grow Kids.

Those children likely spend 40 hours per week or more in daycare, where they may or may not be engaged in ways that promote brain development, Maier said. They often come home to an atmosphere of tension due to financial stress, with adults who are too distracted by their own worries to fully engage their children.

Educational debt is one underlying problem that exacerbates this cycle, according to the film. At a time when many young couples are starting families, their financial burdens are heavier than ever.

Robert Dugger, managing partner of the Hanover Investment Group, also points to an absence of paid maternal leave. Among the world’s richest nations, the U.S. is the only one that does not guarantee this benefit, according to the film.

“Our policies actually actively discourage parents from being able to take care of those kids well in their prenatal months, in their early years, and getting them ready for school,” Dugger says.

Tom MacLeay, treasurer of the Permanent Fund for Vermont’s Children, pointed out the long-term financial costs of poor social development.

A lot of money is spent on behavioral remediation in the educational system, the criminal justice system and the health care system, MacLeay said. Paying for better early childhood care is not a matter of finding more money, but of redirecting money that’s already being spent. The investment offers a better return when it’s made early, he said.

“But savings are so far down the road,” he added. “In the political environment, that doesn’t quite sell.”

Several proponents of early childhood care questioned whether Vermont is ready for such significant social and policy changes. Despite passage of universal pre-kindergarten for 3- and 4-year-olds, other family-oriented policies have faced an uphill battle.

Sen. Ann Cummings, D-Washington, introduced a bill  in 2013 to mandate up to 15 weeks of paid parental leave, but it never came up for committee discussion. Instead, a study committee reported a year later on the potential for establishing employee-funded paid family leave.

Cummings says employee-funded leave is more tenable than employer- or government-sponsored parental leave enjoyed by parents in other countries.

Vermont’s unique economic landscape is dominated by small and very small businesses that don’t have the resources to offer paid leave.

A shortage of quantity and quality

But it would take more than governmental largesse — if that were politically possible — to solve the problems highlighted in Tuesday’s conversation. Nationally, only one in 10 child care programs is accredited. Vermont, like many other states, lacks early child care options in both quantity and quality.

According to Melissa Riegel-Garrett, executive director of the Vermont Association for the Education of Young Children, 60 percent of regulated child care programs in Vermont participated in the state’s rating program as of September 2014. Of those, only 25 percent were rated at 4 or 5 stars, which is considered to indicate “higher quality” care, she said.

Quality child care is particularly in short supply, but there aren’t enough options of any sort to meet demand across Vermont, Riegel-Garrett said.

Panelist Tina Grant, program director at The Children’s Early Learning Space in Waterbury, said the same is true for infant care in her five-star program for infants, toddlers and pre-schoolers. Grant said she’s even taken calls from people before they get pregnant who ask to be put on her waiting list.

Parents do what they must to get by, Brown said. For some, this means sacrifice: whether saving on rent to pay for childcare, or saving on childcare to keep their children fed.

And sometimes, suggests Alicia Lieberman, director of the Child Trauma Research Program at the University of California San Francisco, those sacrifices have consequences not just in the moment, but also down the road.

“The later we start,” Lieberman said, “the more difficult and the more expensive the process.”

Thanks for reporting an error with the story, "Experts, advocates say early childhood development is crucial"