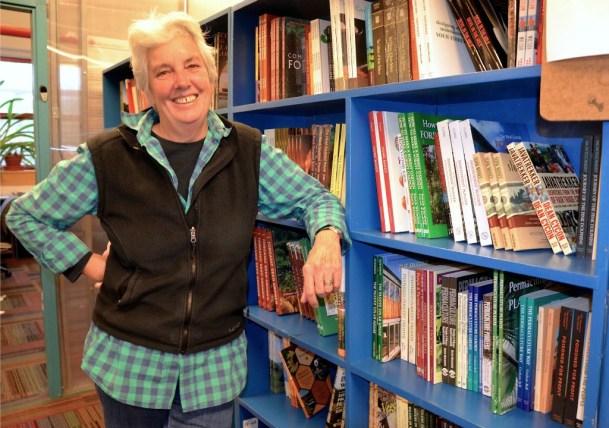 Chelsea Green started out with one unlikely book back in 1984, an eco-fable called "The Man Who Planted Trees." Now co-founder Margo Baldwin has some 250 titles that cram the bookshelves at the publishing office in White River Junction. Photo by Andrew Nemethy

Editor's note: In This State is a syndicated weekly column about Vermont’s innovators, people, ideas and places.

[A]s business plans go, straw houses, tall tales and imaginary elephants are not exactly a reliable formula to bank on.

But that blueprint has worked fine for Chelsea Green, the White River Junction-based publishing house whose sustainable, small-is-good, push-for-justice philosophy reflects its owners Ian and Margo Baldwin and its small-town origins in the Upper Valley town of Chelsea, where the company was founded. 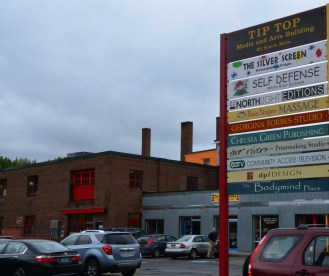 The Vermont publishing company Chelsea Green, founded on the namesake common, has expanded to 20 employees and now operates out a renovated red brick industrial space (rear above) that formerly housed the Tip Top Bakery in White River Junction. Photo by Andrew Nemethy

Perhaps, like many Vermonters, you’ve never heard of Chelsea Green, the book publisher (as opposed to the commons in the namesake village). Think of it as Vermont’s homegrown publishing guru for the do-it-yourself, self-sufficiency and energy efficiency, better health, better backyard (and better world with a hint of doomsday) segment of society. As those folks have grown in number and influence around the country, so has Chelsea Green’s “backlist” of published books, which now numbers around 250.

That growth has not come easy, says Margo Baldwin, who describes herself as “president and publisher, CEO, whatever” of Chelsea Green, a comment she delivers with a hearty laugh – which gives you an idea of her lack of pretension and down-to-earth Vermont vibe.

“Anyone who’s involved with building a business knows it’s a long slog in the early years; you teeter on and off to going out of business. It’s extremely stressful. We’ve gotten to a point now where we’re profitable and we’ve built up a list that, you know, keeps selling year after year,” she says.

Sitting comfortably in her modest, well-computered and w-ifi-ed, book-littered office in the renovated industrial innards of the former Tip Top Bakery in White River Junction, Baldwin is dressed casually in a Vermonty black vest and comfortable checked shirt and jeans. It’s attire that reflect her world: unpretentious focus and attention to words and ideas, though with an ever-present cautious eye on the bottom line – a habit born of many lean years. That line is felicitously printed in black these days, but is colored with a view of the world that is humanistic, iconoclastic, practical and thoughtful – just like the backlist. 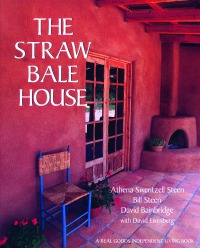 "The Straw Bale House" has been one of Chelsea Green's best-sellers since it was published in 1994.

Which brings us back to the offbeat books that ensured and sustained success against odds that were as big as, well, a straw house. One would be “The Straw Bale House,” which has seen more than 150,000 copies sold since it was published in 1994. Not even wolves like Amazon can blow that house down.

“'Straw Bale House,' which was a big seller for us, kept the company alive for a number of years,” Baldwin offers.

The tall tale is “The Man Who Planted Trees,” perhaps Chelsea Green’s most unlikely life preserver. It’s a 1953 French eco-fable whose publishing story, as Baldwin relates, is sort of a legend in itself: Solicited and then rejected by Reader's Digest because it was fictional, eventually printed by Vogue magazine, and then picked up as the first title put out by Chelsea Green, in 1985. The short inspiring story has sold more than 300,000 copies, and its ecological moral gets more relevant every day. 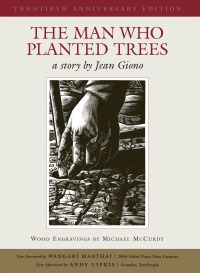 "The Man Who Planted Trees" was the first book Chelsea Green published, in 1984, and the eco-fable continues to sell, tallying more than 300,000 copies.

And then there’s the pachyderm, as in the best-seller, “Don’t Think of an Elephant,” a book taking a progressive look on how to frame political debate. It has crossed the 200,000 sales mark and was recently re-issued and updated – with kudos from Vermont’s own Howard Dean and luminaries such as Arianna Huffington and Robert Reich.

Interspersed in the backlist list are four New York Times best sellers – the most recent being Sandor Katz’s “The Art of Fermentation” – and classics by Helen and Scott Nearing and gardening guru Eliot Coleman, Chelsea Green’s best-selling author (a friend who once planted a garden for the Baldwins). There’s a distinct Green Mountain flavor in the list, which counts Former Gov. Madeleine Kunin’s “The New Feminist Agenda,” Wolcott poet David Budbill and Barnard restaurateur and author Deirdre Heekin among the authors. 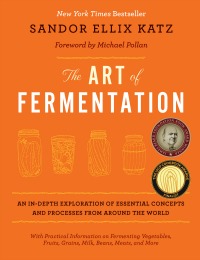 Sandor Katz's book on "The Art of Fermentation" is a New York Times best-seller, one of four the Vermont-based Chelsea Green has published.

For a long time, though, Chelsea Green’s avowed niche advocating social and environmental responsibility and “effecting cultural change” was a thin slice.

“We’ve been way ahead of the curve on lot of these subject areas,” says Baldwin, noting many of its books “were so ahead of the time they didn’t work.”

“It’s been a big frustration over the years that we keep publishing these things and the world doesn’t keep getting it,” says Baldwin.

No longer. As it hits three decades, Chelsea Green has found a sweet spot, practical to inspirational, political to ecological, publishing around 25-30 books a year. It tallies around $5 million in sales, says Baldwin, employing around 20 people, some at a new office in Burlington. If you want to learn how to build a wood-fired oven, raise hot peppers, mushrooms or awareness, explore energy conservation and permaculture, Chelsea Green has you covered. Hot-button issues? It’s dived in on GMOs, Lyme disease, raw milk, industrial poisons, climate change and Wall Street values.

But Chelsea Green is hardly a predictable, reflexive liberal voice, reflecting Baldwin’s own outlook and Vermont experience, which she describes as being on the “small-scale, small-state E.F. Schumacher end of things” (Schumacher wrote the iconic book “Small is Beautiful.”) While she has a dire view of where the planet is headed, she has no problem taking on dogmas or liberal convention.

Witness one of the latest books, “Defending beef: The Case for Sustainable Meat Production.”

“The idea that people should stop eating meat,” she says becoming animated, “there’s a lot of mythology around cows you know. Cows are not bad. They’re good, because if managed correctly on pasture they help build soil and sequester carbon.”

The Baldwins never intended to run a publishing company when they escaped the city (Brooklyn, N.Y.) in 1982 for the country life in a beautiful brick house owned by her stepfather in Vershire.

“Ian was going to become a therapist, I was working in the health care industry,” she says. But with their need to make a living, Ian “dusted off his publishing skills,” and they launched Chelsea Green right next to the courthouse in 1984. 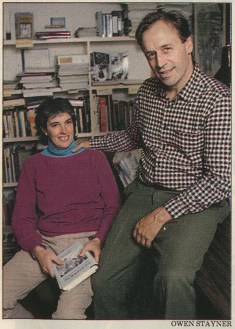 Co-founders Margo and Ian Baldwin posed for this photo for Newsweek in the 1980s when their new publishing company with a progressive focus, Chelsea Green, was in a small office in the town of the same name.

The rural and social environment they found in Vermont greatly influenced their view of the world and the ethos of their publishing venture. “We definitely, when we came up here, changed,” she says, and ties to what Vermont represents run deep: “Every time you leave the state and then you see what’s out there in the rest of America, and ugh, you want to go back to Vermont.”

That ethos permeates the way she runs the company, which she has done since 2002 (Ian stepped away in the late 1990s to pursue artistic and other interests). Chelsea Green prints in an environmentally sound way, in North America instead of China; keeps distribution in-house and provides extensive volunteer opportunities to staffers. “It’s a fun little company; everyone gets along. There’s a sense of comradeship and good morale,” she says.

In 2012, she did something to preserve that, converting to an employee-owned company by forming a so-called ESOP, in which employees own the business through shares. She is passionate about keeping Chelsea Green independent and not subsumed into some larger publishing concern that promises to continue its mission. “They wouldn’t do it – that never really happens,” she says.

The ESOP model has ensured Chelsea Green will remain local and continue voicing views that may be ahead of the curve, a goal Baldwin is adamantly committed to “after all the work and blood and sweat and tears.”

As it turns out, some fables – like a small Vermont publishing company beating the odds and the drums – can actually come true. 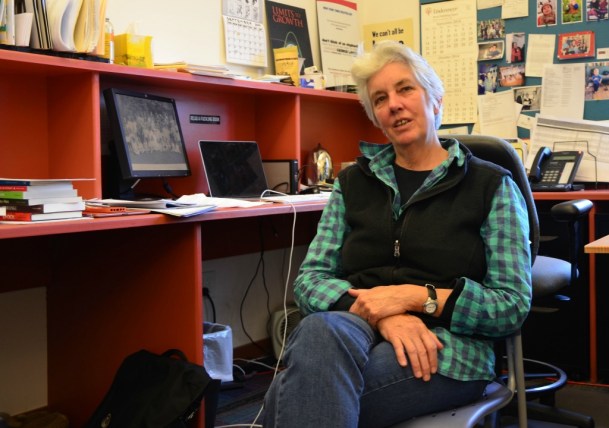 Margo Baldwin talks in her office in White River Junction about the evolution of Chelsea Green Publishing, which she started with her husband Ian in 1984. It now occupies a thriving progressive niche and has a backlist of around 250 books, and counts four New York Times bestsellers. Photo by Andrew Nemethy Thanks for reporting an error with the story, "In This State: Progressive publisher Chelsea Green has found a novel ..."