Shumlin’s 1040 IRS form shows most of his income comes from real estate he owns and rents. He reported $128,639 in wages and $349,091 in income from real estate, royalties, supplemental income and trusts. 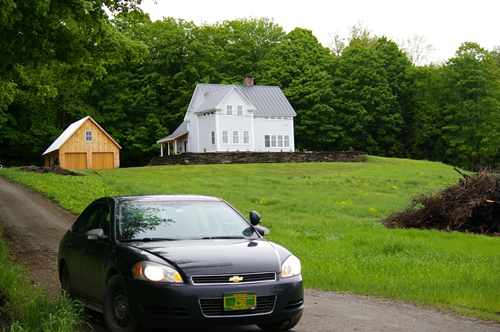 Shumlin claimed his two daughters, Olivia and Rebecca, as dependents, listing himself as the head of household. Shumlin paid $120,000 in alimony to his ex-wife, Deborah Holway, last year, the return shows.

They include 16 properties with a value of $3.8 million. Seven properties are in Brattleboro, four in Westminster, two in Putney and one in East Montpelier. He also listed a house, cabin and land in Cape Breton, Nova Scotia, and land on the island of Dominica.

Shumlin owns seven vehicles worth $128,300. They are a 2002 Volkswagen Passat, three Dodge trucks, a 1964 Porsche, a Grady-White boat and miscellaneous farm equipment.

The governor also has $2.2 million in investments in retirement funds, $3.3 million invested in equities/cash and $1 million in stock of Putney Student Travel, where he was co-director until he became governor.

The governor has a mortgage for various properties in Brattleboro worth $120,000.

On his return, Shumlin checked a box to contribute $3 to the presidential election campaign fund.

None of the other candidates for governor -- Republican Scott Milne, Libertarian Dan Feliciano, Pete Diamondstone of the Liberty Union Party, or independents Emily Peyton, Cris Ericson and Bernard Peters -- have released their tax returns. Milne said he intends to release his next month.

Thanks for reporting an error with the story, "Shumlin tax filings show $10 million in assets"