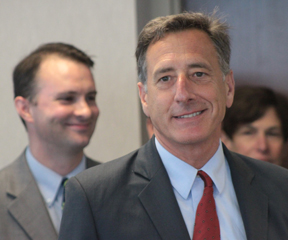 A fundraising party for Gov. Peter Shumlin to be held by a lobbyist and an advocate for single payer health care is perfectly appropriate, the organizer says.

KSE Partners lobbyist Todd Bailey is co-hosting a fundraiser for Gov. Peter Shumlin at his parents' Middlesex home this month.

Among Bailey’s co-hosts is Tess Taylor, who stepped down as House majority whip this year to become executive director of Vermont CURE, a single-payer advocacy nonprofit group that is one of Bailey’s clients.

Shumlin will work with lawmakers this session to craft a single-payer health care program, and Bailey and Taylor will be at the Statehouse working to influence the process – as will many others.

There’s no conflict in hosting a fundraiser for the governor, Bailey said. 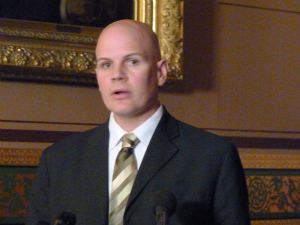 “Campaigns are funded through private donations and every lobbyist in the state of Vermont is going to participate in some type of fundraising activity,” he said Friday. “This is how the system functions. We’re simply exercising our constitutional rights.”

KSE Partners is highly regarded in Montpelier, and Bailey has built an impressive list of clients and a reputation as a major player in Vermont politics, Stannard said.

Brady Toensing, vice chair of the Vermont Republican Party, and a prominent conservative attorney, said the fundraiser's list of co-hosts “certainly does not look good.”

“One is the executive director and the other is the lobbyist for a nonprofit, issue advocacy organization that was vetted and approved by the governor,” Toensing wrote in an email.

Toensing is referring to a Seven Days report in which the governor said he was briefed on Vermont CURE and its mission, and said he welcomed its support for single-payer.

“Now, here they are organizing a fundraiser that makes them appear to be intertwined with the political operations of the governor’s campaign,” Toensing said.

The situation is illustrative of “just how farcical all the complicated campaign finance and lobbying rules and regulations really are,” he added.

Politics in general, and lobbying in particular, is all about those relationships, and while hosting a fundraiser doesn’t hurt one’s ties to a candidate, it can’t cement them either, Stannard said. At least, not in Vermont.

“The money isn’t big enough here,” he said, suggesting that in other states and at the national level that might not be the case.

“You can treat them right and hope you get a little more time with them, but if the ideas you’re pushing are out of sync with theirs, it’s not going to happen,” Stannard said.

If other people feel their voice isn’t being heard, Stannard suggested they throw their own fundraisers. One could start small by inviting a representative over, and asking friends to show up and support them, he said.

Bailey’s fundraiser asks attendees to donate between $50 and $500. Shumlin’s campaign can accept donations of up to $2,000 from individuals and corporations.

“Gov. Shumlin is grateful for the tremendous support he's received for his campaign and is glad to have the opportunity to visit with supporters at house parties like these,” Erika Wolffing, the governor’s campaign finance director, told Seven Days regarding the fundraiser.

Thanks for reporting an error with the story, "Lobbyist, single-payer advocate among hosts for Shumlin fundraiser"