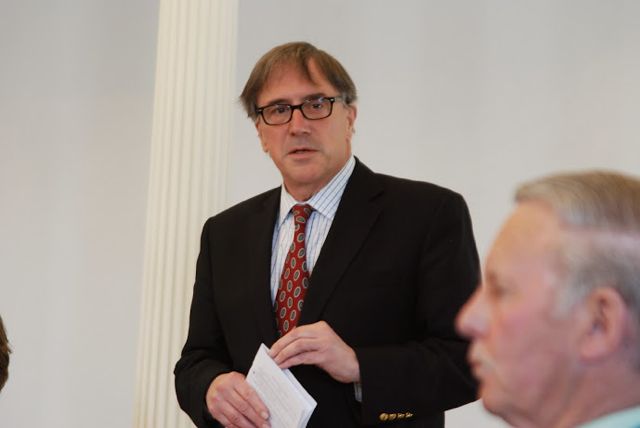 The Townshend Democrat said his growing involvement in an informal effort to find a political solution to the Syrian civil war won’t allow him to continue serving as a state senator.

Galbraith, 63, said he has become more involved in working with the Kurdish and Christian communities in Syria to help them develop strategies to protect their interests in that process.

He was an adviser to the Kurdish regional government in Iraq when the country was drafting its constitution in 2005, and said his involvement with the Kurds goes back 30 years.

Galbraith has had a long career in Foreign Service, serving as ambassador to Croatia and for the United Nations in Afghanistan. His father was the influential economist John Kenneth Galbraith.

While in the state Senate, Galbraith was known for his sometimes lengthy floor speeches and his willingness to buck his own party on some issues.

His counterpart from Windham County, Democratic Sen. Jeanette White, could not be reached Monday, but she has filed paperwork to seek re-election with the Secretary of State.

Democrats have two other candidates who will vie with White for Windham’s two Senate seats, according to a party spokesman.

Joan Bowman of Putney, who has worked for several community groups and as a navigator for Vermont Health Connect, is a candidate, according to Ben Sarle, the party’s communications director. Becca Balint of Brattleboro, an educator and former member of the town’s development review board, also intends to run, Sarle said.

“We’re very excited about that race and it’s wonderful to see three Democratic women stepping up for this,” he said.

David Sunderland, chairman of the state Republican Party, said the GOP is recruiting candidates statewide, but does not have a candidate for Senate in Windham County.

Galbraith said he was proud of his accomplishments in the Senate, which he said included helping Brattleboro become eligible to build a net-metered solar facility and giving property tax relief to Vernon after the impending loss of Vermont Yankee. He also touted his role in banning fracking in the state and introducing the first concrete plan to finance the state’s proposed single-payer health care system.

Galbraith said he had disappointments as well, such as not being able to pass legislation banning direct corporate contributions to candidates in the state and not being able to do more to protect forest land.

His strong base in Windham County and his lack of political ambitions for higher office allowed him to be an independent voice within the Democratic Party, Galbraith said.

“I think I did many things that antagonized the powers that be,” he said. “But I think they realized that I was not going to be subject to pressure.”

Though his single-payer financing proposal did not gain traction in the Legislature, he maintains that the mix of taxes he proposed is still the only viable way to finance universal public health care in Vermont.

Galbraith thanked the voters of Windham County for their support and wrote in an email that, “I intend to remain engaged in the affairs of the community and state that has always been my home, but, for the time being, I will do so under the title of citizen.”

Thanks for reporting an error with the story, "Galbraith leaves open seat in Windham County"