The Shumlin administration says Monday’s midnight deadline for signing up on Vermont Health Connect for Jan. 1 insurance coverage still stands, but they’ll be “flexible” through Friday.

At a news conference Monday in Winooski, Mark Larson, commissioner of the Department of Vermont Health Access, told reporters, “We have clearly emphasized the importance of signing up today.”

But, Larson continued, “We are going to be as flexible as we can with people who missed the deadline this week.” 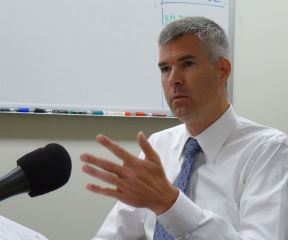 Mark Larson, commissioner of the Department of Vermont Health Access

Does that mean the deadline’s been extended by four days? Not so, according to the commissioner — “The deadline remains today. We are still encouraging Vermonters to sign up today.”

Still, if someone misses it, Larson suggested that they might not have to forgo coverage. He continued: “We will continue to be as flexible as we can during the week as we continue to work with the carriers and our premium processor to make sure we can help Vermonters through those steps they need to get through in order to have their coverage in place.”

The Shumlin administration’s announcement comes on the day a story from The Washington Post revealed that the Obama administration extended the deadline for signing up on the federal exchange by 24 hours, without announcing it.

For just about everything you wanted to know about the state's health care exchange, but were afraid to ask, go to VTDigger's user's guide to Vermont Health Connect.The guide includes an interactive chart that helps you find your estimated subsidy level instantly.

Politico reported Monday evening that several states — New York, Massachusetts, Washington state, the District of Columbia and California among them — have either extended their deadlines or offered “flexibility” to people who have started but not completed their applications.

The administration estimates that 65,000 Vermonters needed to sign up for coverage starting Jan. 1. As of Monday, roughly 20,000 individuals had signed up. Another 30,000 were enrolled by their small business employers, who signed up directly through BlueCross BlueShield of Vermont or MVP.

The remaining 15,000 fall into three categories — individuals on private plans, individuals on VHAP or Catamount, and people currently receiving coverage through a small business employer. Regardless of which category they fall into, administration officials say people’s coverage will automatically be extended three months into the new year, if they fail to sign up on time.

Larson said employees will work through the holiday week to process applications and invoices. But the call center, normally open from 8 a.m. to 8 p.m. Monday through Saturday, will close at 4:30 p.m. Tuesday (Christmas Eve) and reopen at 8 a.m. Thursday.

The call center is closed Sundays, and the administration did not make an exception this week, despite today’s deadline.

“We did explore that. We were not able to have the call center open though,” Larson said Monday.

The commissioner also sought to clear up last-minute confusion for people negotiating the transition from one plan to another at the start of the new year.

The Dec. 23 deadline is for picking a plan, not for paying for it. But among individuals who have made their plan selection, there’s still confusion about when their coverage takes effect, the date by which they need to pay, and whether they can see physicians and fill prescriptions in the meantime.

Larson urged people to pay as soon as possible, but he said as long as they postmark their check — the online credit card payment function has yet to be launched so people must pay by mail — by the date listed on their invoice, they will be covered on Jan 1.

Vermonters can view their invoices one day after enrolling, and paper copies are mailed within three to seven days, according to Larson. After people mail in their checks, there’s up to a one-week lag before the payment is processed.

But even if this process extends into January — and even if people don’t yet have their insurance cards in hand at the start of the year — they can still receive coverage, Larson said. They’ll have to pay out-of-pocket for any costs accrued before their checks are processed, but they can contact their carrier to be reimbursed after.

Even so, Larson encouraged people to fill important prescriptions before Jan. 1 to avoid having to pay for them upfront during this period.

Those who haven’t received their insurance cards in the mail can call their carriers to get their policy number, which can be used in lieu of a card.

The open enrollment period lasts through March 31. People need to sign up by the 15th of the month prior to when they want their plan to start. Those who miss the Jan. 1 deadline will be ineligible for a federal subsidy for that month only, not for the entire year. If they sign up by Jan. 15 for February coverage, they can, for example, access a subsidy starting in February.

Thanks for reporting an error with the story, "State offers 'flexibility' to those who missed Monday's health insura..."