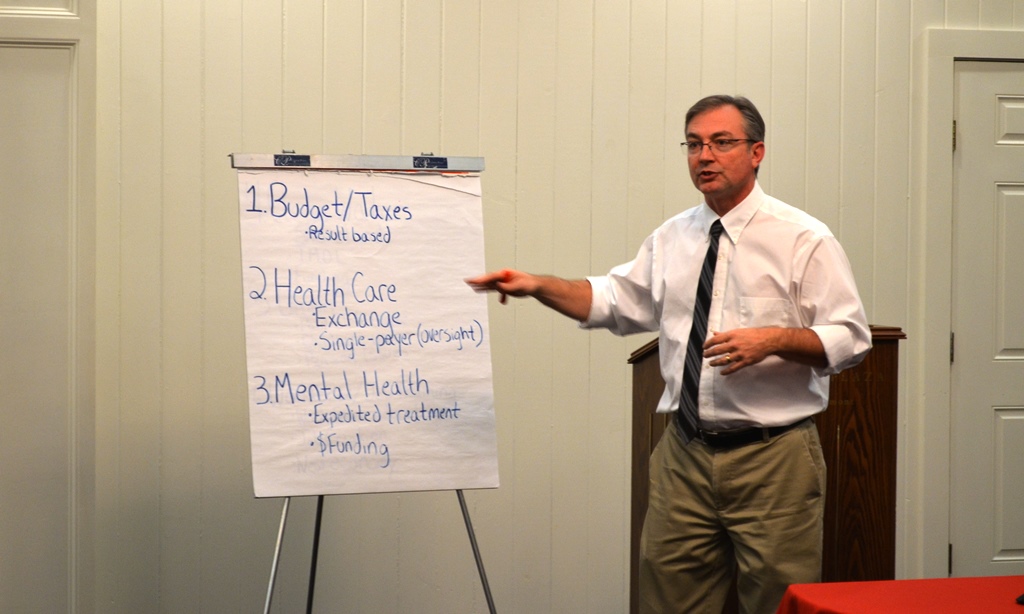 Bridging a $70 million budget gap, monitoring Vermont Health Connect and taking stock of the state’s mental health system are the main concerns for Senate Democrats in 2014.

Nearly everyone in the 23-member caucus convened at the Capitol Plaza Hotel on Thursday in Montpelier to pinpoint their priorities for the 2014 session.

Beyond the big three, there was a widespread scope of agendas among lawmakers.

The Democratic senators placed several bills, which passed in the House but hit snags in the Senate, high on the list for 2014. Among them is legislation to stiffen regulations on the development of lakeshores, a bill to allow child care workers to unionize, and one to mandate paid sick leave.

The priority-setting exercise spurred a series of impromptu speeches from senators.

Sen. David Zuckerman, P-Chittenden, strategized about one of his longtime goals — legislation to label GMO foods, which passed the House passed last session and will be assigned to committee in January.

The topic of wind appeared no less contentious than the year before, when Rodgers was a ring leader for a bill that would have placed a three-year moratorium on large-scale wind projects.

Thursday, Rodgers test-drove a new argument against the projects: That turbine production has degraded the environment in China.

“There’s a lot of heat and light in it,” Sen. Mark MacDonald, D-Orange, observed, before steering the conversation back toward the budget.

On the issue of flat wages, several Democrats lined up behind a bill to raise the minimum wage. Peter Galbraith, D-Windham, who joined the gathering by phone, from Paris, proffered the legislation as one solution.

Shumlin, when asked about it, pledged to be open-minded, but made no promises.

“I’m willing to enter into any conversation about ways to ensure we have an equitable minimum wage,” Shumlin said. But, he added, “Obviously with everything we do, the devil is always in the details.”

Shumlin and Campbell reassured the caucus that the budget gap, though sizeable, is nothing new and can be addressed without, as Shumlin put it, “sticking it to the most vulnerable Vermonters.”

But not all caucus members echoed their optimism. “We have seen this movie five times,” MacDonald said, and once again, “it feels like the script has been written for us.” He described the lawmakers’ role as doing damage control for the impact of cuts on middle and low-income Vermonters.”

“We appear hopeless in how we as a state legislature can make a difference and then we take great pride in the things that we work hard at to see that it happens gently,” MacDonald said. “I’ve said to a couple colleagues in the Senate that one of the things we do as a Democratic caucus is go out to the public and say, ‘Gee, things are really bad but they’d be even worse if the Republicans were in charge, and I don’t know how many years in a row we can do that.”

Several senators made calls to action for addressing opiate addiction, as did Shumlin who said he’ll propose solutions to the Legislature at the start of the session. “I am willing, as governor, to have the courage to do things differently despite the risks.”

Senate President Pro-Tem John Campbell, D-Windsor, and Shumlin offered the same message on health care — look past the naysayers and those prone to “embellishing” the problems with Vermont Health Connect and the challenges of transitioning to a publicly financed system.

“I understand there are problems and there are going to be people who are going to take that and they are going to try to embellish that,” Campbell said. “I would hope that each and every one remain committed to the goals we set forth when it came down to talking abut health care for all Vermonters.”

Shumlin repeated the same message he delivered to House Democrats last week, asking them to plow the ground for single payer.

Thanks for reporting an error with the story, "Senate Democrats set legislative priorities"