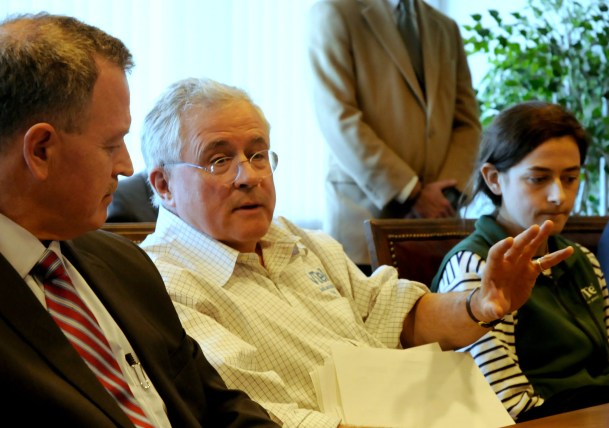 Despite conceding that Vermont will miss his target of statewide broadband and cellular coverage before year’s end, Gov. Shumlin Wednesday gathered top telecommunications executives to celebrate how far they’ve come.

In early January 2011, Shumlin created Connect VT, “an ambitious plan to deliver broadband and cell service to every corner of Vermont,” he said soon after in his State of the State address.

At least $174 million of federal funds, millions more of state money and an untold amount of private investment by telecom providers has been poured into the effort since 2010. According to a congressional aide, Vermont’s share of stimulus funding for broadband buildout surpassed all others when measured by funding per capita.

To deliver a progress report, Shumlin was joined by representatives from FairPoint, AT&T, Sovernet, EC Fiber, Verizon, VTel and Comcast at a press roundtable on broadband service Wednesday afternoon in Montpelier.

The tally: About 3,000 homes still lack high-speed Internet service, he said. He underscored that the number represents less than 1 percent of residences in the state. Of those homes without service, solutions have been identified for the vast majority, though connection dates remain elusive. Five or fewer locations still remain without any solutions figured out, he said.

“From an economic development standpoint, from a quality of life standpoint, this is huge,” Shumlin said.

He stressed that high-speed Internet connections are necessary for modern job creation, tourism, public safety, energy delivery and education. The Federal Communications Commission also cites broadband connection as essential for democratic engagement, and some in attendance pointed to business and health care benefits, not to mention interpersonal communications.

As people come to expect more from technology and use more devices to connect to the World Wide Web, infrastructure struggles to keep pace. The state’s working definition of “high-speed,” in particular, is up for debate.

Jim Porter, director of telecommunications for the Public Service Department, said state regulators take cues from the federal government’s standards for grant funding, which is typically 4 megabits per second (Mbps) upload and 1 Mbps download speed. When asked the minimum speed that qualifies as “high-speed” in Vermont however, Porter responded with a different federal standard.

“I think the FCC continues to define 768 Kbps/200Kbps service as broadband service,” Porter said, describing rates about one-fifth of the higher standard.

In fact, the FCC upgraded its definition of “broadband” to the 4/1 standard in its Sixth Broadband Progress Report, in 2010. At the time, the commission admitted that the upgrade was already “long overdue.”

But speed is not the only consumer consideration in question. The state’s 2011 Broadband Telecommunications Plan also laid out pricing “on par with national urban areas” as a desired outcome by the end of 2013.

A clear profile of pricing was not available at the press event, however. Campbell said the question is best directed to individual providers.

Connection gaps, debatable speed of the network that does exist, and unclear comparative cost of Internet services are not enough to dim the enthusiasm of David Weinstein, a senior policy analyst for Sen. Bernie Sanders. He said federal funding agencies see Vermont as ahead of the curve.

“Some of the projects certainly are are moving along a little bit slower than we had hoped — not unusual,” Weinstein said. But federally funded telecom infrastructure projects “are starting to pay dividends,” he said. “When this is all built out, we’ll have one of the fastest speed networks in the entire country.”

In the meantime, Secretary of Administration Jeb Spaulding is more than satisfied with Vermont’s progress so far.

“I think most Vermonters would be very impressed that we’re getting over 99 percent coverage by the end of 2013,” Spaulding said.

Sitting in for the governor when Shumlin had to leave the roundtable early, Spaulding said the effort has been largely successful. “I think (the governor) is excited and thankful and gratified for the progress we have made, and I think for all intents and purposes, we have hit his target.”

That said, Spaulding said, the work is not done.

“This is not a marathon. This race doesn’t end,” Spaulding said. He acknowledged that improved speed and affordability, plus greater digital literacy, are constant goals.

Spaulding also speculated that some Vermonters who complain about slow or lacking Internet service may not be aware of the connections available to them. He encouraged anyone with limited options or experiencing problems with their connections to contact the Vermont Telecommunications Authority or the Public Service Department for assistance.

For those with access to the Internet, the state’s website BroadbandVT.org offers an interactive map to find service options in your neighborhood, a “speed test” and an online form to report an unserved address.

Thanks for reporting an error with the story, "Shumlin celebrates broadband progress, though target is missed"